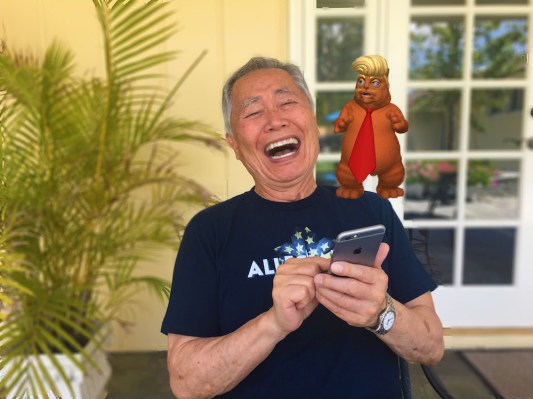 Anyone who follows George Takei on Twitter can tell you that Star Trek‘s original Sulu is not a fan of President Donald Trump. But he’s found a new way to express that criticism — not just in tweets, interviews and op-eds, but also in an augmented reality app called House of Cats.

The app was built in partnership with Montreal-based development company BMAD, and it allows users to interact animated animal characters like Trumpy Cat, Meowlania, Vladdy Putin and Lil’ Rocket Pug. They can add their own voice recordings, superimpose the animals on real environments and take photos with them — Takei suggested including Trumpy Cat in photos of real-world protests.

When I asked where the idea came from, Takei had a simple explanation : “The Internet loves the combination of politics and cats.”

While the app looks pretty silly, Takei made the by-now-commonplace observation that satire is having a hard time keeping up with the daily news.

We spoke shortly after Trump had his press conference with Vladimir Putin — setting off this week’s cycle of criticism, denial and missing double negatives — and Takei told me, “No augmented reality could have created the true reality of what we saw this morning: Donald Trump standing shoulder-to-shoulder with Vladimir Putin … his denial of the attack on the core activity of our democratic system.”

Takei added that humor is a key ingredient in getting a serious message out into the world. He’s pointed to his embrace of memes (particularly Grumpy Cat) as one of the main drivers of his popularity on social media, which in turn gives him a bigger platform for his political views.

“I’m a political activist — I have been since I was a teenager, largely because of my childhood incarceration behind American barbed wire fences,” Takei said. He said his social media presence is meant to be an extension of that activism, but, “I notice that if I’m documenting the truth, people are nodding off. [So] I try to kind of inject a little humor into it.”

The app costs 99 cents, and there are plans for subscription content as well. It might seem strange to pay money for a satirical cat app, but keep in mind that some of the profits will go to Refugees International.

“Making a mockery of this particular person is going to be a very effective tool,” Takei said. “We’ll have fun while we also accomplish our mission to make this a better America.”

Google Drive will start to delete trashed files after 30 days

This WhatsApp feature could make it even more secure