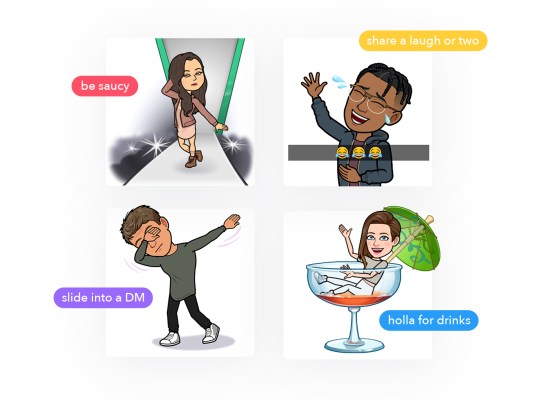 Tinder will begin testing Bitmoji in its app in Canada and Mexico, the company announced today. The new integration comes courtesy of the recently launched Snap Kit, which allows third-party apps to take advantage of Snap’s login for sign-up and features, like its Snap Map and Bitmoji, among other things. In Tinder, users in the test regions will be able to send the Bitmoji to their matches within their chat conversations.

Tinder was one of Snap’s debut partners for Snap Kit, along with Patreon and Postmates. However, it hadn’t yet launched the integrations until today.

“With our Bitmoji integration, we’re giving users a playful new way to engage with matches. This is just one way we work with partners to add features that encourage users to experiment with more personalized ways of chatting; in this case, it’s the freedom to get creative with avatars,” said Tinder Chief Product Officer Brian Norgard, in an announcement.

This isn’t the first time Tinder has added functionality to enhance its chat experience. It already offers the ability to use emoji, and, thanks to a 2016 partnership with Giphy, users can send GIFs to matches to help break the ice and have more playful conversations. 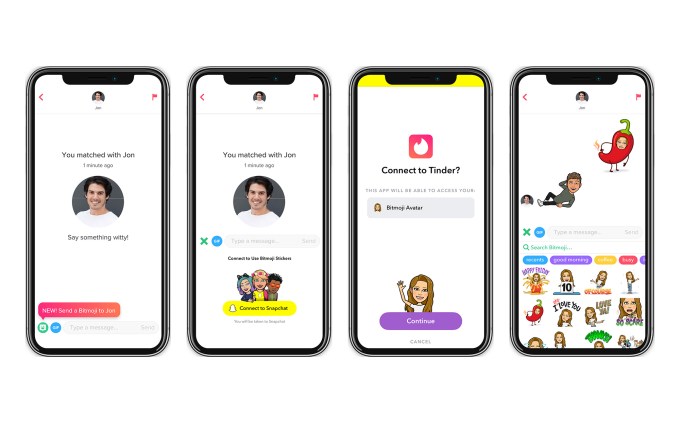 For those who have access to Bitmoji, the option will appear in place of the emoji button in the chat interface. When you press the green Bitmoji icon (next to the GIF button) for the first time, you’ll have to tap “Connect to Snapchat” to authenticate.

From then on, you can search across your Bitmoji collection using keywords in the search box, or you can tap on the color-coded bubbles that aggregate commonly used Bitmoji expressions like “good morning,” “coffee,” “busy,” and others. You can also tap on “recents” to find those you have used in the past.

Tinder has been running a growing number of experiments as of late, having launched tests of things like Tinder Places for finding matches you may cross paths with, A.I. suggestions on who to “Super Like,” a real-time feed of social updates, curated selections called Tinder Picks, a video feature called Tinder Loops, and more, over the past six months or so. The video feature rolled out globally earlier this month, which indicates that at least some tests will turn into product features for all to use.

Tinder says the Bitmoji feature is in testing in Canada and Mexico, but didn’t confirm if or when it would roll out to other markets, like the U.S.

Social network App Snapchat currently down for some users