Feeling the Force: are shared VR experiences the future of entertainment? | Tech News

Earlier this year, I went to The Void’s Star Wars: Secrets of the Empire virtual reality experience. In a specially designed pop-up in the middle of a London shopping complex, a group of friends and I were equipped with a PC backpack, haptic vest and modified VR headset before we infiltrated an Imperial base on Mustafa.

It was the best VR experience I’d tried for a whole host of reasons. It required zero set-up, the Star Wars tie-in was spot-on (even for die-hard fans), there was lots of shooting, plenty of puzzles to solve and clues to find, and the hardware felt high-end and performed well – it was great to roam around in VR untethered, and the haptic suit meant I could feel what was happening in front of me. And, most importantly, I was able to experience all of this with my partner and two friends by my side.

The force is strong

One of the latest (and greatest) in a string of location-based VR experiences, Secrets of The Empire points to the huge potential of using VR to really bring people together, both physically and in a virtual space – and it turns out it was designed with exactly that in mind.

We asked Ian Bowie, Lead Experience Designer for Star Wars: Secrets of the Empire at ILMxLAB, Lucasfilm’s Immersive Entertainment division, what the thinking behind including a group of friends in a Star Wars story (and allowing them to connect within it) was. 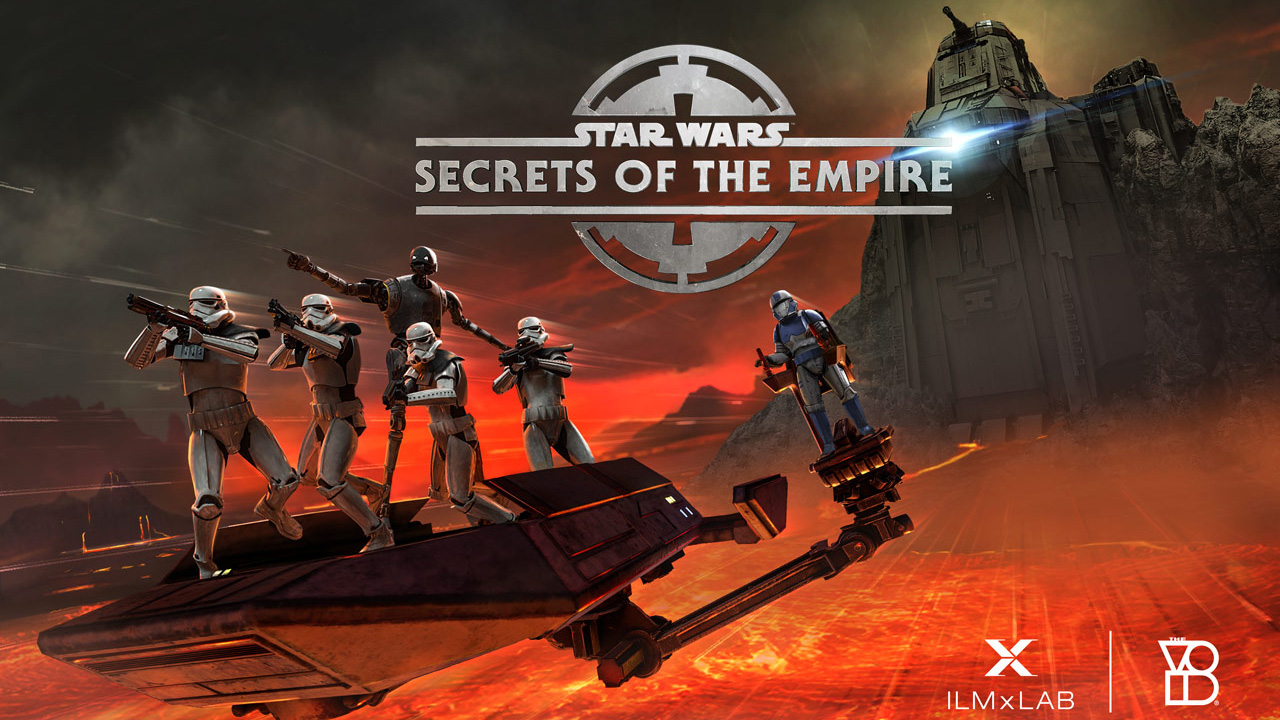 “We set out to create an experience where each individual feels like they are the main characters of your own Star Wars adventure,” he explained. “One of the most important design decisions we made when creating the social element was to give guests room to socialize.”

The experience itself is an immersive whirlwind, and Bowie told us there’s a lot going on in terms of technology choices, appealing to the players’ senses with sensations and touch, but most importantly, storytelling.

“Providing moments without dialogue from digital characters, opportunities to strategize, co-operate, react, discover, explore or even argue… these intended vacant spaces in the design make the experience successful and meaningful on an individual level,” he said.

And part and parcel of the social VR experience is ensuring that everyone felt like they were an important part of a real adventure.

“Creating this room for guests within the greater context of the planned story allows them to create personal sub-context to the adventure and have their own unique stories to tell, about not just what happened in our story, but how they as a group responded to it,” Bowie explained.

So, one day soon will we be trading a trip to the cinema or bowling alley, or meeting friends at a bar, for a location-based VR experience? And can a medium that seems inherently isolating really be used to deepen social ties and create connections?

Does VR have an isolation problem?

There are plenty of VR experiences that are focused on encouraging people who are in different locations to come together and socialize, like Facebook Spaces. But physically you’re still very much on your own when you wear a headset at home. By its very nature VR is isolating because you need a dark space away from distractions to feel truly immersed.

But VR may also have an isolation problem when it comes to public perception. The media heavily focuses on the social isolation concerns around VR use, which are perpetuated by its portrayal in entertainment, like Ready Player One, which may bring people together in The Oasis, but keeps them very much apart in the ‘real world’.

But let’s not forget that VR is still an emerging industry. Many of us have been forced to try it on our own because there are barriers to entry, like costly headsets and PCs and a lack of space in the home. That means experiencing it with other people often just isn’t possible – and that’s where the appeal of location-based VR lies.

Going to a physical space with others and venturing into a virtual world doesn’t always have to involve action, total body immersion and an eye-watering budget. The presentation and implementation of arts VR can benefit from an added social element too – the arts have, after all, been fueled by discussion, collaboration and connection for millennia.

“One of the great things about what the industry calls ‘in-location VR’ is that it turns into a fun leisure activity that you can do with your friends,” award-winning VR specialist Catherine Allen from Limina Immersive tells us.

“At Limina we frame VR as an arts experience, a bit like seeing some immersive theatre or watching an indie film. We have run many arts VR events across the UK and at festivals, and, as you’d expect, people tend to come in groups.”

Allen believes one of the benefits of the way Limina sets up these experiences is the discussions that take place afterwards, and the connections this leads to. “The feedback has been awesome,” she adds. “People love the opportunity to fully immerse themselves in the content and then discuss their experiences afterwards, often in the bar, with the people they’ve come with.”

“Audience members can come out with what is often a very different perspective on the same VR experience. This makes it a perfect jumping-off point for conversation. After taking off the headset and leaving our VR theatre, people often say to each other ‘So, how was it for you?’”

Solid storytelling, good hardware and a seamless set-up are clearly key to the overall VR experience, but so is what guests feel and experience before and after. The storytelling element doesn’t stop when the VR story stops.

“At the end of the day, it allows each guest to walk away with their own memory of the experience,” Ian Bowie says. “Each is unique, and therefore more personal than anything we could design for them.”

He adds: “My favorite moment of witnessing the value of social VR in action was seeing a group who had been randomly paired together coming out of our Anaheim location at Downtown Disney exchanging email addresses. The four of them had become friends as they took on the Empire together! I love that they were able to build a friendship out of their shared experience.”

The rise of location-based VR

Location-based VR isn’t exactly new – a number of VR arcades have been in operation around the world for some time. Brands are also bringing VR experiences to the masses more and more, like Imax VR, which has created dedicated spaces for people to enjoy VR experiences alone or with friends.

There’s a lot of appeal to trying VR beyond the confines of your own home. There’s less of a financial commitment, no set-up required, and you don’t have to have a big room at home to get the most from it. But it’s also appealing because other people are there – even the most socially awkward of us thrive on making connections with others.

That’s why it’s no surprise that a number of companies have been working on similar experiences to The Void, including Nomadic and Dreamscape Immersive. But unlike VR arcades, where you can’t all experience the same VR world at the same time and go on an adventure inside it, they’re about full immersion and connection with others within the virtual world.

The future of social VR

It’s still early days, but there’s lots of scope for these VR experiences to become a natural part of our social lives, and as second-nature as heading to a restaurant or the cinema.

So what do we need now? Companies need to think about their VR experiences as much for how they bring people together as for their raw entertainment value, and continue to innovate, whether that’s by immersing people in a galaxy far, far away or bringing them together to have a discussion after a VR film. And creators and developers shouldn’t see social VR experiences as a novelty; they need to adapt, change and value solid storytelling if they want people to keep coming back for more.

“I think that as an industry we’re already well on our way to further exploring social storytelling and driving these kinds of experiences further,” Bowie says. “The VOID’s platform is a great example of how successful social immersive storytelling can be. As an industry, we just have to keep pushing that quality bar higher, and giving people adventures worth sharing.”

This article is brought to you in association with Honor