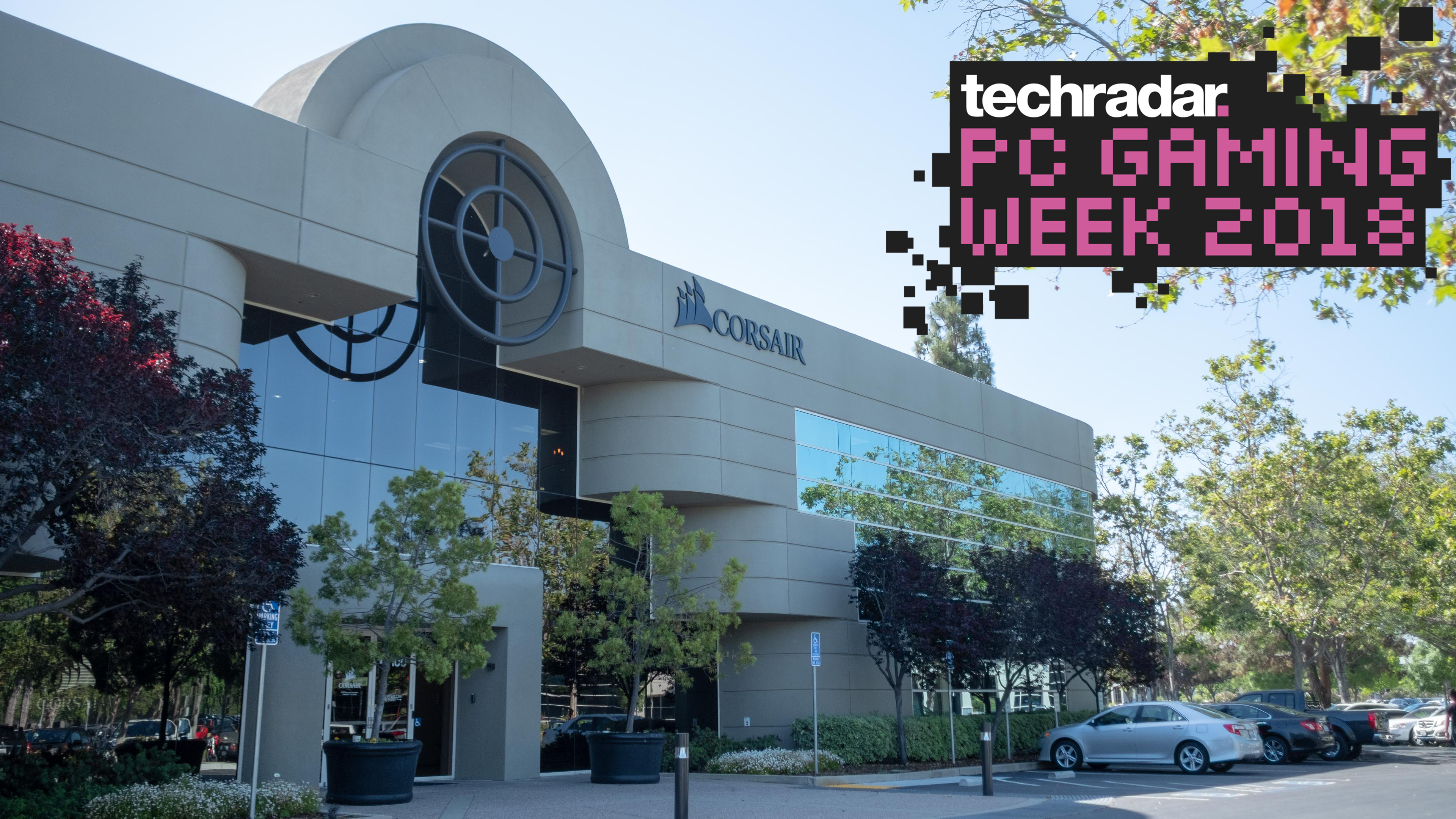 We recently had the unique opportunity to visit Corsair’s main headquarters located just north of Silicon Valley, in Fremont, California. We only expected a corporate building – augmented of course by the fun of PC gaming – but to our amazement inside is a competition-grade gaming room and even some testing areas where the company evaluates its products before release.

Join us as we take you inside Corsair’s hallowed halls where the company comes up with some of the best PC gaming components and peripherals in the industry.

Upon entering, there is the usual reception area, but our attention immediately drifted to the right where Corsair essentially setup a small shop to show off its wares and, of course, sell some swag.

Corsair’s full line of power supplies, fans, sleeved cables, CPU coolers and all its PC parts are on display.

Meanwhile, along another wall you'll find almost every single mouse, headset and keyboard peripheral Corsair has ever produced.

Just outside the store area, Corsair also setup a hydraulic racing chair in front of a decently-sized projector screen.

Amazingly, the whole thing is powered by the compact Corsair One gaming PC.

With a company name like Corsair, we expected a somewhat pirate-themed office. That said, it isn't overtly decorated like a maritime attraction or some sort of theme-restaurant.

The artwork hung around the office is truly inspiring. Sadly, they're not available for purchase.

In case you didn't know, Corsair has a running web comic series it publishes to its Twitter, Facebook and other social media. A running story board caught our eye as we walked around the office, and here's where the sausage is made.

We got to poke our heads into Corsair's video studio, where the company shoots many of it's promotional and how-to videos. On set, we got to take a look at the Corsair Obsidian 500D before its Computex 2018 debut.

Just outside of Corsair's gaming room, you'll find a bunch of cosmic-themed artwork fashioned after the Doctor Who series.

And just like the Tardis, Corsair's gaming room is way bigger on the inside than anything you could have imagined it being.

There is a total of 10 desks with completely custom built gaming rigs and all the PC peripherals your heart could desire. Corsair tells us it regularly hosts esports teams looking for a space to practice. The PC gaming hardware maker also regularly holds company meetings and other cordial events in the same space.

Dotted around the perimeter of Corsair's gaming room, you'll find a bunch of case mods and custom PCs builds. The one on the left features some Empire themed aesthetics that Star Wars fans will recognize, meanwhile the right was a custom liquid-cooling focused build.

The our biggest personal highlight of the custom PC builds is this Zenyatta-themed case mod.

On a less extreme, but still very impressive note, Corsair shows us its latest cube case loaded up with a Micro-ATX system that can support dual graphics card configurations.

Moving onto the evaluation lab, this is where Corsair puts some of its products through testing to make sure they're up to snuff.

Bobby Kinstle, Senior Project Manager at Corsair, calls this first machine a wind tunnel, but it's really designed to measure volumetric flow and differential pressure. That's a bit of a mouthful, but basically in this part of the evaluation lab, Corsair tests its fans to see how well they can push to pull air in.

Kinstle will both test the fans on their own or with a dust filter mesh in front of it as well as if users were to screw it to a liquid-cooling radiator.

Next up, the Thermal Chamber looks a bit like a kiln or oven and that's basically what it is. Corsair mainly uses this device to measure the thermal resistance of its all-in-one liquid coolers to see how long it takes before they heat up.

While this tall gray cabinet might look like a piece of medical equipment, it's actually a power supply tester. Kinstle demonstrated how it works by plugging in the machine's leads into a standard power supply and from there it'll stress test the PSU for hours for any fatal errors.

Of course, there are also plenty of standard test benches where Corsair simply tests how well their power supplies, fans, RAM and liquid-cooled graphics cards work.

Corsair didn't become the master of RGB lighting by chance, here the company is putting its new iCUE software through some rigorous use.

Corsair also recently got into the business of selling its own pre-built systems including its most recent Corsair One Elite. During our visit, the company was giving all of its latest desktops a good benchmarking.

Corsair also puts all of its peripherals through a battery of tests as well as long term usage. On these shelves we found basically every keyboard, mouse and gaming headset the company has on the market.

And that's a wrap, folks. In case you missed it earlier, we also took this Corsair HQ visit opportunity to go deep into the development of their keyboards and mice. Be sure to stick around for even more features as PC Gaming Week 2018 rolls on.