5G and enterprise solutions at Nokia Technology Day in…

The round is officially undisclosed, but TechCrunch understands from a source close to negotiations that it is worth around $4 million. Existing iPrice backers Cento Ventures (formerly known as Digital Media Partners) and Venturra Capital also took part in this round.

iPrice, which has its HQ in Malaysia, Kuala Lumpur, previously raised a $4 million Series A in late 2016. Today’s investment takes the startup to $9.7 million raised overall.

The company was started in 2015 in response to the growing number of e-commerce companies in Southeast Asia, and in particular the increasing number of vertical-specific options. Even though there are some giants, such as Alibaba’s Lazada, the region has a number of smaller players that can struggle for visibility. iPrice was initially a coupon site, before pivoting into an aggregation model which essentially acts as a destination for shoppers to then go on and purchase items from e-commerce retailers.

In a way, it is much like flight booking sites — such as Skyscanner — which ask a customer where they want to go before scouring the web for the best travel deals. iPrice does this for e-commerce in Southeast Asia. It hopes that simplifying things through a single destination portal can make it the go-to online buying site for the region, which now has over 330 million internet users — more than the population of the U.S. — according to a recent report co-authored by Google. 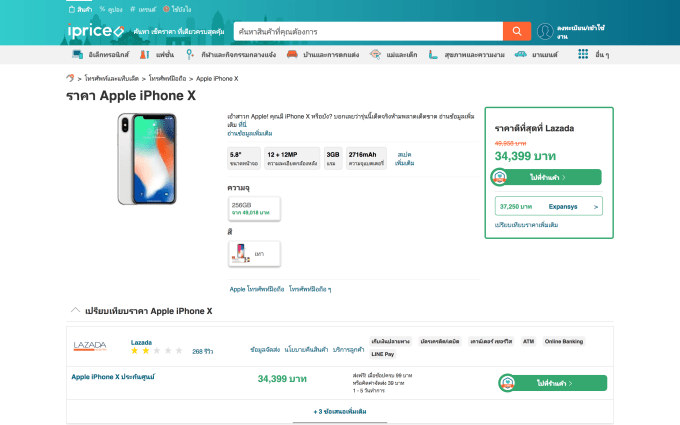 iPrice on the web, although its mobile app and mobile browser version are more used

Today, iPrice claims to offer over 500 million SKUs across Malaysia, Singapore, Indonesia, Philippines, Thailand, Vietnam, and Hong Kong. The company said that over 50 million people visited its site since December 2016, and this year alone it is aiming to grow to 150 million visitors.

The company said electronics has been a particular driver while, outside of working with e-commerce firms to drive business, it has developed a B2B business with media groups and brands, including Mediacorp in Singapore and Samsung in Indonesia, who pay to tailor its service. Last year, it developed an insightful report on the state of e-commerce in Southeast Asia.

The deal makes sense for Line Ventures because of the unique vantage point that iPrice occupies, while it also ties into parent company Line’s desire to go beyond being a messaging app and build out a mobile ecosystem. That’s seen it develop services such as food delivery, ride-hailing, payments and e-commerce, although it has struggled in the latter category. A relationship with iPrice might give it greater insight for future e-commerce ventures in Southeast Asia.

TIME partners with DigitalBridge to expand Business across Asia

ForeVR raises $10M to become the Wii Sports of VR

Twitter Working on Plan to Charge Users to Watch Videos

Nov 2, 2022
iCloud Mail is down for some users as Apple confirms that its email service experiences outage issues, it turns out that you are not alone in this trouble.