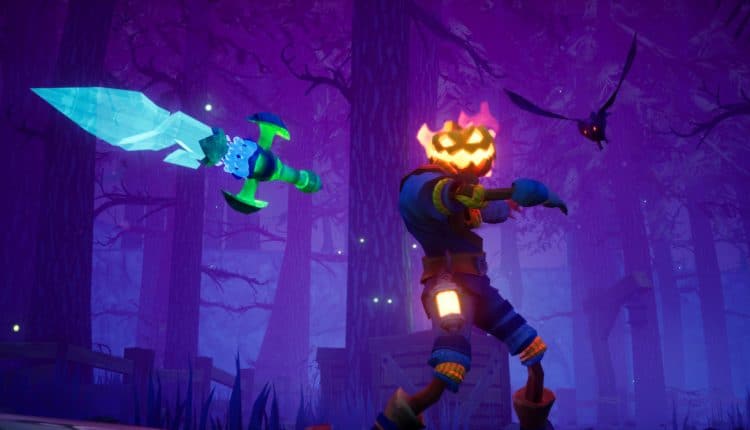 Pumpkin Jack available on Steam as part of PAX Online

The Pumpkin Jack demo is available on Steam as part of PAX Online. It features one level and seems to be a nice vertical slice of what to expect. The world of Pumpkin Jack was so nice and peaceful that the devil got bored and created some chaos. But a wizard is going to stop his fun, so the devil sends Pumpkin Jack, a famous con artist, and trickster, from Hell to the kingdom to stop the wizard. In exchange for his service, he will be set free from Hell.

At least in the demo, the gameplay of Pumpkin Jack is split between two forms. For the majority of the demo, I ran around as Pumpkin Jack himself and used a shovel to attack enemy zombies, rats, and monsters. Jack has a companion, a crow who can be ordered to fly to certain places, breaking barriers or attacking out-of-the-way enemies.

At other times, you play as Jack’s removable pumpkin head. In this form, the gameplay becomes more focused on solving puzzles and exploring smaller areas that are out of reach of the full-bodied Jack. As a pumpkin, you scuttle around like a strange Halloween octopus, knocking over boxes and hitting switches in order to open up new areas of the level. These pumpkin puzzle rooms break up the combat and platforming.

The game’s cartoony visuals and action gameplay immediately reminded me of the recent Medevil remake. The demo takes place in a mostly rural area, with barns, farms, and fields. It all looks lovely, and the upbeat yet still eerie music creates the feeling of walking into a Halloween episode of a Saturday morning cartoon.

According to the official website, Pumpkin Jack is mainly the work of one man, Nicolas Meyssonnier. Considering the quality of this demo, I’m impressed. And as someone who has always wanted more fun and spooky Halloween games, not just horror games, I’m excited to play the full game later this year when it arrives on Xbox One, PS4, Switch, and PC.
Tags: PS2, Action
ActioncolorfulGameGaming newsHalloween
Share