Nintendo has surged ahead of King (June’s leader, now in third place) as well as Warner Bros. Games to take the lead with over a quarter, or 438.6 million, of the industry’s impressions.

GamesBeat has partnered with iSpot.tv, the real-time TV ad measurement company with attention and conversion analytics from more than eight million smart TVs, to bring you a monthly report on the TV ad impressions generated by the gaming industry’s biggest campaigns. These are the ads, and by extension the games, that game makers are putting major muscle behind. 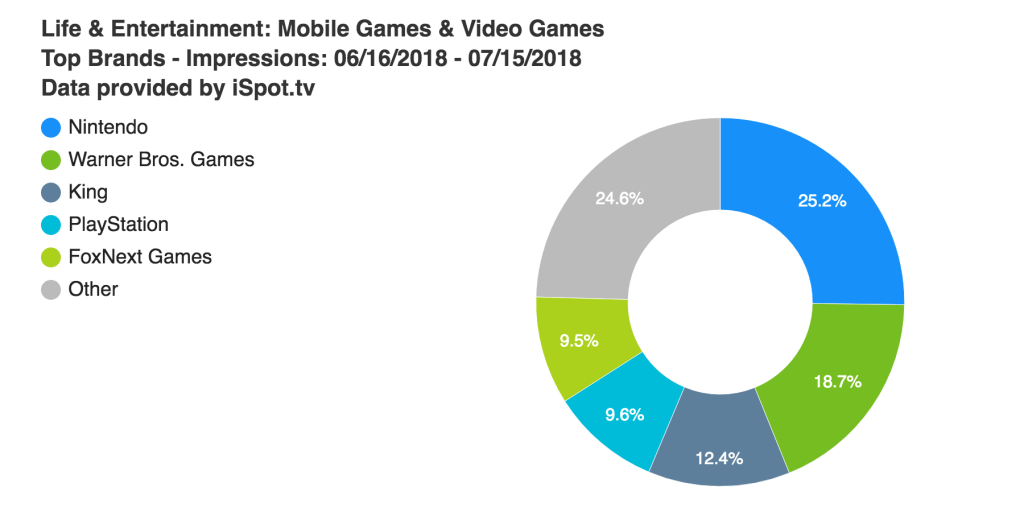 Below are the top five most-seen gaming industry TV advertisers from June 16 through July 15.

In total, there were over 1.9 billion TV ad impressions generated by gaming commercials, with 29 brands spending an estimated $21.8 million on 61 spots that aired over 12,200 times.

Nintendo is in the lead now over King thanks to 15 commercials that aired over 3,700 times. Its most-seen spot (for the Switch) was “Mario Tennis Aces: Swing Into Action,” with 107.9 million impressions. As usual, the company focused on reaching a family-friendly audience, with high impressions across networks including Cartoon Network, Disney Channel, and Nick, and during shows such as Teen Titans Go!, The Amazing World of Gumball, and SpongeBob SquarePants.

Warner Bros. Games, which was absent from the ranking last time, takes second place with 357.4 million impressions generated by four commercials that ran over 1,400 times. A Disney Channel-specific promotion for the Lego Pixar The Incredibles video game was its most-viewed spot, with 172.9 million impressions. Like Nintendo, Warner targeted a young audience, with high impression numbers across Nick and Cartoon Network in addition to Disney Channel, and during shows including Bunk’d, SpongeBob SquarePants, and The Loud House.

At No. 3: King, with 238.4 million TV ad impressions generated by just two commercials, both for Candy Crush, that ran over 1,500 times. The overwhelming majority of impressions (nearly 237 million) came from “Candy Crush Saga: Raining Rewards.” Among the networks generating the most impressions for King were CBS, ABC, and Investigation Discovery, while top programs included Forensic Files, The View, and CBS This Morning.

Absent from last month’s chart, FoxNext Games snags fifth place with a single ad, “Assemble Your Squad,” that aired 1,205 times and generated 182.8 million impressions. Some of the networks that generated the most impressions for FoxNext were FX, Velocity, and Fox, while top programming included Major League Baseball, American Pickers, and South Park.

How to Connect an Xbox Controller to an Xbox

Nintendo offering try out Splatoon 3 before its release