Ashen is a single-player action-RPG masquerading as a multiplayer game, or maybe it’s the other way around? It’s blurry, like the line between players and nonplayer characters. In Ashen, the players are the NPCs.

New Zealand-based developer Aurora44 wants to make multiplayer games that aren’t obtrusive. The kind of passive multiplayer thatgamecompany popularized with Journey in 2012 is a touchstone, where players can forge fleeting alliances in the gaps left by the absence of text and voice chat.

It starts at a technical level. Multiplayer just happens, and players don’t need to do anything.

“We don’t want the technical requirements of connecting to people and figuring that all out,” says studio director Derek Bradley. “We don’t want that to get in the way of the player experience; we want them to be get as close to the world as possible, and one of the ways we do that is by making the act of matching up with people completely seamless and consistent with the world.”

This seamlessness and consistency extends to when you actually meet another player. Instead of seeing an invader from another world — another hero who makes you question if you are, in fact, the One True Protagonist — you’ll just see an NPC. Specifically, you’ll see the NPC whose quest you’re on.

“We wanted to make that connection between the town, the NPCs, and the quests much more meaningful,” Bradley says. “So when you’re on his quest, he’s helping you complete the quest.” 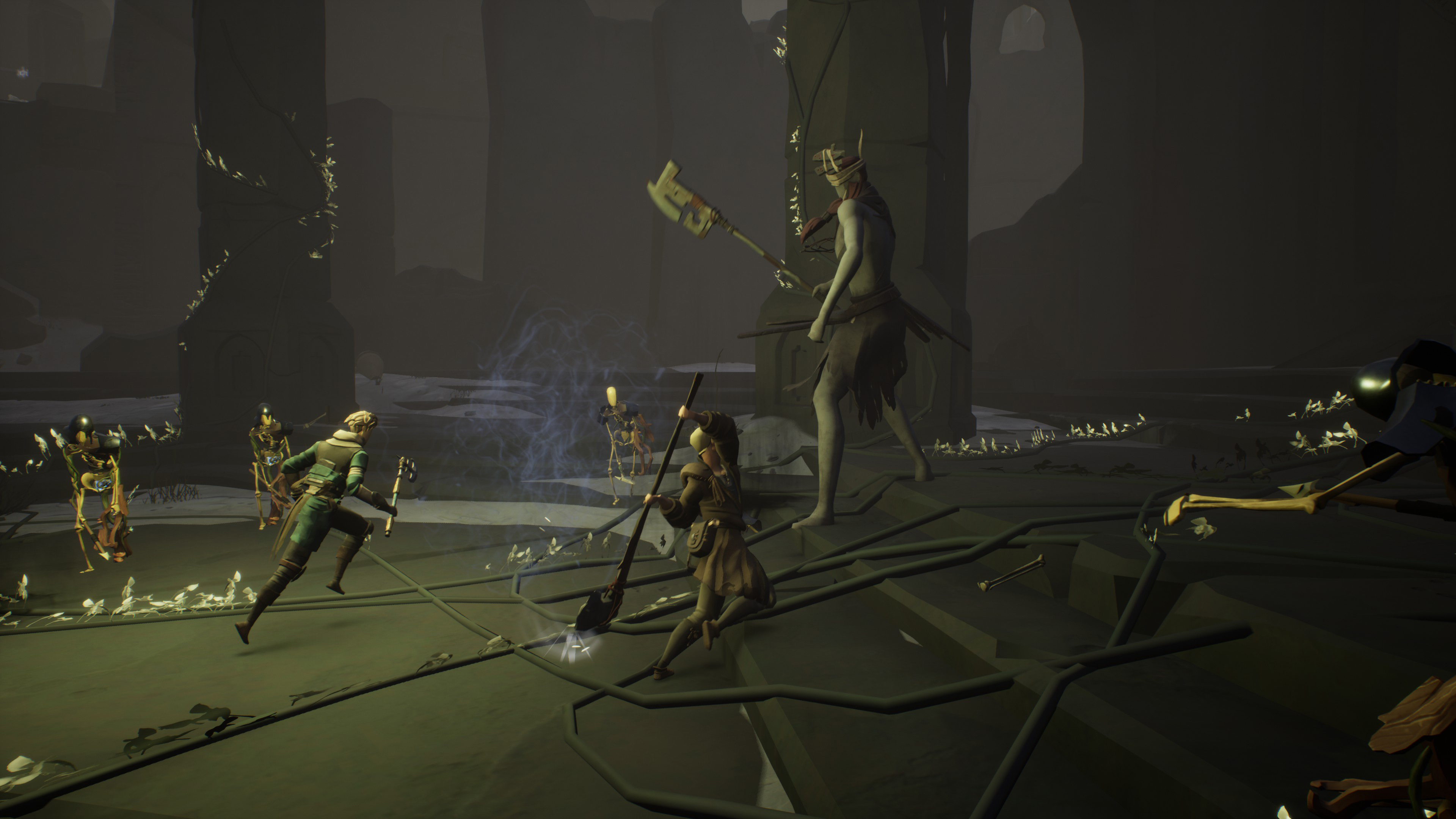 Early in your adventure, you’ll have to clear out a plot of land and chase off monsters, which will become the foundations for a town. Eventually, townsfolk will appear and build their homes and businesses. This area is entirely single-player, and here all the game controls all of the NPCs. All the RPG mainstays are available, such as shops, crafting, and quests. When you accept a quest and head out into the open-world, your version of that world will dock with another player’s, enabling you to temporarily share realities even though you only ever see your own world.

For you, that player will be the quest-giver NPC. For them, you’ll be a different NPC, on a different quest. Since neither of you can talk or type, Ashen can maintain this illusion.

“We don’t want players to break character. The thing that was most important to us was showing where you want to go. You can show other players where your quest goal is, your little avatar will point towards it, and you can also ping the map to show where you are, calling players over. We wanted to really boil it down to things an NPC would do, really.”

It’s a game of quiet, subtle actions: pointing, helping a friend climb onto a ledge, spotting when your ally needs a breather during a fight, and stepping in to defend them. You have little room to troll or bully, and it’s in everyone’s interests to play along. Unless you’re in an offline, solo game, where perks can be used to lift some co-op restrictions, you’ll need help to get into dungeons and just traverse the environment.

When players need to wait for their partner and use teamwork to reach new areas, they likely won’t run off, split up the party, and get into a fight they can’t handle. And since you have no way to call out or even type “help,” staying close together becomes even more of a necessity.

“Repeating the traversal stuff throughout the experience keeps reaffirming that other players are here to help you, that they’re your friends, and they’re here to join you on your quest,” Bradley says. “If we did it so you could always get around solo, we’d get players climbing up and running off and losing each other. Gating players behind these two-player climbs, where you’re getting up at the same time, pulls the player back to the core experience.” 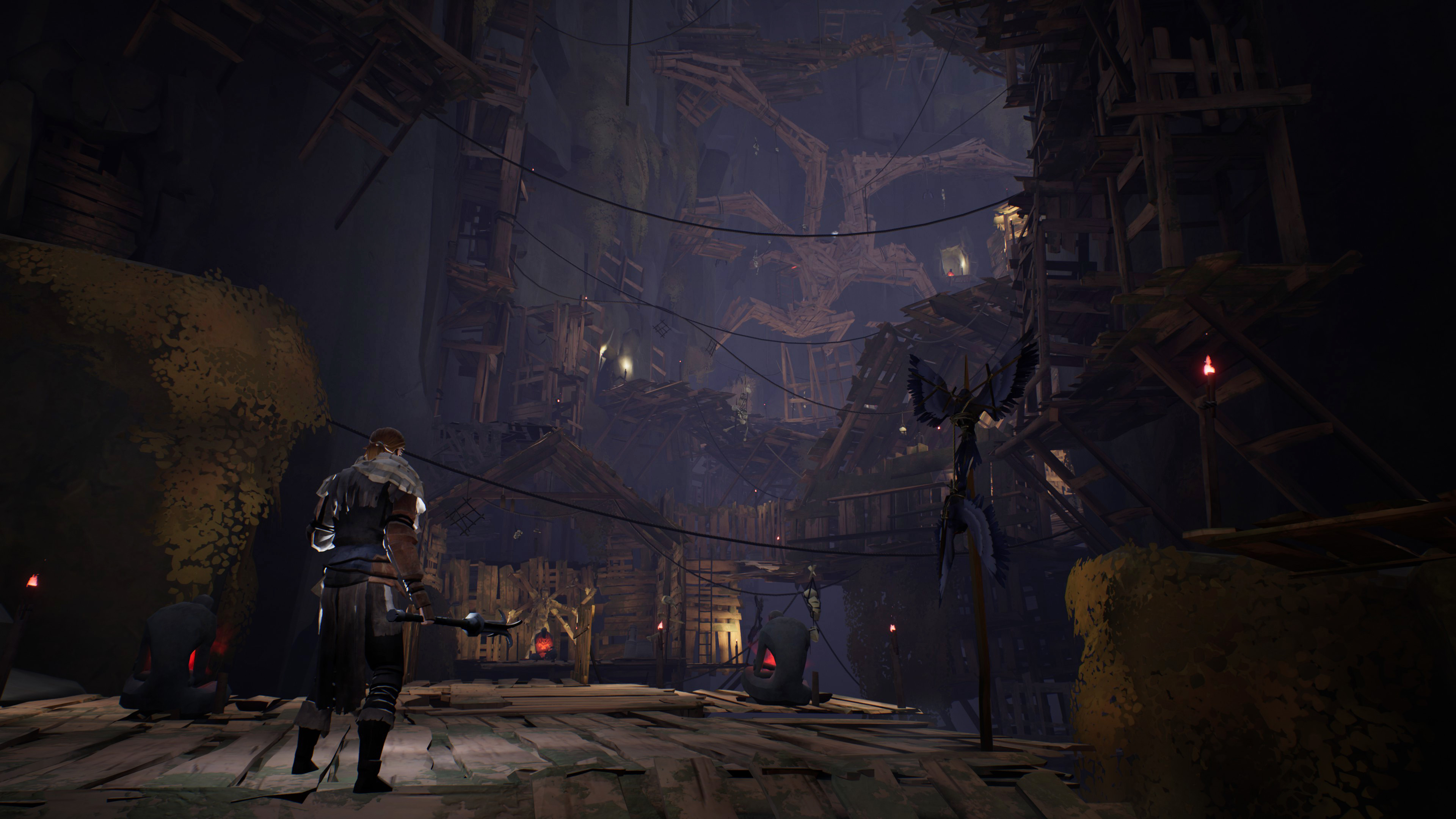 Ships in the night

Almost everyone who has spent a bit of time in multiplayer worlds has a story about meeting a helpful stranger who walks them through this new and intimidating game, passing on knowledge that can then be passed on in turn. Ashen takes those warm moments and attempts to build an entire game around them.

“There’s a Japanese concept [Ichi-go ichi-e] that means ‘only now and never again’; fleeting moments are interesting in and of themselves because it’s something you might never see again,” Bradley explains. “You might never meet that player again, or know if you’ve met them again. And when you meet an NPC, they’ve not just been waiting around for some trigger to come over and talk to you. That person can do whatever they want in the moment, and I guess there’s some magic in that, too.”

A novel approach to multiplayer hasn’t stopped Ashen from receiving familiar comparisons. “People look at it and think it’s a Souls-like game, just because it has stamina-based combat,” Bradley says. It’s a flattering comparison, especially for a 40-person studio that was, not all that long ago, just three people in an office in the New Zealand countryside. Labeling it a Souls-like isn’t accurate. Ashen isn’t about devilish difficulty and frequent deaths, and the system is more concerned with creating situations where an ally can help out. When you’re out of stamina, that’s absolutely the time you want your silent friend to leap in with sword and shield.

“Even Dark Souls itself gets reduced to these one or two elements. It’s way more than just difficulty and stamina-based combat. It’s the same with Ashen. If we just get compared to a Souls-like game, it might mean that players will expect a gruelling, Dark Souls experience, but that’s not what we’re going for. It’s partly why we’ve chosen this art style: it’s more inviting, and it’s more stylised. It hints that the game is a different thing, and I think players can appreciate that when they get into the passive multiplayer and get a feel for the game.”

Ashen and its passive multiplayer don’t have a release date yet, but it will arrive on Xbox and PC this year.

Sponsored posts are content that has been produced by a company that is either paying for the post or has a business relationship with VentureBeat, and they’re always clearly marked. The content of news stories produced by our editorial team is never influenced by advertisers or sponsors in any way. For more information, contact sales@venturebeat.com.