Injecting cloud storage with artificial intelligence is easier said than done. Even something as simple as optical character recognition can take ages to get up and running, and businesses more often than not end up juggling multiple service providers — each with their own ecosystem, toolset, and idiosyncrasies — to meet the needs of employees and customers.

Box aimed to change all that with Box Skills, a suite of apps that add new features and functionality to cloud-hosted files. A few launched last year as part of a private beta program, including an image-processing Skill that uses Google’s Cloud Image API. Today, ahead of its BoxWorks developer summit in San Francisco, Box unveiled a slew of additions to the library from IBM and Microsoft.

It also announced that the Box Skills beta will expand to more customers in July. (Signups begin today.) Skills remain free for now, but in the future the company plans to charge customers a monthly fee.

“We want what customers put in Box to have infinitely more value in Box than outside of Box,” Jeetu Patel, chief product officer at Box, told VentureBeat in a phone interview. “When you make available all the advancements that are being made in machine learning, the intelligence that gets added to files improves how people make decisions around content.” 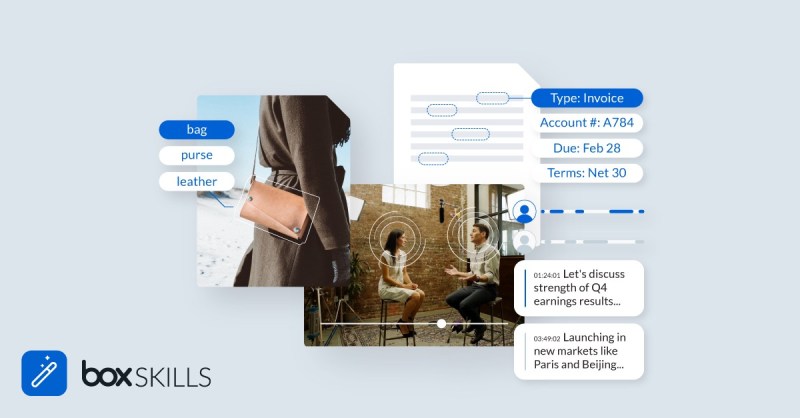 Above: A graphic illustrating Box Skills.

Watson Visual Recognition uses custom algorithmic models to deliver insights — a marketing team might use it to tag images in the course of digital asset management, Patel suggested. And Watson Natural Language Understanding, IBM’s other Box Skills offering, automatically tags documents in Box with relevant keywords and concepts, making them easier to find.

“It can search through a corpus of millions of images,” Patel said. “You can ask it, for example, to show every image that has a green background.”

Microsoft’s contributions to the Box Skills ecosystem are powered by Azure Cognitive Services, a cloud AI platform announced at the company’s annual Build developer conference in May.

Along with Computer Vision is Azure voice synthesis, which includes a customizable speech services engine that allows businesses to add custom dictionaries of “industry-specific” terms. Any audio-based Box Skill will be able to leverage Azure for speech, and Patel said that some of Box’s customers are already using it to perform sentiment analysis on audio recordings.

Flipping on skills is nearly a one-tap process. Administrators pick the folder to which they’d like to apply a Box Skill, fiddle with the corresponding settings in the administrator console, and confirm their choices. All users with access to the folder see the Skill right away, automatically.

Box Skills are secure, Patel stressed. They exchange data in a “severless” fashion. Files are sent off to be processed by a third party, deleted, and sent back as a JSON object — and Box doesn’t allow Box Skills providers to train machine learning models on customer data.

Box customers willing to step out of the walled garden can take advantage of the Box Skills Kit, a set of APIs, developer tools, and documentation for building Custom Box Skills on the back of platforms like Amazon Web Services, Google Cloud, or Microsoft Azure. The sky’s the limit with Custom Box Skills, which can leverage any third-party machine learning platform for training or chain multiple skills together.