After months of PlayStation leading the chart, King is now in first place.

GamesBeat has partnered with iSpot.tv, the real-time TV ad measurement company with attention and conversion analytics from more than eight million smart TVs, to bring you a monthly report on the TV ad impressions generated by the gaming industry’s biggest campaigns. These are the ads, and by extension the games, that game makers are putting major muscle behind. 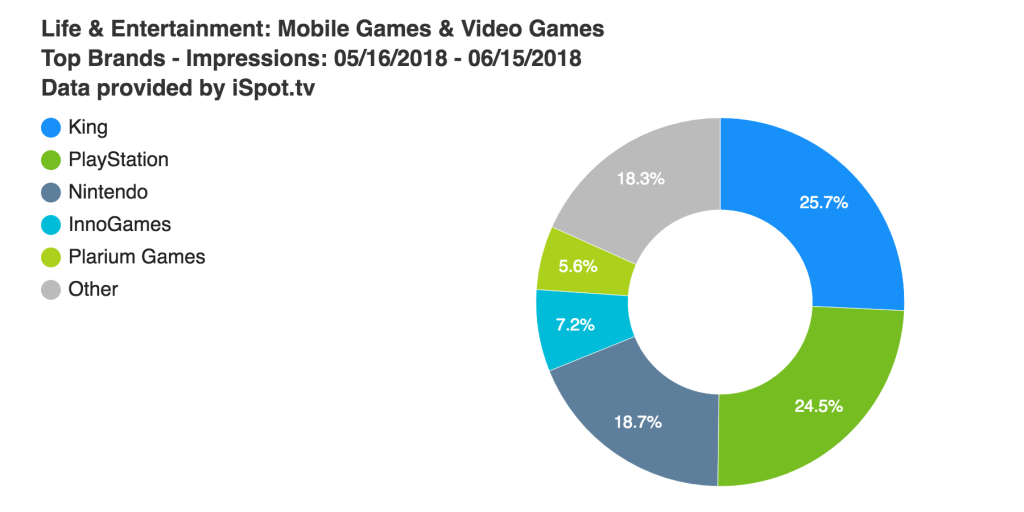 Below are the top five most-seen gaming industry TV advertisers from May 16 through June 15.

King takes over as the gaming company with the most-seen ads, generating over 513.6 million impressions from its six ads that aired 3,100 times. All of its commercials were for Candy Crush, with “It’s Party Time! Get That Sweet Feeling!” having the most impressions (183.7 million). Among the networks generating the highest number of impressions for King were CBS, ABC, and ION, while top programs included Forensic Files, The View, and NCIS: Los Angeles.

In third place is Nintendo with 18 spots that aired over 3,300 times, racking up 373 million impressions. The spot with the most impressions (133.3 million) was “Best Summer Getaway,” advertising the 2DS XL. The brand reached a family-friendly audience, with high impressions across networks such as Cartoon Network, Disney Channel, and Nick, and during shows including SpongeBob SquarePants, Teen Titans Go!, and The Amazing World of Gumball.

InnoGames comes in at No. 4 on the chart with 143.3 million impressions from four ads that ran 979 times, with “Develop Your City” as the most-seen with 86.7 million impressions. Some of the networks that generated the most impressions for InnoGames were Fox News, Syfy, and History Channel, while top programming included American Pickers, America’s News Headquarters, and Special Report With Bret Baier.

Plarium Games rounds out the ranking with 112 million impressions generated by four spots that aired over 2,300 times. The brand’s spot with the most impressions (76.9 million) was “Truth or Tale” for Vikings: War of Clans. Velocity, Viceland, and Paramount Network were three of the networks that racked up the most impressions for Plarium, while specific programs that generated high impressions included Bar Rescue, Bitchin’ Rides, and SportsCenter.