U.S. cybersecurity jobs grew 3.5 percent in the past year, while job searches for cybersecurity roles increased 5.7 percent, according to a new report by job posting site Indeed.

Indeed knows that if you’ve tuned into the news lately, you’re aware cybersecurity is a huge issue. From breaches of privacy to election controversies, it can impact pretty much everybody. In just one incident in 2017, 143 million Americans were directly hit when an Equifax data breach exposed their sensitive personal information.

The recent implementation of the European Union’s General Data Protection Regulation (GDPR), which gives individuals more power over how their data is used, only increases the stakes. Failure to comply with the GDPR can result in fines equivalent to around $27 million or 4 percent of global annual revenues, whichever is higher.

Recently, Indeed looked at the above-mentioned growth in both supply and demand for jobs related to cybersecurity — between March 2017 and March 2018 — based on a study of each metropolitan area’s percentage of postings and clicks, as well as location shares of IT security job postings over the past year. 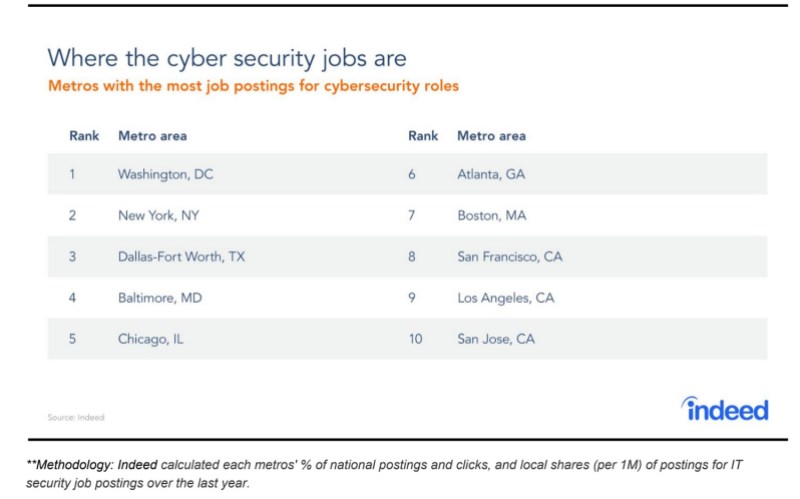 Above: Where the cybersecurity jobs are.

As the table shows, no one geographic region is dominant. The cities with the most cybersecurity jobs represent the East Coast and West Coast, as well as the Midwest and South. The cities that appear on both charts here are Washington DC, Baltimore, Boston, San Francisco, and San Jose.

Coming in at No. 1 for the most jobs is Washington D.C., where many cybersecurity professionals are protecting data for the federal government, the defense industry, and other large nonprofits and non-governmental organizations. D.C.  was also No. 2 on Indeed’s top tech hubs list. The city with the second most job postings in cybersecurity is New York, the financial capital of the U.S. 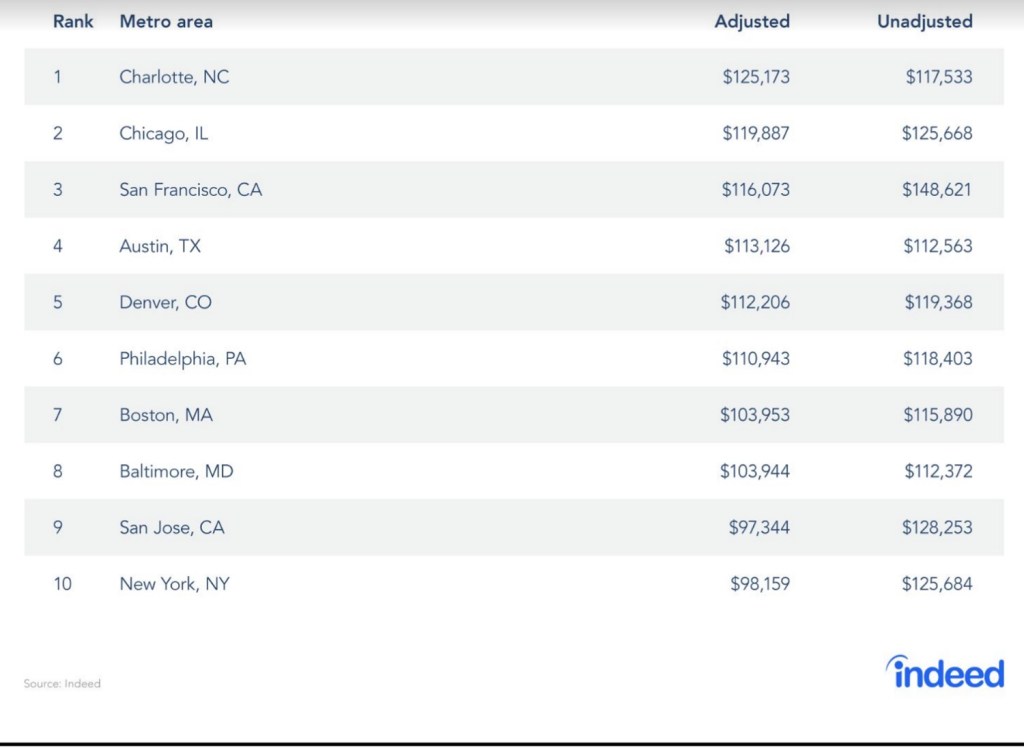 Above: The regions that pay the most for cybersecurity jobs.

Dallas-Fort Worth, Baltimore, and Chicago round out the rest of the top five — cities that may not typically be associated with tech in the popular imagination. But the need for cybersecurity professionals applies to all industries, and the Dallas-Fort Worth metro area is home to no fewer than 22 companies on the 2018 Fortune 500 list, including AT&T, American Airlines, and Exxon Mobil. Dallas and Fort Worth both made the list of fastest-growing cities between 2016 and 2017, coming in at No. 3 and No. 4, respectively. Baltimore, which places fifth for the most cybersecurity jobs, also made the Indeed top tech hubs list, coming in at No. 3.

Cybersecurity professionals with the right skills are in high demand, and these jobs typically pay well — but high salaries can be deceptive, unless adjusted for the cost of living, Indeed said.

When you look at unadjusted salary, San Francisco places highest, at $148,621. But because the cost of living in San Francisco is so high, money doesn’t go as far to cover costs like rent, groceries, and transportation.

Once adjusted, the picture is very different: This year’s best paid city for information security specialists is Charlotte, North Carolina, with an average adjusted salary of $125,173 per year. With a population of just under a million, Charlotte is the headquarters for a number of companies, including Bank of America and LendingTree.