LinkedIn will finally allow you to translate other users’ posts into your own language, the company announced today.

LinkedIn will display a “See Translation” option after taking into account various signals, such as your own default language setting and current country. If it detects another language in a post in your feed, it will offer to translate the text. 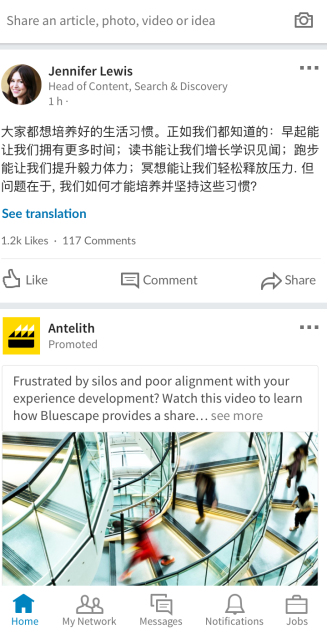 As you’d perhaps expect, given Microsoft’s decision to pay $26 billion for LinkedIn, the translations are powered by Microsoft Text Analytics API — the same smarts that provide translations for other Microsoft services, including Office, Skype, and Bing.

“Since Microsoft is continually improving translation quality, you can expect translations to get better and better over time,” said LinkedIn senior product manager Zack Hendlin.

Other social networks, including Facebook and Twitter, have offered similar translation features for years, so LinkedIn’s decision to join the fray has perhaps been a long time coming. Hendlin did add that this was one of LinkedIn’s most-requested features.

The See Translation feature will work across 60 tongues, including Spanish, French, German, Chinese, Korean, and Japanese. And if we’re working from the list of languages supported by Microsoft Translator, it should also work with Star Trek‘s Klingon.

For now, the translation feature is limited to LinkedIn on the desktop and mobile web, though it will be landing in its native mobile apps “in the next few weeks,” according to Hendlin.