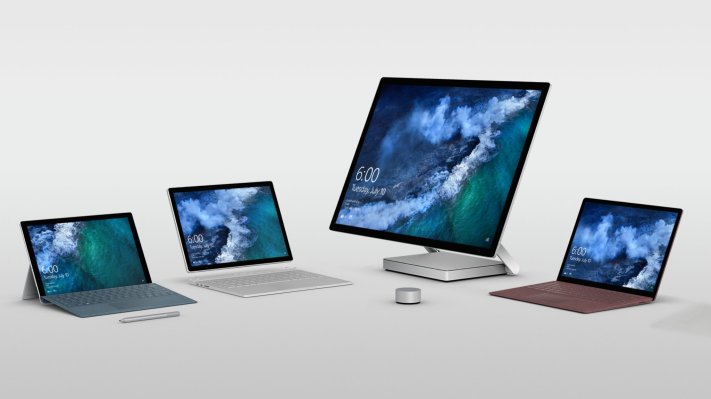 Microsoft all but announced as much via the official Surface account. The company tweeted out the leading question “Where will Surface go next?” along with a image of the full lineup — the Pro, Laptop, Book 2 and swiveling all-in-one Studio.

The desktops each displaying 6:00 on Tuesday, July 10 is the other key hint here. The big news will probably drop tomorrow, most likely in the A.M. So, what’s on deck for the Surface line? Given that all of the key players are present and accounted for here, an entirely new entry seems like a pretty reasonable guess.

The rumors of a new, low-end device have been making the rounds for a few months now. Back in May, talk surfaced (?) of a new, low-cost entry, aimed at competing more directly with the iPad. That certainly makes sense from a Portfolio standpoint. Other rumors include the loss of the proprietary Surface connector, in favor of USB-C and “rounded edges.”

The Surface line has long been focused on creative professionals, which has made most of the entries a bit too steep for casual tablet usage. That Apple has offered up an even cheaper version of the iPad in the wake of a stagnating tablet market, has likely lit even more of a fire under Microsoft.

More info on that front has been popping up over the last couple of weeks, including a supposed spec sheet and a launch date of this Friday, coupled with a recent appearance at the FCC.