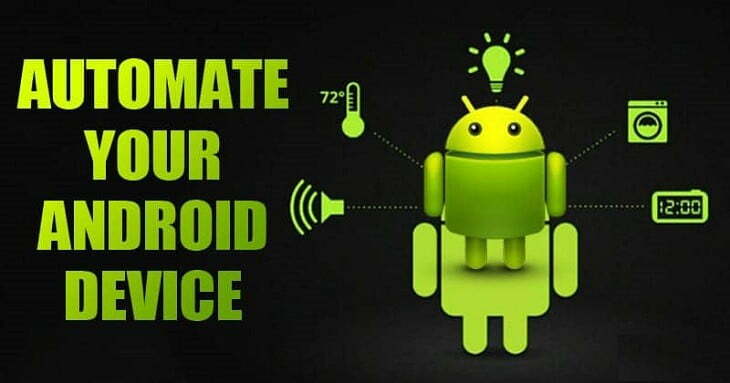 In this article, we have decided to share a list of best Android apps that could help you to automate different tasks. These apps provide shortcuts, configurations, triggers, and rules that can help you get more out of your Android smartphone.

Before exploring the list, please keep in mind that most of the apps listed on the article work on non-rooted devices, but if you have a rooted device, then you can explore some of the hidden features. So, let’s explore the list of best Android apps to automate tasks.

Well, SkipLock is made for those who are tired of entering the password manually all the time. The Android app works on both rooted and non-rooted device, and it lets you skip past the lock screen when you are connected to a designated WiFi or Bluetooth device. So, once the app detects the WiFi, it automatically unlocks the lock screen of your Android device.

If you are using an Android smartphone for a while, then you might know that the operating system slows down over time. This happens because most of the app data is cached on your internal memory to ensure better load speed. However, in the long run, it affects the performance of the device. So, with the Cleaner Android app, you can set a schedule to clean your cache automatically. On the settings, there’s an option to set when Cleaner can clean up your cache, from every 1 hour to every seven days.

Well, this is another best Android app that you can use to automate the screen brightness level. Guess what? The Velis Auto Brightness automatically adjusts your device’s brightness settings based on the light sensitivity. Yes, you can also customize the brightness level as per your wish.

Tasker is by far the best and most advanced Android automation app available on the Google Play Store. With root access, Tasker can control the software, hardware, and different aspects of Android. What’s more interesting is that Tasker allows users to create triggers to launch certain apps, widgets, and other features automatically. Right now, Tasker has over 200 plugins to do different tasks.

This app is not much popular, but it’s one of the best Android automation apps that you can use today. The best thing about Automagic Automation is that it provides users a wide range of features and actions to create flow charts. Basically, you need to create flow charts to do different actions like starting any app, closing any app, changing the settings as per the GPS coordinates, etc.

It is one of the best and most popular automation apps that you can use on your Android smartphone. With AutomateIt, you can easily create rules to perform different tasks like sending SMS as soon as you reach certain GPS locations, launching the app when you are connected to any specific WiFi, etc. So, AutomateIt is another best Android automation app that you can use right now.

Well, MacroDroid is another great option in the list which you can consider to automate tasks on Android. On MacroDroid, you need to create custom macros to perform certain actions. You can also choose from hundreds of built-in macros as well. The app works on both rooted and non-rooted device, and it’s definitely the best Android automation app that you can use right now.

As the name of the app says, the Automate Android app allows users to automate various tasks on Android smartphones or tablets. Just like every other Android automation app, Automate also allows users to create a flowchart to perform different tasks. For instance, you can create your automation to change settings like audio volume, Bluetooth, GPS, WiFi, sending SMS, etc.

It’s a relatively new Android automation app on the list which you can consider. The app is not much popular, but it got a wide range of options for automation. To use this app, you need to create triggers, set tasks, and select the options. That’s it! The app will perform everything that you have set.

Well, RuleBot: Automation is one of the best Android automation app available on the Google Play Store. It provides users a time-based, event-driven task scheduler, and automation manager. You won’t believe it, but the app has over 30+ events, 30+ conditions, 40+ actions, and 10+ predefined sample rules to automate your workflows.

Power Automate from Microsoft is another best Android automation app that you can use right now. Unlike all other apps, Power Automate is meant to assist your business workflows. For instance, you can set the app to alert you when you receive an email from any particular contacts, you can choose to record your work hours, etc.

So, these are the ten best Android automation apps that you can use right now. If you know any other such apps, let us know in the comment box below.