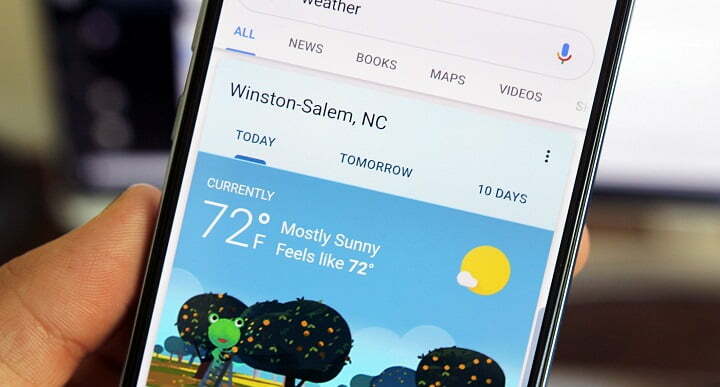 If you regularly use Google Weather app on Android, you might have noticed that the app hasn’t received any major design updates for years. In fact, the app has always used elements from the original 2014 Material Design. Well, it is now finally getting a design overhaul.

Google is rolling out a new update to its Weather experience on Android. The latest update doesn’t change the core functionality but brings the app in line with the new Google Material Theme. The app is still leveraging weather.com for data though.

After the latest redesign, the search bar at the top now has rounded corners. The Today, Tomorrow, and 10 days tabs below the search bar also get a design overhaul. The non-active tabs are also now more prominent.

The navigation drawer on the left has been removed and replaced by your profile avatar on the opposite end of the search bar. You might remember that the Google Play Store underwent a similar change last month. Much like the Play Store, tapping on the profile avatar reveals a dropdown menu that contains all the settings. If you have multiple Google accounts logged in, you can access other accounts by tapping the Expand icon beside your currently active account.

Below your accounts are the settings to change Temperature units and an “Add to homescreen” shortcut. So it’s pretty much the same core stuff but in a new aesthetic that blends better with other modern elements.

The latest design update for Google’s Weather app on Android brings one odd change though. The status bar now isn’t themed to the current weather condition, neither does it follow the system-wide dark themes. Instead, it’s a stark white bar similar to the search bar just below it. The dropdown menu under the profile avatar still follows the system themes. So it’s an odd choice by Google to keep the status bar white. It is a bit too bright for the liking, especially if you use your phone in dark mode. Hopefully, the company will fix this with a new update later on.

This design overhaul for the Google Weather app on Android is currently rolling out with Google app version 12.20 in the beta channel. Launching weather from the Pixel Launch’s At a Glance widget as well as through the search results page also loads the new design. It should roll out on the stable channel in the coming weeks.

There are also reportedly some bugs on the current version. Tapping the search bar to switch cities doesn’t properly load your saved locations. Google will likely fix these issues before publicly rolling out the new Weather experience on Android.