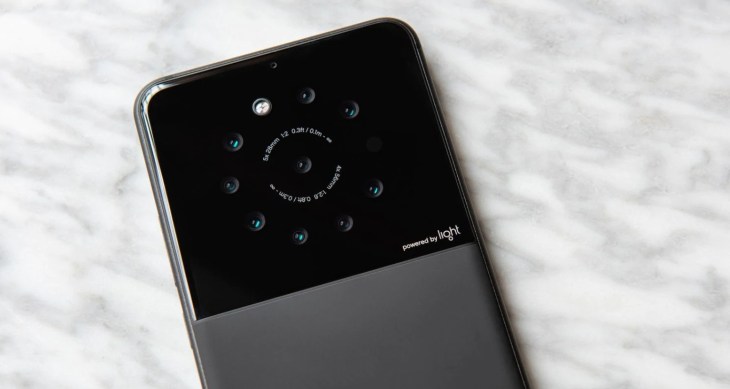 Camera technology company Light is the latest to do the money dance with SoftBank’s massive Vision Fund after it raised a $121 million Series D round.

The funding round was led by Vision Fund, the near-$100 billion fund anchored by SoftBank, with participation from consumer camera giant Leica Camera AG. Today’s announcement takes Light to around $186 million raised from investors to date.

Light is best known for its futuristic camera technology and shooters. The company first introduced the $1,950 L16 camera back in 2015, which then began shipping in 2017. The camera uses 16 lenses to capture 52 megapixel imagery which produces impressive results. Perhaps most notably, the L16 is tiny which makes it hugely portable and convenient.

Given the small form factor and the rise of mobile photography, it was with little surprise that earlier this month Light teased its first smartphone camera product. Exact details of what that product will finally look like are unclear, but a Light representative told TechCrunch that its mobile technology has been licensed to an OEM which plans to launch a Light-powered smartphone this coming September.

“In this era, pocketable, connected cameras can reconstruct the world in three dimensions and superhuman detail, cars are able to perceive the objects around them without the need for special sensors, and robots are able to thread the elusive needle autonomously,” Light said in a statement.

In addition, the company claims the smartphone tech, which supports up to nine cameras on the rear side of the phone, will “shatter the expectations of mobile photography” when it is released.

A representative said also that Leica and Light’s partnership may see the duo develop consumer products that utlize Light’s tech, although details of that are even less clear than the smartphone plan at this point.

That foray into mobile underscores the plans for this new round of funding for Light. The company said it intends to push its technology, which to date has been utilized in the consumer space, into security, robotic, automotive, aerial and industrial imaging verticals.

You can imagine that this ambition to expand fed nicely into SoftBank’s pitch for Vision Fund, which is designed to bring together the world’s top technology companies and encourage synergies between them. With ARM and Nvidia among the chipset firms backed by the fund, Light will see plenty of opportunities to knock on new doors and explore growth opportunities as part of the collective.

Here’s an interview with Light Dave Grannan, who showed off the L16 at CES 2016:

Jul 5, 2021
Microsoft urging Azure users to update the PowerShell command-line tool as soon as possible to protect against a critical remote code execution.