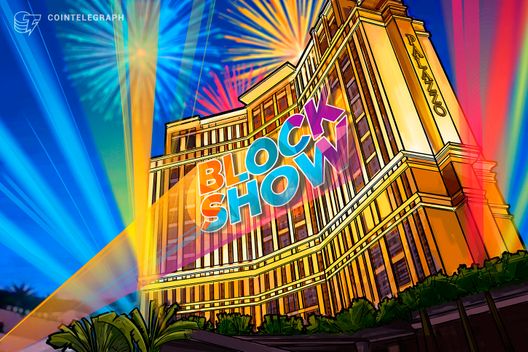 Blockshow, a major international blockchain event powered by Cointelegraph, announced the new conference Blockshow Americas 2018, which will be held in Las Vegas August 20-21, 2018. The event comes on the heels of the successful Blockshow Europe 2018 in Germany in May 2018.  According to the Blockshow team, the upcoming conference will be focused on the crucial questions that affect the blockchain community — governmental initiatives, insights from central banks, and the evolution of law and regulations.

Blockshow Americas will be held on the premises of the Venetian, one of the most famous hotels in Las Vegas. More than 80 international speakers — from fintech, blockchain and cryptocurrency — are expected at the event. The list of speakers include Alex Mashinsky, founder of the Celsius Network, a serial entrepreneur and venture investor; Mike Butcher, editor at large at TechCrunch — awarded the Most Excellent Order of the British Empire (MBE) in 2016; Nouriel Roubini, the founder and chairman of Roubini Global Economics; David Schwartz, CTO at Ripple; Johanna Maska, CEO of Global Situation Room and former White House Director of Press Advance (for President Barack Obama); and other well-known personalities.

Blockshow Americas 2018 is planned to be a platform for companies in the blockchain and allied space to show off their latest and greatest products, releases and projects. The companies will feature their important developments in different sectors, such as voting and elections, e-commerce, and supply chains.

One of the highlights for the participants will be the Blockshow Oscar, a startup competition for young and innovative blockchain companies. In the previous editions of the contest, six companies were awarded almost $90,000 in total. A previous Blockshow Oscar winner has reportedly reached a full hard cap of $30 million and the previous participants have raised more than a combined total of $500 million.

Bringing the blockchain world together

The previous Blockshow conferences had become the venue for over 7,000 private meetings and over 170 exhibitors, with more than 1000 startups presented. There have been over 1,000 media publications about Blockshow. Describing how the conference has been able to bring people together, Rachel Wolfson — a Forbes journalist — said:

“l’m really impressed with the European crypto conference scene. This conference brought a lot of people together. Coming from San Francisco, it is really refreshing to see. It is exciting.”

Bobby Lee, co-founder of BTCC and board member of the Bitcoin Foundation, told Cointelegraph about his previous experience at Blockshow,

“I really enjoyed Blockshow Europe. It was great to see a lot of enthusiasm from the attendees and the organizers did a wonderful job. It was very professionally done and everything was on schedule. I think conferences are important to get the word out there, to educate people and help them learn about cryptocurrency and blockchain. This is how we get on-board the next billion people.”

More than 100 organizations and companies — such as Achain, Changelly, iExec and Iconiq Lab — provided support for the Blockshow event in Europe. BuzzFeed quoted Addy Creeze, CEO of Blockshow as saying,

“Among conferences, Blockshow is like the Cirque du Soleil of the circus — we stand out from the competitors. We are not your typical conference: We remove standard, official stuff from it and focus on a casual atmosphere where community feels like home and where people can network and sign contracts. We disregard the word ‘official,’ and like to replace it with ‘informal.’ We are a show for blockchain business representatives to spend their time efficiently.”

Registration for Blockshow Americas 2018 is already open on the website. There is a special offer which allows to save on ticket purchase.