During this year’s PC Gaming Week, we had the chance to hop over to the US office of one of the companies behind some of our favorite PC gaming accessories: SteelSeries.

Walk around Chicago’s West Loop, where the scent of freshly made chocolate frequently fills the air, not a twenty minute stroll from the Sears Tower (yes, the one some now call Willis Tower) or the Union Station, and you might never notice you’ve passed the SteelSeries office. 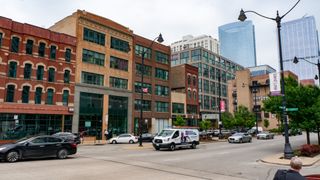 Even from just across the street, it’s hard to tell that you’re looking at the offices where SteelSeries is figuring out how to make the next best gaming mouse, keyboard, headset, or something entirely new.

Inside, the story changes quickly. The US SteelSeries offices occupy two floors of an old, brown brick building. But, you forget the building’s age as soon as you step into the workspace, replete with new and old gaming accessories and loads (we’re talking loooads!) or gaming culture paraphernalia.

Entering through the lower floor, we were greeted by what must be one of the biggest QcK mouse pads ever, serving as a doormat. This is where the marketing team would have been working if the majority of them weren’t off at E3.

Even though one might think this team wouldn’t be as into gaming and nerd culture as other teams, there’s no shortage of character at each desk. When SteelSeries CEO Ehtisham Rabbani later told us that the company is made up largely of people who are passionate about the industry and the brand, the workspaces echoed his statement (except maybe not the struggling yogurt cup herbs and spices). 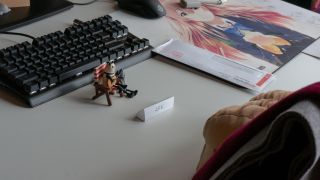 Going further in, past a simple meeting room, the gamer culture of the SteelSeries office only ramps up. The middle of the lower floor is a wide open community space with a few large TVs, an air hockey table, a full kitchen and just about everything for gaming. Excluding the kitchen, the space has a strong classic Mario theme going on.

There’s a row of complete PC gaming battlestations on one wall, decked out with SteelSeries peripherals and racing-style chairs at each And, in another corner, there’s a VR setup that looks like it could use some love (and one of the products we saw in development could be bringing that love.).

While there, we caught a few SteelSeries workers relaxing, having some lunch, and watching the big Super Smash Bros. Ultimate E3 reveal. The team taking a break from working on gaming peripherals to check out games just continues to hit home Rabbani’s message about the team’s passion for games. 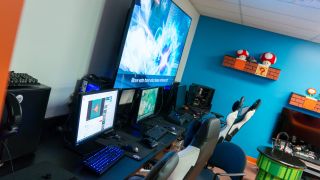 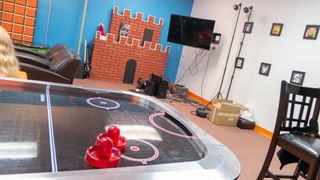 Past the lounge, SteelSeries has a couple of rooms made to give streamers and pro gamers a space.

The Apex Room is for streamers, giving them a space with all the essentials. There’s an ultra-widescreen monitor with a webcam, high-quality mic and Focusrite USB interface, and special lighting above it. There’s a flashy PC, and a PS4 as well. And, naturally, all of that is complemented by a SteelSeries keyboard (Apex M750 TKL), mouse (Rival 600), sprawling mousepad (QcK XXL), and wireless headphones (Arctis Pro Wireless). 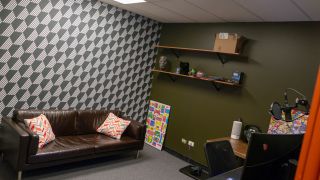 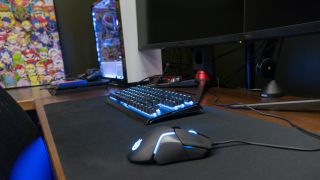 By the streaming room is a long room that used to serve as a practice space for the Winterfox esports team. An esports practice room isn’t uncommon for peripheral makers, as we got to see a similar one in our tour of Corsair’s headquarters in Fremont, California.

This training room felt like a tribute stuck in time to the disbanded Winterfox team. The Winterfox logo still painted on the wall only feels that much more trapped in time thanks to three clocks, none of which tick, on the wall nearby.

A whiteboard on the opposite wall in that room told a slightly different story, with what appeared to be plenty of thoughts on the SteelSeries Arctis 3 Bluetooth or possible the Arctis Pro Wireless headset scribbled onto the board. This whiteboard was also our first hint that someone in the office was an unrepentant doodle drawer. 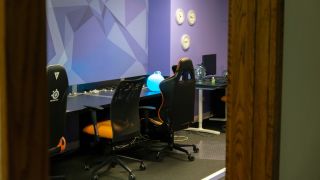 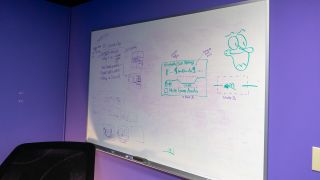 From there, we were headed upstairs to see where SteelSeries has some of its greatest minds at work figuring out how to get product concepts working in reality. But first, we had to pass through a portion of the building that had some real character. And, we were assured the service elevator, despite its outward appearance, remains in use.

Upstairs, a handful of people were at work in several cubicles. We overheard some talk about Human-Interface Devices and drivers, and it was clear these folks were figuring out how to make things work. While we can’t say if the office space is always like this or just was while we were there, many of the desks were packed full of monitors, laptops, and SteelSeries peripherals, of course.

Cubicle walls were lined with headsets from the latest Arctis series, back through Siberia and beyond. On one wall is a bookshelf with plenty of coding, advertising, and other reference materials. The space also had its fair share of whiteboards, some outlining plans, such as that for the VR Doorbell. Not surprisingly, the doodle drawer struck again on the second floor as well.

At the back of the top floor, there’s a sunlit room lined with windows. We were unfortunately unable to shoot any photos back there, because we might have caught a glimpse of some of SteelSeries’ upcoming products. But, we could see the Chief Technical Officer, Tino Soelberg, back there speaking most likely with Jeff Mahlmeister, the Director of Products/Head of Product Management. 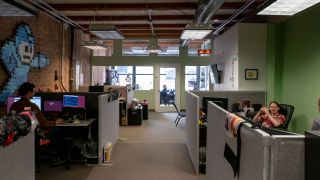 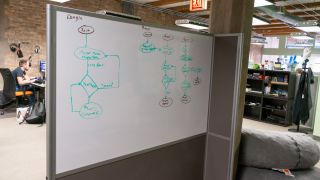 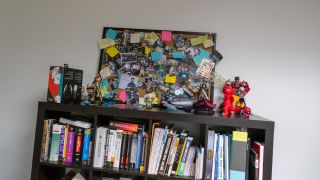 The middle of the upper floor has another small dining area, where we caught our last proof of an in-house doodle drawer. Opposite that is a spacious lobby area with framed print outs of product art, slogans like “if you suck you’ll still suck,” and accolades from tech reviewers. The space is also loaded with displays of SteelSeries current Arctis lineup of gaming headsets. 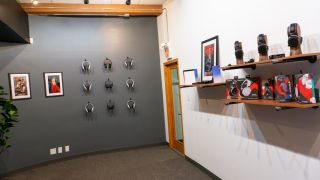 Though this ended up being the lobby we left through. We weren’t quite done yet. We headed further toward the front of the upper offices, stopping at a large conference room, named after the older Siberia line of headphones, to have a chat with Soelberg and Mahlmeister.

We discussed a lot of aspects about SteelSeries product development, design ethos, and how the company continues trying to improve on existing products and find new areas to improve gamers lives. We also got a little look into the stages of designing new products. Keep an eye out for the details from that interview soon. 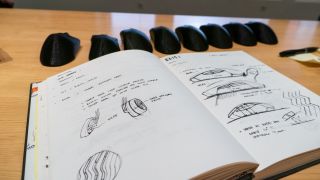 After that, we were headed to the very front, where two offices overlook West Randolph Street. In one of the sunny offices, we met with Rabbani (the CEO, remember?) to talk even more about what SteelSeries is all about. We had a good chat about how SteelSeries does business, what its products are all about, what we personally didn’t like about the Arctis 3 Bluetooth.

And, of course, when so many major tech companies opt for the coasts, we had to ask why Steelseries had decided to open its US office on the third coast, Chicago.

Rabbani had a simple answer: “Chicago’s easy, it’s the center of the country, so you get coverage for the full country, but direct flights to Denmark, which is kind of nice … From a talent pool standpoint, I actually think it’s competitive to any major city in the country. There’s so much great tech talent, and you can see it now, because you’ve got the Googles of the world, and you know all these tech companies are finally coming to Chicago…”

We wrapped up chatting about where we could and couldn’t smell chocolate in the area.

Afterwards, we headed out of the building to suck in some more of that chocolate scent that fills the air around SteelSeries in Chicago’s West Loop. Stay tuned for our interview with SteelSeries that will appear at the tail end of PC Gaming Week.