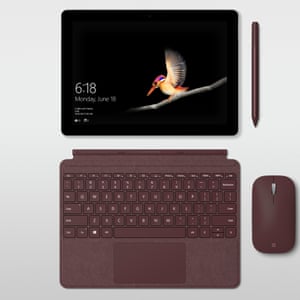 Microsoft has unveiled its direct challenge to Apple’s iPad, the cheaper, smaller and lighter Surface Go 2-in-1 Windows 10 tablet.

The Surface Go resembles other models of Microsoft’s successful Surface tablet range, but has a smaller 10in screen, is 8.3mm thick and only weighs 522g. But the biggest difference is the price: the Surface Go starts at £380 in the UK and $399 in the US, which is half the price of the cheapest Surface Pro tablet.

Panos Panay, chief product officer for Microsoft, said: “Surface Go is small and mighty, giving you the performance you need to be productive.

“When we designed this device, we had to ask ourselves what people want and need from a 10” Surface. The answers seem obvious – lightweight, productive, and accessible to more people.”

The Surface Go has Microsoft’s high-resolution PixelSense screen technology, including support for the Surface Pen stylus, with its full 4,096 levels of pressure sensitivity and very low latency. The tablet also has its own version of the detachable keyboard from the Surface Pro, and the built-in kickstand that supports up to 165-degrees of angle.

The new tablet is also the first to have both USB-C and Microsoft’s Surface Connector, following the introduction of USB-C to the Surface Book 2 in December. The Surface Go also has a microSD card slot, a headphone socket and Microsoft’s Windows Hello facial recognition camera for unlocking the device. It runs in Windows 10 S mode out of the box but can be switched to regular Windows 10 at any time.

While questions remain around customer demand for a lower-power Windows machine from Microsoft, experts were broadly positive about the introduction of a cheaper Surface device, saying that it made Microsoft’s offerings more competitive with Apple’s iPad and Google’s Chromebooks, which have found success in the education market.

Geoff Blaber, from CCS Insight, said: “Microsoft is getting more aggressive with the Surface portfolio. It’s a logical move to make the Surface concept more accessible.”

“The Surface Go is an excellent proposition. ‘Built for Office 365’ is a nice way of saying – it is not your mainstream laptop (and it shouldn’t be),” said Rushabh Doshi, mobility analyst at Canalys. “Definitely gunning for the value-conscious iPad Pro aspirers. And will be interesting to see if it can make a dent in education.”

The Surface Go will be able to pre-order with either 4GB of RAM and 64GB of storage or 8GB and 128GB from today in the UK, US and several other countries shipping on 6 August. A version with 4G LTE broadband will be available later in the year.