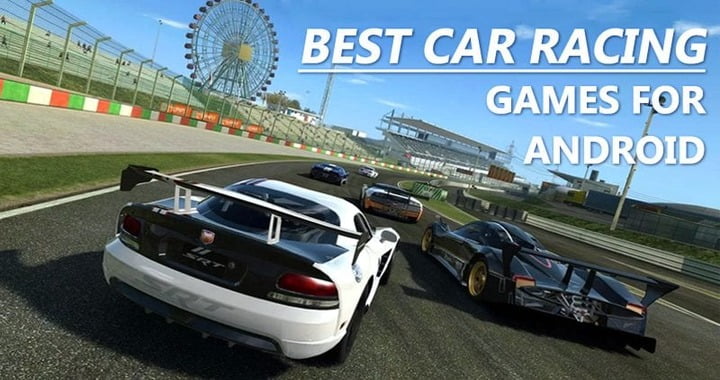 Well, there’s no shortage of apps and games on the Google Play Store. If we talk mainly about the games, Google Play Store divides games into categories. For example, there are arcade games, mind games, and more.

Google Play Store also has games for car lovers, and not only that, it has a separate section for car racing games. So, if you are a car racing fan and looking for the best games to play on your Android device, you are reading the right article.

In this article, we are going to list some of the best car racing games for Android. Most of these games were free to download, and they won’t bore you for sure. Let’s check out.

Well, Asphalt 8 is most probably the best car racing game ever made for Android. The game is high on graphics, and it has over 300+ licensed vehicles and 75+ tracks.

The career mode of this game is pretty addictive, and the visuals will keep you engaged throughout. This is the ultimate game for all car racing game lovers.

Real Racing 3 is a game that’s known for its stunning HD graphics and textures. With over 500 million downloads and the Play Store, Real Racing 3 is easily the best car racing game for Android.

One of the most addictive and entertaining physics based driving games ever made. And it’s free! You can face the challenges of unique hill climbing environments with many different cars.

Gain bonuses from daring tricks and collect coins to upgrade your car and reach even higher distances.

Need For Speed No Limits

Need for Speed No Limits from EA games is another top-rated Android car racing game available on the Google Play Store. It’s developed by the same team behind the popular Real Racing 3.

This is a car racing game that is known for its HD graphics. You need to win races, up your rep, customize/upgrade your cars in this game. The game offers you lots of race tracks and real-world cars to play with.

The ultimate drag race in the city streets, featuring over 100 licensed cars, stunning graphics, addictive gameplay, and intense online player vs. player competition. Play a quick race in a spare minute, or strap yourself in for a grand tour to the top of the leaderboards.

Horizon Chase is one of the unique and most addictive car racing games you will ever play on Android. The game is inspired by the great hits of the ’80s and 90’S.

The most important thing about the game is that it brings back the graphic context of the 16-bit generation. So, if you are a retro racing gamer, you will love this game for sure.

Need for Drift: Most Wanted

Well, Need for Drift: Most Wanted is a very underrated racing game. The game is available for free on the Google Play Store, and it offers you 100 tracks and 30 supercharged cars to test your driving skills.

From visuals to gameplay mechanisms, everything is good in this game. However, the only downside of the game is that there’s no multiplayer mode support.

If you love to play Monster trucks, desert trucks games on your Android smartphone, then look no other than Offroad Legends 2. The game is popular because of its cutting-edge graphics, unique physics, and amazing cars.

It’s a car racing game that offers 16 detailed vehicles and more than 64 amazing off-road tracks to race on.

Asphalt Xtreme may not be the most popular entry in the Asphalt series; still, the game is worth a play. The game is known for its impressive visuals and gameplay mechanism.

Asphalt Xtreme offers you over 50 monster machines to feed your passion for fast wheels and muscle cars. It also has a real-time multiplayer mode that lets you race against your friends.

Race the most authentic rally simulation on your mobile at an astounding 60fps. The game is very popular because it brings Console quality racing on mobile devices. It’s a premium app that costs you around $1, but there’s no in-app purchase after that.

You can connect your Facebook or Google Play Games account with Rush Rally 2 to race against your social friends.

This is one of the most realistic mobile racing games you can have on your Android smartphone. CarX Drift Racing gives you a unique experience of handling sports cars in a simple and intuitive way.

It has a career mode that allows you to unlock 40 different sports cars and new tracks. Additionally, there’s a multiplayer mode that lets you compete with your friends and beat world records.

Rally Racer Dirt is one of the best drift-based rally games for Android. Drive with hill climb, asphalt drift, and real dirt drift. Rally with drift together.

Rally Racer Dirt introduces the best realistic and stunning controls for a rally game. Have fun with drifty and realistic tuned physics with detailed graphics, vehicles, and racing tracks.

If you are looking for a free car racing game with realistic 3D graphics, look no other than Drift Max. Guess what? Drift Max includes 20 amazing drift cars, plenty of modification options, 12 amazing racing tracks, and more.

The game is known for its 3D graphics and cutting-edge car control system. Overall, it’s the best car racing game that you can play on Android.

The game offers you lots of racing tracks and amazing cars to race on. Apart from that, there’s also a multiplayer mode where you can challenge a friend or players from all over the world.

In this game, you need to beat your friends and foes to become the number 1 racer champion in the world.

If you love to play old games on your Android smartphone, you will love Road Racing for sure.

It’s a classic game for PC, which is now available for Android devices. The game is not high-in graphics, but it’s pretty addictive, and it’s a good one to spend some spare time.

You can play this game with your friends or against your friends or rivals. In addition, you can use your phone’s WiFi, Bluetooth to connect with other players and race against them.

Asphalt 9: Legends is the newest addition to the Asphalt series from Gameloft. The game features better graphics and soundtrack compared to the most successful Asphalt 8: Airborne.

The game is very high in graphics, and gameplay is quite addictive. The mission of the game is similar to Asphalt 8: Airborne.

Powerboat Racing 3D is an intense 3D racing game that is full of fun. In this game, the player needs to control a water scooter to win the race.

The races are often very tough to win, and players can choose their preferred tracks. The best thing about Powerboat Racing 3D is that it has a multiplayer mode that means you can now race against your friends.

Moreover, the gameplay is clean and addictive. Not just that, but the controls are also beautifully crafted to give you a real drift racing experience.

So, these are the best car racing games for Android. I hope this article helped you! Please share it with your friends also. If you have any doubts related to this, let us know in the comment box below.

Asus Zenfone Max Pro M1 Review: A value for money budget smartphone that can take the…