For some, the phrase “Hollywood and video games” doesn’t have positive connotations due to a history of bad licensed products, canceled projects, and terrible film adaptations. But Ubisoft hopes it can avoid that curse with the virtual reality game Transference.

Coming to PlayStation VR, Oculus Rift, and HTC Vive this fall (with a non-VR version also coming to PC and consoles), Transference is a first-person psychological horror game where you explore the corrupted memories of a strange family. In the story, scientist Raymond Hayes uploaded his mind — as well as those of his wife and son — to a computer simulation as part of an experiment. But something isn’t right with this digital world, and you must solve a series of puzzles in order to escape.

Transference is a joint effort from Ubisoft Montreal’s FunHouse team and film company SpectreVision. The Lord of the Rings actor Elijah Wood cofounded SpectreVision in 2010 with the goal of producing horror movies like Cooties and A Girl Walks Home Alone at Night. Both companies revealed Transference at last year’s Electronic Entertainment Expo (E3), and they talked about it again on Ubisoft’s stage at E3 2018, where game director Benoit Richer said it combined “the storytelling techniques of film with the interactivity of video games.”

Transference incorporates live-action footage within its claustrophobic levels (GamesBeat lead writer Dean Takahashi played a demo and found it “both interesting and creepy”). But the mashing of the movie and gaming worlds is happening behind the scenes, too. While Ubisoft is no stranger to working with Hollywood, the project is SpectreVision’s first foray into games, with Wood and his team being heavily involved with its development.

GamesBeat spoke with Richer and Wood shortly after the Ubisoft press briefing to find out what it’s like for the two different companies to collaborate. The following is an edited transcript of our interview.

GamesBeat: How did Ubisoft and SpectreVision end up partnering together?

Elijah Wood: We have a mutual friend that works in games that knew the folks at Ubisoft and knew that we were interested in VR initially, as a means of telling sort of a genre horror narrative. It’s obviously an immersive medium, so it can elicit emotional responses and we’re interested in that for storytelling. We met up with Ubisoft and expressed those ideas and they brought us out to Montreal and we had brainstorming sessions and pitches. We had game ideas, we had experiential ideas, and we all recognized that there was something there, that there could be a really fun, creative collaboration. And that’s sort of the genesis of where Transference came from.

GamesBeat: Did you intentionally set out to make a horror game? 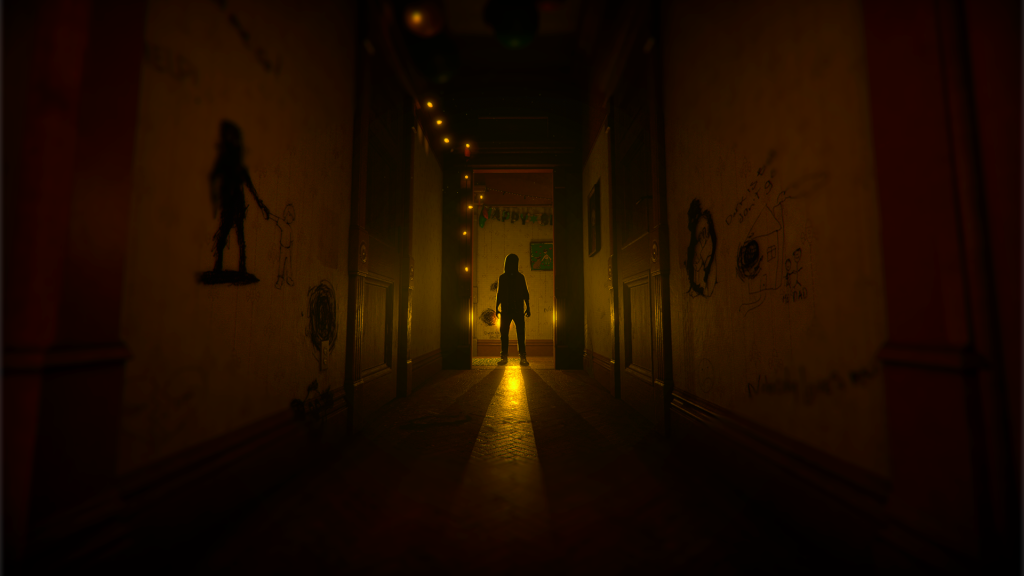 Above: Maybe don’t walk down the dark corridor where a creepy kid is waiting for you.

GamesBeat: Is that something Ubisoft wanted to do as well?

Benoit Richer: Yeah. It’s mostly about the suspense and trying something new. This is why this [FunHouse] team was formed, to try to be innovative in that field, and try — what would it be like to have [SpectreVision’s] film expertise mixed with our game expertise and make a game with that? What will end up from that collaboration? We’re learning every day. They give creative guidance. For example, I want this game to be about fear and empathy. How can we create a game with that? … And also the concept of uploading minds and corruption. It’s so inspiring to create games. So there definitely was an interest to try to do something innovative and new with [the project].

GamesBeat: What’s the collaboration process like between your teams? Are you always traveling?

Wood: There have been a few trips back and forth actually. The Ubisoft team has come here [to Los Angeles]. We’ve gone there [to Montreal].

Richer: For a major milestone, we did some workshopping together. We have a weekly Skype call where all the directors from Montreal and the guys from SpectreVision meet, and on top of that we’re texting each other constantly. Like, ‘Hey, I just saw this. It’s amazing! What about this idea?’ And how can we make the game better every time? Because we’re all creative folks and even though we have our field of expertise, we try to converge and try to create magic out of the escalation that we have between each other.

GamesBeat: Movie companies have tried partnering with game studios before, but the results have been mixed. It usually ends up with a terrible game.

Wood: [Laughs] It has a bit of a checkered past.

GamesBeat: So it’s interesting to see such constant communication between your two studios.

Wood: Not to speak on the past in regards to why those partnerships didn’t work, but this was a genuine collaboration at every level: constantly communicating, always with the same goals in mind, and trying to push each other. We were really challenged by them and hopefully they were challenged by us, and I think somewhere in the middle we were able to find what we wanted to find. … You can create great things if both entities, both groups of people, are trying to do that thing from a genuine place.

Richer: Exactly, everyone is open.

Wood: That’s the thing. We love games and we all love movies. I think that we were all just inspired by the ideas that we all had collectively in wanting to make those the best that we possibly could.

Richer: The bottom value of either a film or a game — there’s some stuff that we need to make sure that we respect. How do we guide the player from A to B without giving objectives? Under the sense like, ‘Hey, if we want to create anticipation and build-up in film, we’re doing this.’ But it was never like, ‘No, we’re doing a game and it’s like this and give me a script.’ Or the inverse: ‘Here’s the script, make a game.’ So it was a true collaboration right from the start, and like he was saying, everyone was open and genuine about trying to find new ways to merge our expertise.

Wood: Yeah. And it was never cynical or passive on anyone’s part. It was never, ‘Hey we’ve got this, can you take it and make a game with it?’ It was like, ‘Can we be involved at every level? We want to hear — we want to talk to your sound designer. Actually, we’ve got a composer we really love and I’ve loved for them to merge because we think our composer can add to the sound design of the film.’ We wanted to see artwork: ‘This is what we think that the house could look like. What do you think?’ It was [like that] every step of the way. And we wouldn’t have had it any other way because why else would you be involved in a collaboration like this? 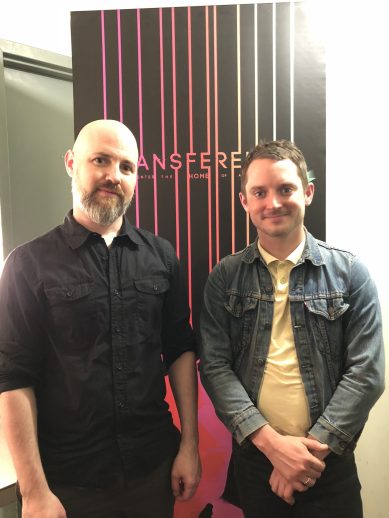 Above: Game director Benoit Richer and Elijah Wood at E3 2018.

We love games too much, and I think we just respect that world and respect the creation of something. And I think that was really why we wanted to be a part of it so intensely.

Wood: Yeah. There’s certainly — the writing of the game was sort of handled primarily by our side. But there’s writing on [Ubisoft’s] side, too. It really is a cross-pollination.

GamesBeat: Is it a different kind of personal challenge as well? I know you’ve done voice acting before with Double Fine in Broken Age. And so in doing something like this, I imagine it just opens up a whole new world.

Wood: It does, yeah. I’ve never been a part of the creation of a video game before, so it was super exciting. A total learning experience. I certainly understood prior what goes into making a game. I’ve been around the game industry for a long time — my brother is a producer — but to actually be a part of that creative process, it was just super gratifying. It’s what I love about making films, too. I love getting together with a group of people around a piece of creation that you’re all really excited about.

That’s what a movie is, too. There’s a piece of material that someone’s written that’s really exciting, and there’s a director’s vision and it’s a group of people getting around that director’s vision. This is not dissimilar in the sense that there was a nugget of an idea and we’re like, ‘Wow, that’s really inspiring. Let’s try and push each other to make this really, really interesting.’