RGB lighting has taken over my life. My PC and every peripheral on my desk glows like a radioactive spill site, and I love it. Now, I’ve taken this obsession to the next level with the help of Philips Hue smart lights, which light up homes and other spaces — but I’m using to make my house feel like it’s inside a giant CRT television.

Although the Philips’ Hue lighting system is expensive, it justifies that price with powerful customization controls, intelligent routines, and free updates like the recently launched Hue Sync app. To use Philips Hue at all, you’ll need the $60 Smart Hub, and then you’ll need the LED lights. The color-capable bulbs sell for around $50 each, a LightStrip Plus is $90, and the bowl-shaped portable Hue Go lamps are $80 each. Of course, since these are LEDs, they will take decades — not months — to burnout, so I think of them as an investment.

Philips isn’t the only company in this space. DreamScreen TV is a competitor that does smart backlighting kits for TVs that start at $200 and go up to $400. That is potentially less expensive, and it has a dedicated HDMI passthrough hub that doesn’t require a software solution like Philips — but this is a TV-focused solution whereas you can set up Philips Hue as the lighting for your entire home and pick and choose which lights you want to sync with your device.

I haven’t use the DreamScreen option yet, but I’m going to look into it. For now, I can say that I’m impressed and happy with the results of the Philips Hue experience. The company made the syncing process easier with the introduction of the Hue Sync desktop app, which captures anything happening on your PC and re-creates it with the LED lights around your room. You can sync it with certain games on Xbox One as well, but that requires developers to add support for Hue into their games.

You can set up one light behind your monitor, or you can set up multiple lights all around your room. The Hue app then asks you to give the estimated position of each lamp so that it can accurately reproduce the positional lighting effects of the onscreen action. If one side of a scene is red and the other is orange, for example, the lights on the left side of your room will have a red tint and the ones on the right will look more orange.

It’s a powerful effect that I have found immersive. In something like the colorful combat-heavy exploration game Dead Cells, I get a lot of cool ambient effects as I move through the blue and yellow dungeons. But then my whole room will flash a frightening bright red any time my character takes damage. Or my walls will light up bright white if I travel through one of the transporters.

But even the subtle effects are amazing. When I was first testing out Hue Sync, I put just one of the Hue Go lights behind my monitor while playing Warhammer: Vermintide 2. I walked up to one of the fires, and it was mesmerizing to watch the onscreen flame light up the wall behind my display as well.

More than anything, I appreciate how simple Philips Hue is to set up. With something like the Hue Go, it’s easy to use its battery mode to test different positions. The app never makes it difficult to set up a new room with separate active Hue lights than another room or your front porch or basement. The only headache I’ve encountered is that using Hue Sync requires you to update your lights, and don’t feel bad if the idea of patching the firmware of some lightbulbs overwhelms you with existential dread. Even worse than that, though, is that the process can take as long as an hour to update just one light.

Once everything is on the latest software, however, everything just works. And it looks so damn cool. 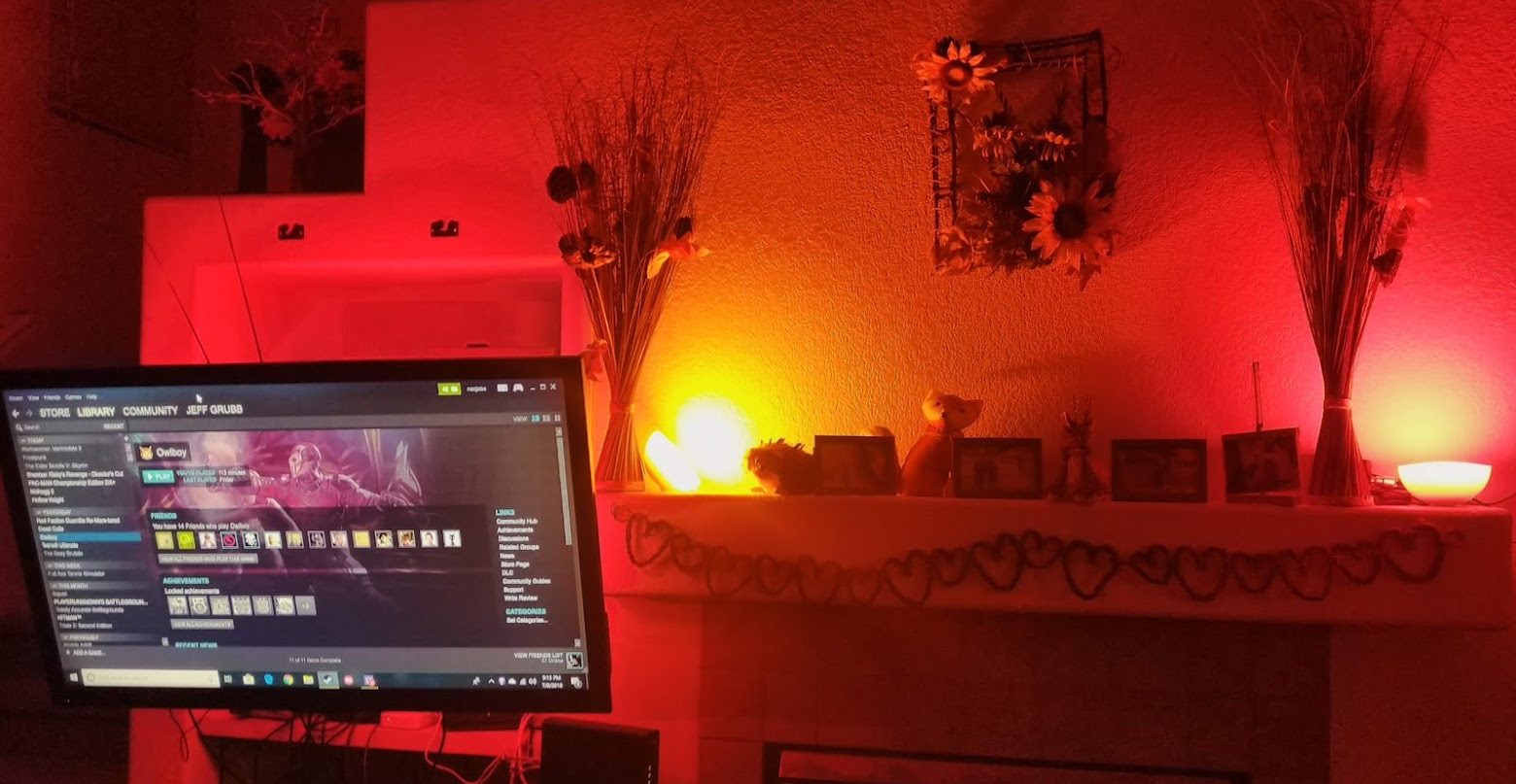 I’ll finish up by noting that the Hue lights are the one of the rare tech toys that my wife is enthusiastic about. I can build a cool new PC, test out a $4,000 Atmos soundbar, or try out an Xbox One X without her noticing or caring — she has her own concerns. But she is into these lights. She loves syncing them to whatever we’re watching, but she also enjoys turning them to a dull red in the evening to help get her and our kid ready for sleep. Or she enjoys setting them to a brighter tungsten white for reading.

Hue is feature-rich and simple to use to the point that it makes her want to experiment with them. For example, she discovered and showed me that the Hue app can give you new lighting profiles based on the various colors in a picture that you take. That kind of mood lighting is silly and fun, but it makes the Hue premium seem worth it.

And I’m fully into the Hue ecosystem now. As the lights burnout around my house, I’m going to start replacing them with Hue instead. Bulbs are expensive, but they’ll last longer and look cooler, and that’s worth it to me.

Tencent games restrictions on minors to play ‘Honor of Kings’

How to Get Street Fighter Cammy Free in Fortnite