Tempest 4000 is the PlayStation 4, Xbox One, and Steam PC version of Tempest 2000, or more accurately, of the spiritual sequel TxK that Minter’s company Llamasoft released while Atari was temporarily defunct. In addition to updating TxK’s graphics, including 4K resolution support, it includes three full soundtracks’ worth of Tempest 2000 and TxK music.

As a huge fan of the Tempest series, I’d love to tell you that the Xbox One version I’m reviewing today is great, but it’s firmly in the “good” category due to some rough UI and UX edges. My hope is that a postrelease patch addresses its issues, as a few tweaks would make Tempest 4000 much easier to recommend to more people.

A fun and challenging game

Putting its aesthetics aside, the core game inside Tempest 4000 is still Tempest — a “tunnel shooter” where your Claw spaceship shoots enemies as they advance from the distant background of a wireframe “web” to the foreground. You move left or right on the web’s edge, firing inwards to take out targets as you enhance your abilities with powerups. For instance, a single-use Superzapper kills all on-screen enemies, weapon upgrades multiply your bullets, an AI droid clears enemies at its own pace, and a jump upgrade lets you temporarily vault off the web. 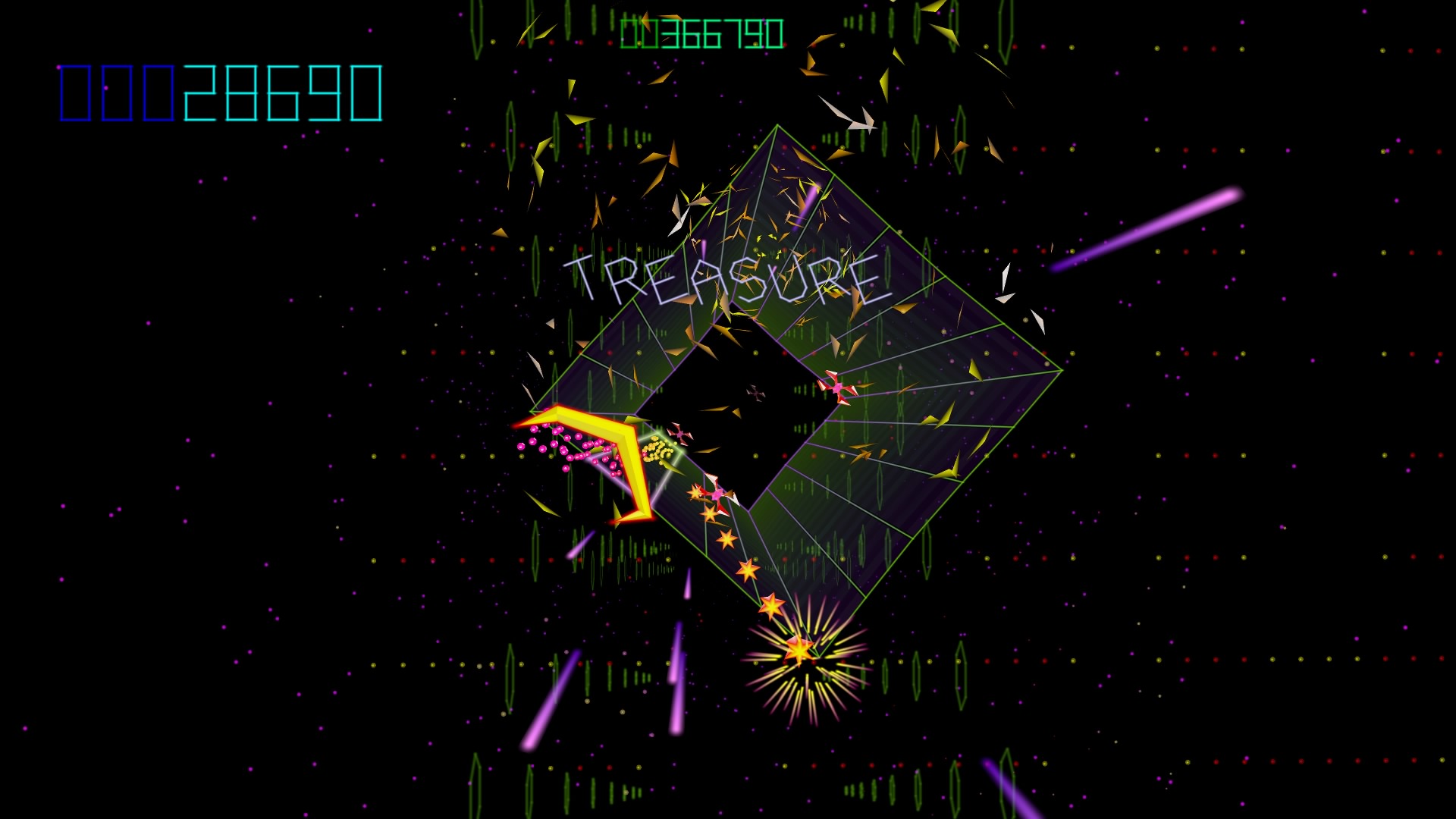 Above: Screenshots only do modest justice to the pixel and polygon explosions you’ll watch as your Claw (left) and AI Droid (bottom) shoot from the outside of the “web” towards targets inside.

Each of the 100 levels offers a different web shape — some static, some rotating or folding in on themselves — and enemies typically become more resilient and/or numerous with each passing level. You needn’t restart at level 1 when you run out of lives; you can start a new game from any stage you’ve reached. However, you will likely start from your last stage with zero extra lives, so if you get hit once, the game ends.

This is a fair compromise to let players keep progressing, but around a third of the way through the game, it will be hard to advance through some levels without a spare life. Consequently, you’ll find yourself revisiting stages over and over again, sometimes having fun, other times dealing with profound frustration — especially as webs start to spin around, making your Claw difficult to precisely control.

An even more detailed take on Tempest

Beyond his crack coding skills, Minter is known for two things: his love of livestock (reflected in Llamasoft’s name), and his extraordinary talent as a lightshow creator. Tempest 4000 uses the 1080p and 4K resolutions of modern TVs to sharpen the edges of Tempest’s classic vector objects, but the game’s signature feature is its intentionally overwhelming special effects engine. Above: Completing a level can lead to the web dramatically shattering as you fly through it to the next challenge.

Inspired by 1990s rave culture, Tempest 2000 was packed with pixel-exploding text, melting effects, and thumping, trance-inducing beats. While the exploding text is toned down, Tempest 4000 amps up overlapping visual echoes, shattering polygons, and wavy distortion effects. By design, the game attempts to induce a trance-like state in players, so when it’s all just too much to look at, that’s the point. It looks much better in motion than in still images. 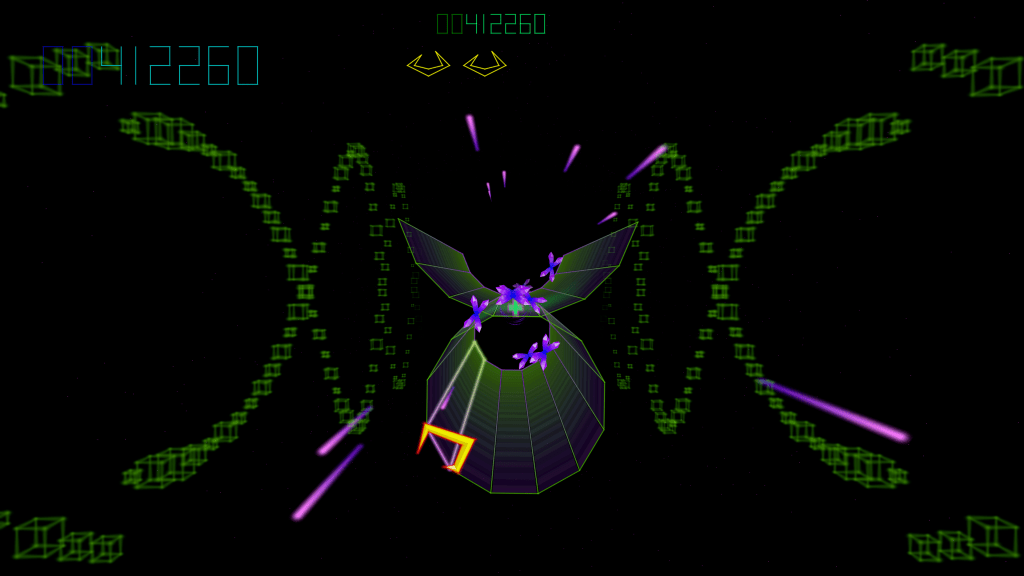 Above: Many of the webs are presented at suboptimal angles that make distant targets harder to identify, an issue Tempest 2000 addressed with multiple camera choices.

One thing that’s regrettably missing from Tempest 4000 is a camera toggle. In Tempest 2000, players can switch between default, locked, and close up cameras that improve your perspective on various levels, but in Tempest 4000, you’re stuck at one angle that can make it hard to see some objects in the distance. Additionally, many of the webs only fill the center of a 16:9 screen, leaving background patterns to occupy the otherwise black space. If there’s a postrelease patch, a Tempest 2000-style camera option to fill more of the screen with webs and lock certain webs in one position would be one of my top three requests.

Several bonus stages break up the shooting action. After each web, you get extra points for steering a spark-like version of your ship through the center of a light tunnel towards the next level. Originating in TxK, this is a simple addition to the Tempest formula, and initially confusing because the spark is too small on screen, but it keeps you occupied between levels. The game is better for its inclusion. Above: Between stages, you try to guide a tiny spark through the center of a moving polygonal light tunnel to get bonus points.

Carried over from Tempest 2000 are first-person Warp bonus stages where you fly through areas filled with repeating patterns, steering your way through floating markers that increase your speed. Previously, the visuals mostly looked like melting 2D surfaces, but in Tempest 4000, the stages include more complex polygonal objects and distortion effects. 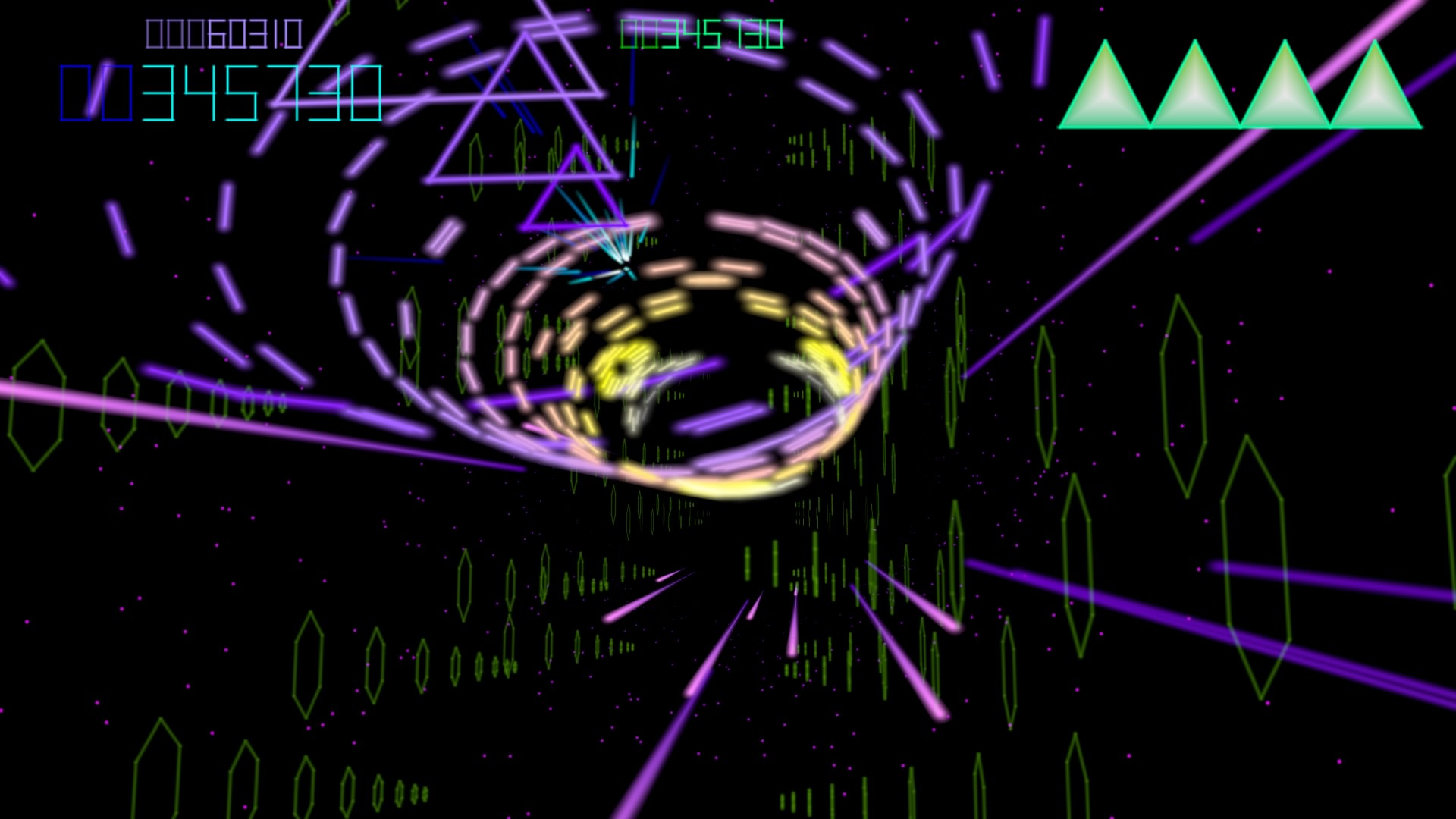 Above: Collect four warp triangles and you’ll get sent into a visually and sonically hypnotic bonus area.

The Warp bonus stages look very cool, but their “keep flying straight with minor adjustments” gameplay serves as a reminder that Tempest 4000 hasn’t evolved much beyond its predecessors apart from graphics. These are the same concepts found in Tempest 2000, only with fancier wallpaper. 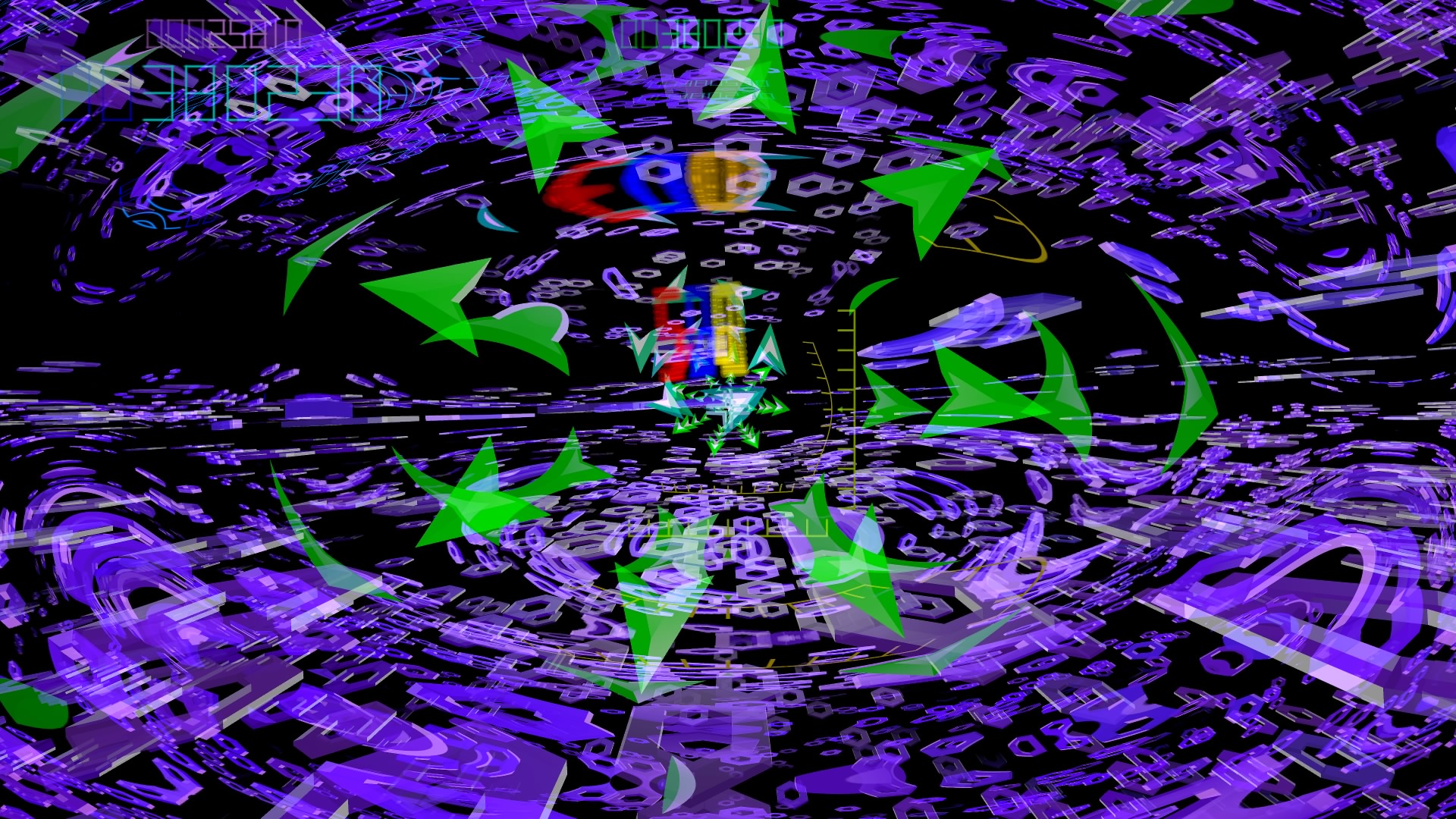 Above: Can you spot the UI elements in the center of this screen?

And despite the “4000” name, one gets the sense that the assets weren’t wholly rethought for modern 4K TVs. The navigational UI elements are consistently at least a little too small for no good reason, so you’ll squint to make them out against the rest of the art. By the time you reach these stages, however, your eyes and brain might be too melted to notice.

Tempest 4000 officially missed its first release date, but actually hit the online PlayStation Store back in March for a very brief period of time. I know this because I excitedly bought the PlayStation 4 release, only to see it disappear from the Store for over three months. As a result, I’ve seen Tempest 4000 in both PS4 version 1.02 and Xbox One version 1.22x. Above: Only one of these “options” menus actually contains options — and then, not many.

The game seemed basically done in March, but the UI was surprisingly threadbare, so I hoped it would improve. Instead, it barely changed — “Options” only lets you toggle volume levels and languages — and the Xbox version I tested has minor visual glitches. In an early level, I’ve seen the right side of the Xbox screen briefly fill with a disappearing box, an issue I’ve never seen on the PS4 version. The Xbox game also has an unusual initialization period after it’s loaded. 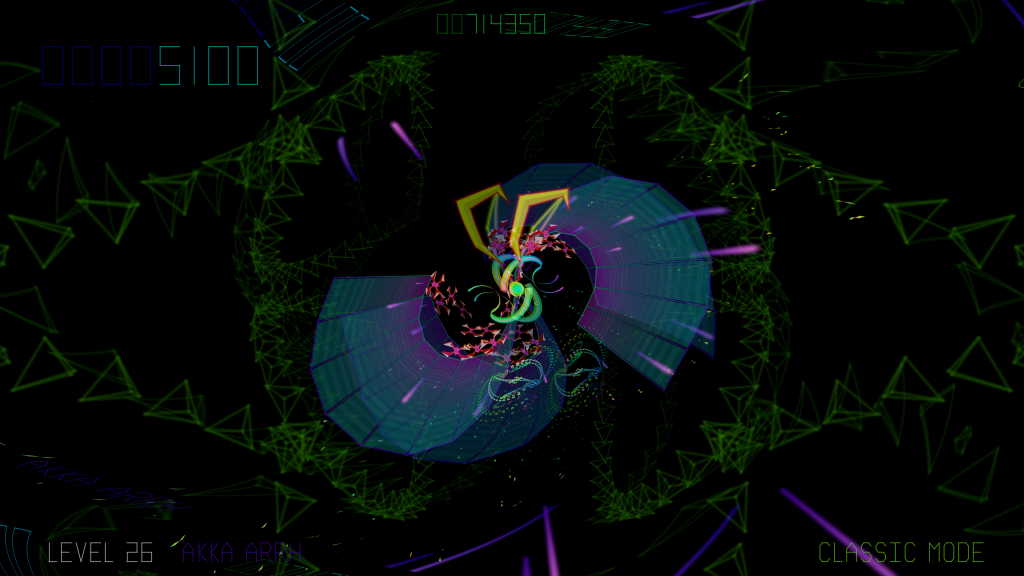 Above: Starting in the 20s, some levels spin and warp while you’re playing, making the unadjustable controls unreliable as well. Camera and control adjustment options would help.

Apart from cleaning up the Xbox issues, my second patch request for this title would be additional visual, music, and control options. For now, the game delivers TxK’s basic visual experience at a much higher resolution, which is nice. But giving players the ability to choose the speed of the Claw’s movement would help. And it would be great to have at least a little control over the backgrounds, or see them moving in sync with the music — something that Minter’s Virtual Light Machine for Jaguar proved was possible. I’m not holding my breath for the latter changes to happen, but they would take Tempest 4000 from “good” to “amazing.”

On a positive note, Tempest 4000 has three impressive soundtracks to choose from — the Jaguar’s brilliant original Tempest 2000 chip music, enhanced CD-quality mixes of the same soundtrack, and completely different tracks from TxK. While the newer TxK tracks never reach the unparalleled heights of Tempest 2000’s most remarkable songs, it’s great that you can choose between multiple playlists. 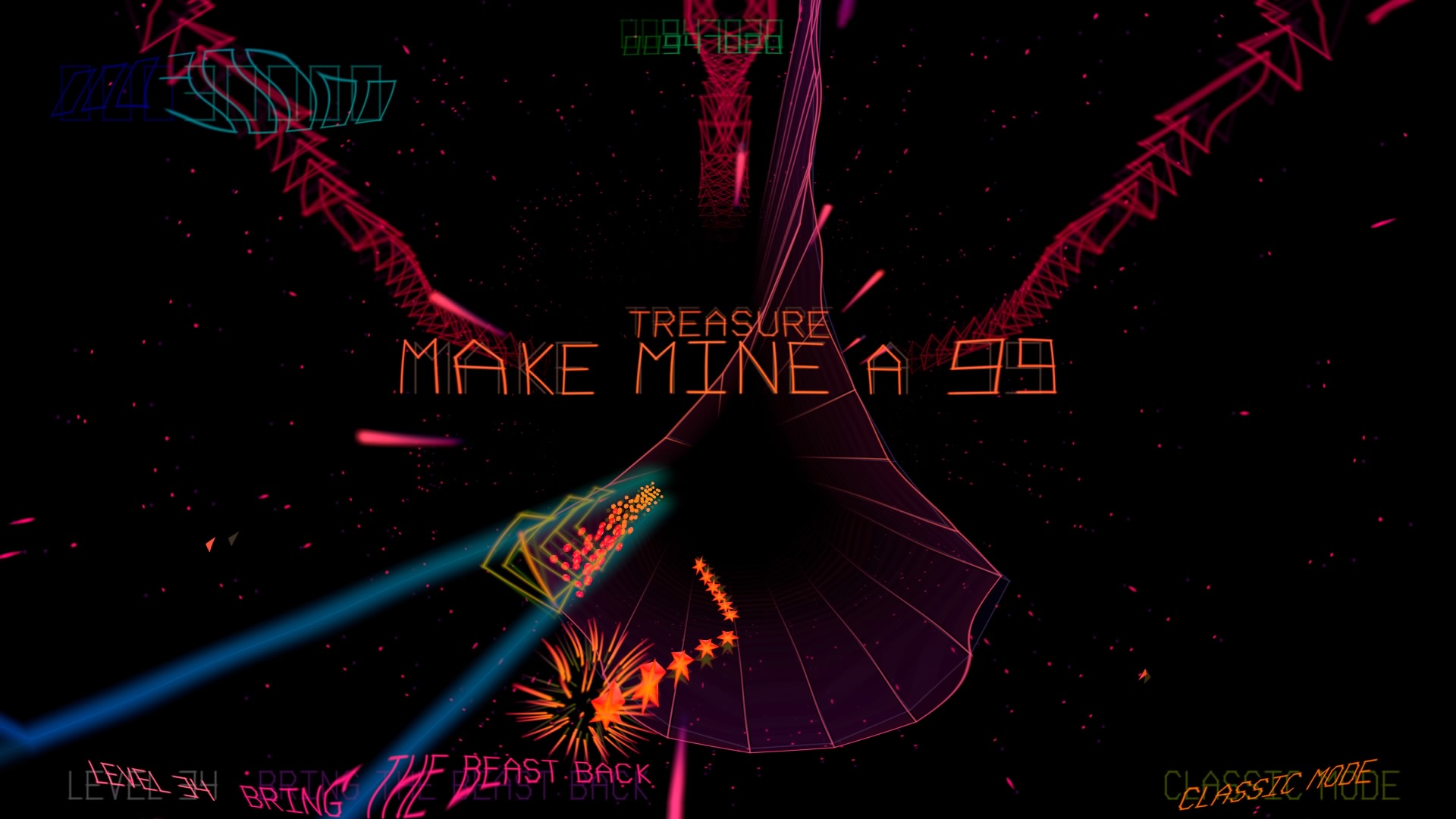 Above: Tempest 4000’s use of rainbow colors evolves well past the original Tempest, but it doesn’t prominently feature the melting effects of Tempest 2000 or its little-known Nuon sequel, Tempest 3000.

But it’s not great that Tempest 4000 omits even basic audio playback controls. I thought it was weird when version 1.02 of the game never flagged that you can switch between the three soundtracks by pressing the Triangle (PS4) or Y (Xbox) button at the Level Select menu, but version 1.22 doesn’t mention that detail, either. Moreover, there’s no track selection feature, so you’re stuck listening to a single song for around eight webs. The promise of a new song might be an incentive to complete multiple stages, but with such a huge soundtrack to explore — and so much need to replay certain frustrating stages — it would be better to let players have more control than a volume slider.

No VR support, but plenty of obscure text references

As many VR fans will attest, it’s a huge disappointment that Tempest 4000 doesn’t include a VR mode on the PS4 or PC. This is certainly both the right game and time to include VR support, but it was left out for reasons unknown. Instead, Jeff Minter’s Twitter account suggests that Llamasoft is working on something else in VR. My third and final patch request would be to add this feature in, as I can’t imagine any game justifying long, happy stretches of VR playtime like Tempest. 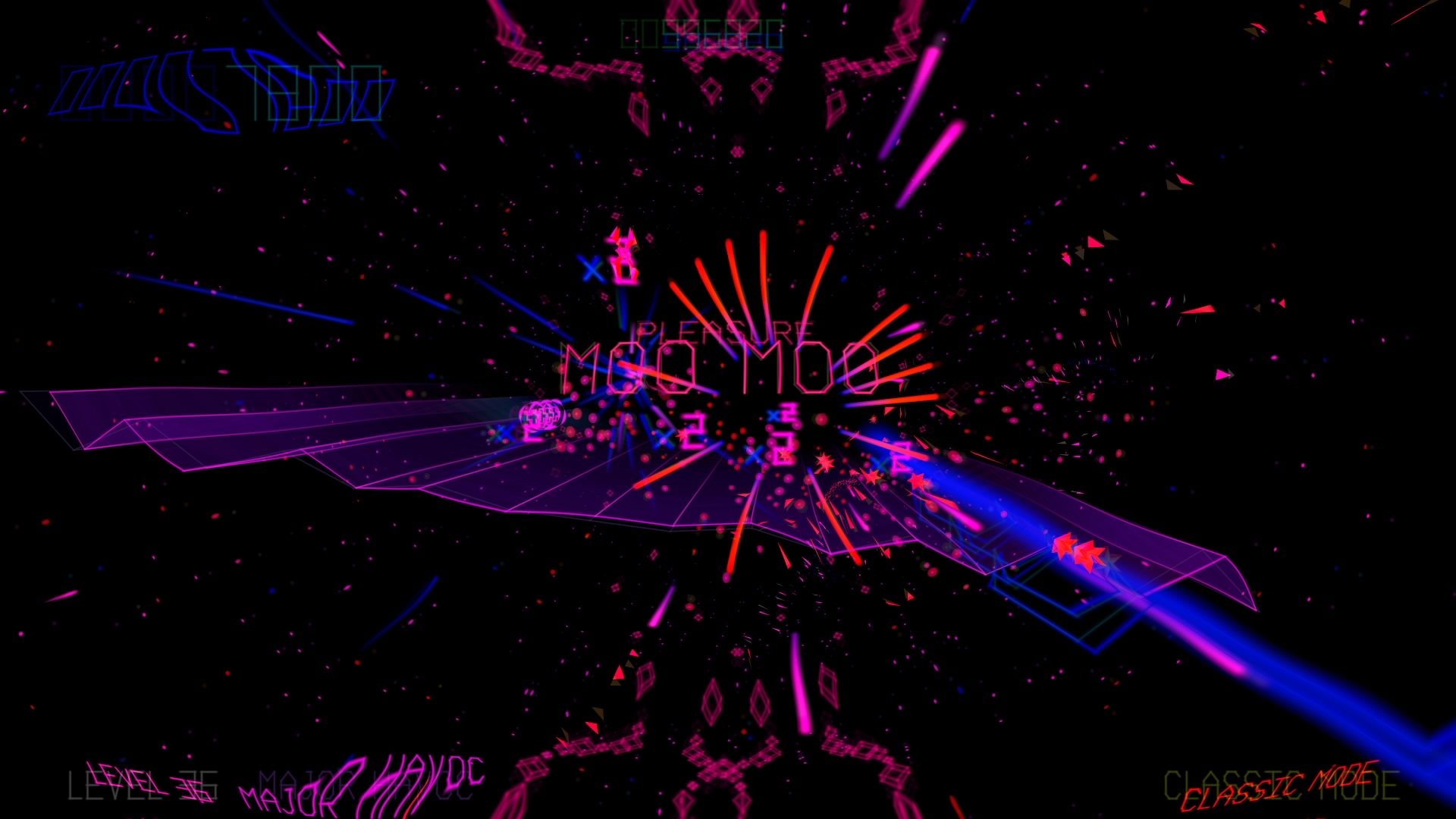 For the time being, you’ll have to content yourself to be amused by Minter’s numerous in-jokes, including references to classic Atari games, devices, and slogans, various types of livestock, revolutionary trance group The KLF, and Indian cuisine. That these references appear in Tempest at all is a reminder that Llamasoft is a two-person developer, and now working for a very different Atari than the one older gamers remember.

I went into Tempest 4000 hoping to fall in love, but instead found it to be somewhat underwhelming, with mystifying omissions. Why include three soundtracks without providing any clue to use them? Where’s the VR mode? Why use so little of the screen to display many of the webs? As much as I prefer to review games for what they are rather than what they’re missing, Tempest 4000 only partially lives up to its potential. 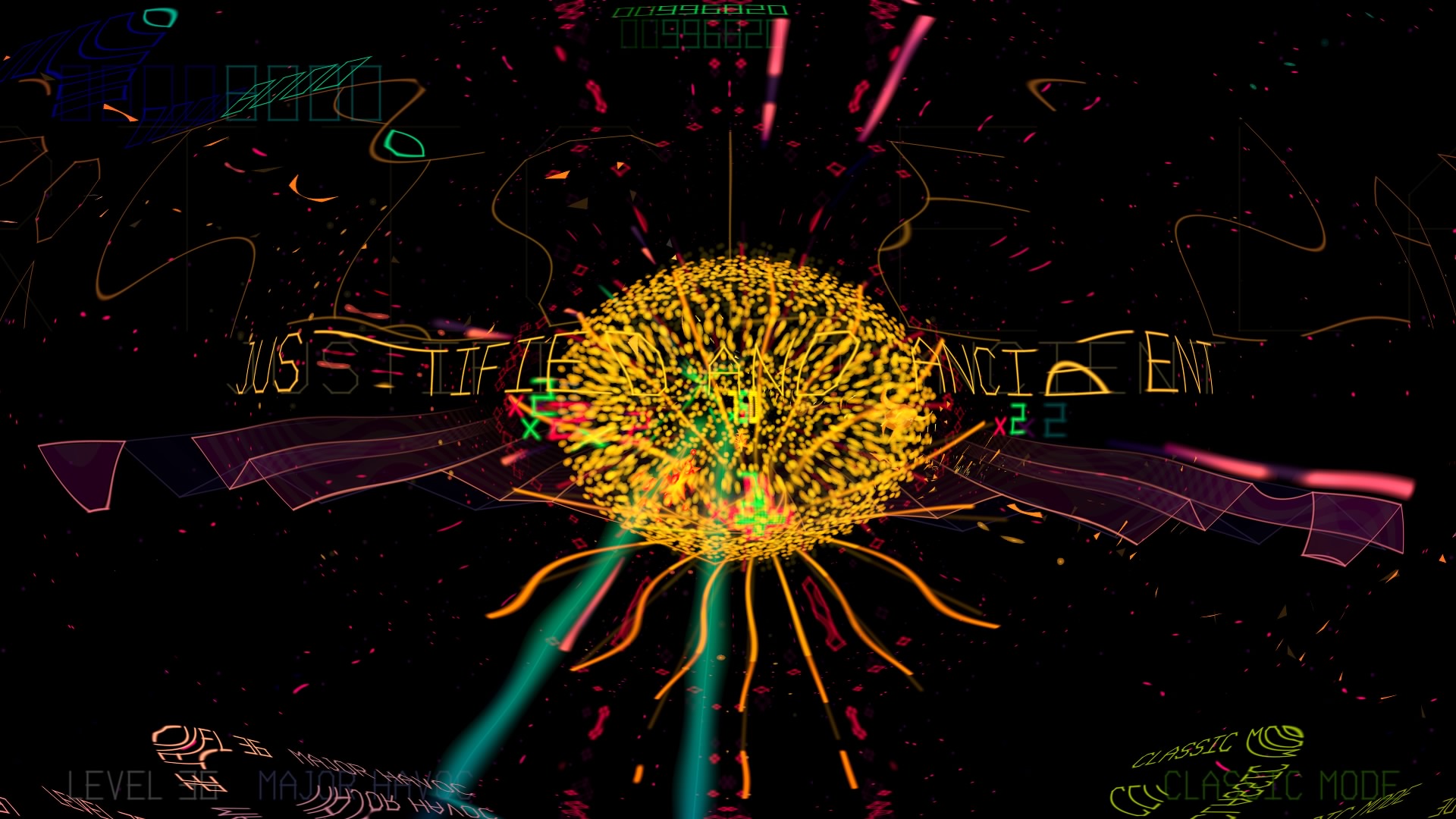 Above: Tempest 4000’s high-polygon special effects are its biggest draw over prior versions — but you’ll only be able to focus on them when you die or beat a level.

Even if it feels incomplete, Tempest 4000 is still worth playing. The visuals remain entrancing, the music is as powerful today as when it was released, and the task of clearing baddies from webs continues to be challenging. If you can look past the roughest levels, you’ll find this to be a fun and highly memorable game. Here’s hoping Llamasoft gives it a little post-release polish so it can become a modern classic, just like Tempest 2000.

Tempest 4000 is available today for PlayStation 4, Xbox One, and Steam PCs. The publisher sent us PlayStation 4 and Xbox One codes for the purposes of  this review.