The Assassin’s Creed franchise is among the biggest of the major blockbusters in the gaming industry, and building them is only getting more complicated as each entry in the series grows larger than its predecessors. Art director Raphael Lacoste and his team of dozens were able to manufacture the world of ancient Egypt for last year’s Assassin’s Creed: Origins through a combination of hard work and new technologies that make their jobs easier.

As Ubisoft’s art and tech crews worked together to develop new methods to deliver assets more efficiently, they also push themselves to create even more. And that led to one of the biggest games the publisher has ever made.

“On Origins, it was the first time we brought to life a whole country,” Lacoste explained to GamesBeat. “The scope was amazingly huge and demanding. To make sure we could deliver the most impressive experience, we needed to create new tools and developed a new procedural pipeline in our engine.”

Ubisoft developed procedural tools to produce vast spaces, but the artists still go in and adjust everything manually. So even when the team designs something that gives them more time, they funnel that back into polish and building even bigger environments. 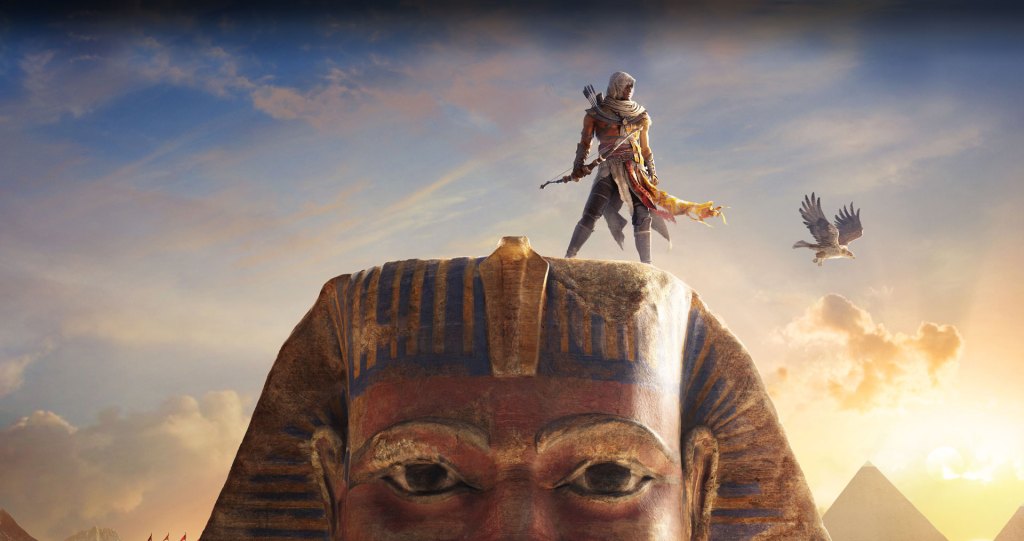 “Everything is crafted by hand even if the procedural tools help us a lot to create large environments like forests and desert lands with rocks and dry grass,” said Lacoste. “The procedural benchmarks and recipes are all done by hand by an artist and conceptualized by our illustrators. We aren’t yet in a position where we want the tools to create everything for us, but we need them to help us crafting very large maps with all the diversity we need.”

So technology isn’t threatening the jobs of artists at Ubisoft yet even if AI and procedural technologies are improving rapidly. But Lacoste and his team embrace this tech because they feel the pressure to keep costs down.

“It is a pressure for the directors,” said Lacoste. “Not only for me, but also for the technical directors who have the responsibility and challenge to give us the best tools to generate procedural data like forests, mountains, and roads on such a large map.”

But as the tools get better and the artists improve at using them, this enables games to expand in scope without drastically increasing the size of the budget. That means the next Assassin’s Creed can have even more art and assets without turning into a bigger risk for Ubisoft.

For more from Lacoste, you can read my full interview with the art director below:

Raphael Lacoste: Yes it is, if we talk about intentions, concept arts and illustrations it is off course more achievable, and conception stage is a very exciting phase because we dream this world before actually building it. After all directors are aligned, When it comes to actually bring to life a whole country, it is another challenge. The team is huge and steering; giving directions while making sure we keep the original intention is a great challenge. On Origins, we can say it was Pharaonic!

GamesBeat: My limited understanding is that creating assets for something as large as Origins is one of the most expensive and time-consuming processes when it comes to making a game. Is that accurate, and does that create any pressure for you as art director?

Lacoste: On Origins, it was the first time we brought to life a whole country; yes, the scope was amazingly huge and demanding. To make sure we could deliver the most impressive experience, we needed to create new tools and developed a new procedural pipeline in our engine.

The lighting system and rendering were also redesigned from scratch to allow a dynamic lighting and time of day, supporting a complex global illumination system. The technical artists used substance designer to push the textures of the terrain to the next level and re-create impressive displacement maps. We are extremely happy with the results. The Visual Effects Society award we won is really a consecration for our hard work.

For sure, it is a pressure for the directors, not only me but also for the technical directors who will have the responsibility and challenge to give the best tools to generate procedural data like forests, mountains and roads on such a large map.

GamesBeat: Someone mentioned a Game Developers Conference talk to me that was about feeding art to a machine learning protocol that could then generate massive quantities of new art at a fraction of the cost. I may have the details wrong, but the question is still the same: how are new technologies changing, improving, or threatening your job?

Lacoste: Changing, improving, but not threatening. At least on projects like ours where the idea is not to make a simulation of the real contemporary world.

On AC, we bring to life our perception of a place, with our creative filter, artistic minds. We use documentation and create plausible worlds, but our worlds aren’t realistic at all, and this is not our goal.

We want to create place where people have fun, fall in love with the world, our Egypt is a love letter to the country and its past. Everything is crafted by hand even if the procedural tools help us a lot to create large environments like forests and desert lands with rocks and dry grass, the procedural benchmarks and recipes are all done by hand by an artist and conceptualized by our illustrators. We aren’t yet in a position where we want the tools to create everything for us, but we need them to help us crafting very large maps with all the diversity we need.

The actual terrain we use for the basic layer of our biomes is completely designed by artists and level designers, this is very important as we have to bring the whole diversity of a country on a very reduced scale and make sure the world is interesting to explore. We don’t use satellite maps in the final data! 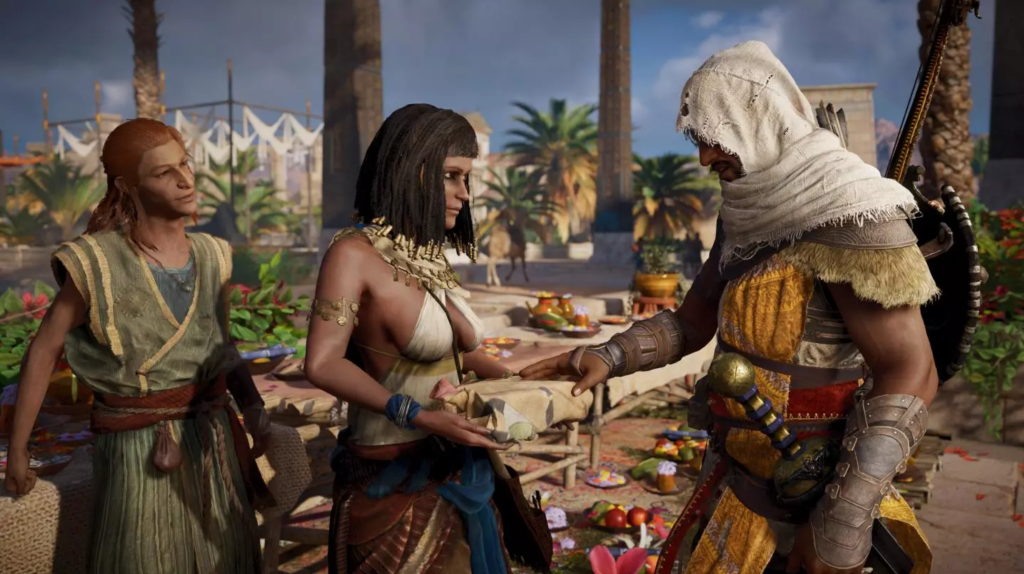 Above: Assassin’s Creed: Origins in action.

GamesBeat: About Origins itself, what kind of say does the art director have on the setting, or is that something that is decided and then they bring you in?

Lacoste: It depends, we had in the past a list of settings we wanted all to explore for the brand, in the case of Egypt, I think the art team and I had an impact on the decision.

GamesBeat: When the setting is decided, how much research do you do?

Raphael Lacoste: We start on a very early conception stage by research and concept arts. We create many illustrations and sketches to find our style but also define the appeal of the world. Define some memorable Characters.

We work with experts to get useful historical facts as informations for our creative process. But the goal is never to be literal on the recreation of the places, we always want to bring emotion and mysteries to the player. It is important to note that on AC our main goal is to create immersive and moving experiences.

GamesBeat: As art director, I’m sure you have to take artistic liberties with history, what are some examples about where you sacrificed historical fact to make a better game?

Lacoste: Of course! I just mentioned that our goal is not to be too factual but more creative in our process, and here we are talking about game creation and entertainment, not documentaries.

Another point I could bring is that it is interesting to place ourselves in the shoes of people living in the time period we work on, for instance, what would it feel like to be an Egyptian discovering the lighthouse of Alexandria? The 139 meter khufu pyramid covered of reflective, blinding white polished stone and a gold tip? We need to give this impression back to the player, and for sure we need to stylize, play with scale and light.

In the case of the temple of Ptah in Memphis, we doubled the size of the pylons to make sure we could see the temple from the distance but also to give this sense of epicness and a magnificent scale to the main landmark of the old Egyptian city…

Lacoste: For sure, but as you know Ancient Egypt is a lost country, so we had to re-create a lot, with references but also from imagination.

Nothing is left from Memphis, Alexandria, only a few stones and walls, statues were found.

We had a lot of creative freedom but worked closely also with Jean Claude Golvin, an historian Egyptologist and watercolor artist.

This was a very inspiring and creative experience to work with him, he helped us to create the layouts of the cities and the most iconic landmarks with a particular attention to what makes them “credible”, still with a great sense of mood and artistic flavor. We brought back to life The Great library of Alexandria, Cleopatra’s palace, the great city of Memphis, Crocodilopolis, Cyrene… people will discover how beautiful, magnifiscent were these places more than 2000 years ago, with the vibrant colours and impressive scale of the monuments.

People will off course recognize the Giza plateau while playing the game. Players will also enjoy the diverse natural landmarks of Egypt like the Nile delta, the White desert with these mysterious shaped rocks, the Qattara depression, Fayoum oasis, Siwa … Many places still look almost identical in the real world. I would say, our Natural world is as diverse as Egypt can offer in terms of biomes, fauna and flora variety and beauty… 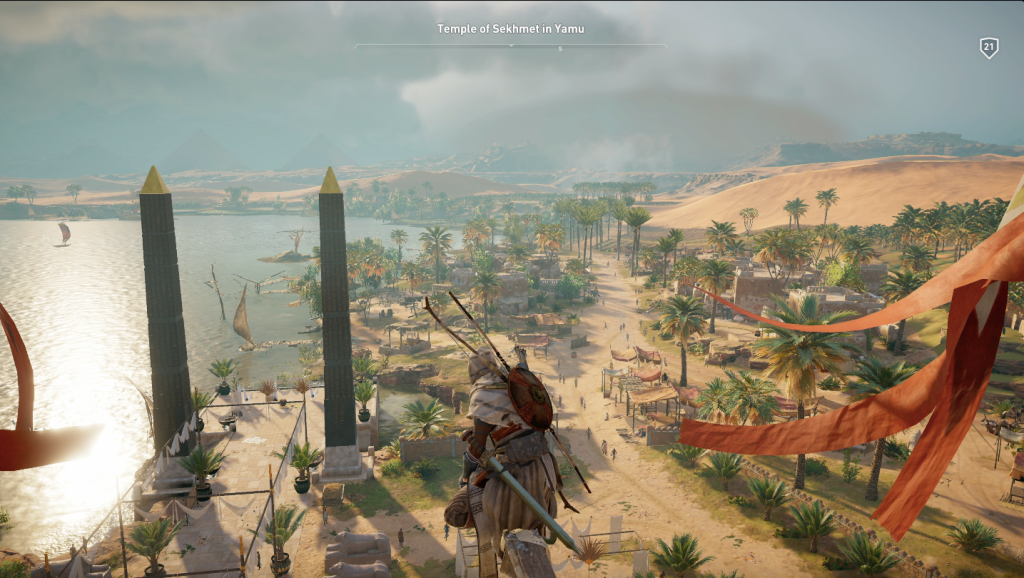 Above: The world of Origins is massive.

GamesBeat: Origins is set in a time well after most of the recognizable Egyptian landmarks went up, so instead of re-creating pristine, accurate tombs and pyramids, you are showing them in a somewhat ruined state. Does that make a difference to how you approach your job?

Lacoste: In this specific case, it is important to note that there is the same time between the Pyramids and Cleopatra than between Cleopatra and us!

Can you picture that in 49BCE, some Egyptian temples and Pyramids were 2000 years old ?
It means that for Cleopatra, there was already a very rich historical background in Egypt, temples recovered by sand dunes. The city of Memphis was built a long time ago and ruins of past magnificent monuments were everywhere.

However, some temples were brand new like the Ptolemaic Temple of Edfu. This temple was for us a great inspiration to show the vibrant colors and polished sandstone of Egyptian temples in their golden ages.

The contrast between the new Greco-Roman architecture in Alexandria and Ancient Egyptian buildings of Memphis is also a very interesting part of AC Origins, bringing a rich contrast and visual diversity, as well as a deeper environment design and historical background.

How to Connect an Xbox Controller to an Xbox

Nintendo offering try out Splatoon 3 before its release