In case you missed the memo, artificial intelligence (AI) is now encroaching into just about every facet of our lives, from recruitment and cybersecurity to ecommerce and even reputation management.

But creativity is one of the last remaining vestiges of human endeavor that is safe from the bony claws of algorithmic automation… for how long, though, is another matter.

Algorithms are increasingly stretching into the creative realm, with the likes of Google offering tools that replicate human drawings, Wix offering automated web design, Prisma transforming your photos into artwork, and Automated Insights generating sports and financial press coverage using nothing but numbers.

It’s against that backdrop that Albert Technologies is setting out to disrupt the digital marketing sphere with a AI platform that automatically generates campaigns for brands around the world. This week, Albert announced that it has raised a fresh $18 million in funding from institutional investors including Schroder Investment Management, Hargreave Hale, and Old Mutual Global Investors, adding to an initial $42 million it raised at its 2015 London IPO when the company was known as Adgorithms.

But this all just leaves us with one lingering important question: What, exactly, does Albert do?

At its base level, Albert crunches vast swathes of data and converts this into insights on which it acts autonomously to run optimized campaigns.

Digging down into the detail, Albert works across channels such as Facebook and Google to measure the impact and outcome of marketing campaigns, and then automates its own campaigns based on what it deems to be effective for a market segment.

Companies can feed Albert with their own creative content, such as slogans, images, logos, and so on, alongside their targets, while it can siphon data from the its database to figure out key characteristics of what a serious buyer looks like. Albert can then try to find other potential customers that matches those traits, known as “lookalike” audiences, and run its own trial campaigns on a small group of customers, before refining and launching it on a larger scale. 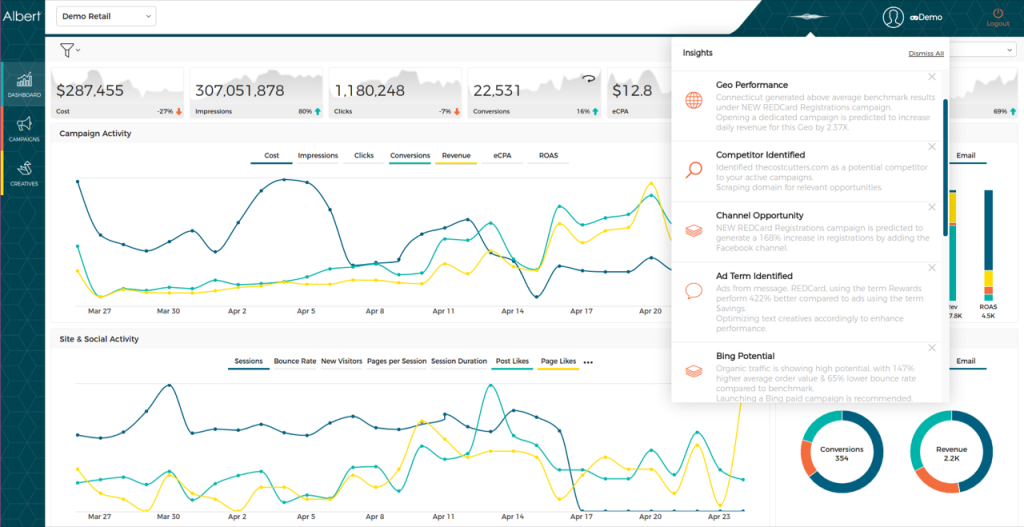 Above: Albert: dashboard with notifications

The story so far

Albert was founded out of Tel Aviv in 2010 by Or Shani, and was developed by a team of data scientists and engineers in the intervening years ahead of its 2014 launch. The startup was entirely self-funded ahead of its debut on the London Stock Exchange (AIM) in 2015, and then it entered the U.S. market in August 2016 ahead of Salesforce’s Einstein launch a month later.

In addition to targeting enterprises directly, Albert also offers its platform to advertising agencies who in turn can offer it to their clients. And with another chunk of cash in the bank, it will now look to build out its customer base in more markets and better service its existing clients, which include U.S. motorcycle manufacturer Harley-Davidson, luxury lingerie company Cosabella, Singapore-based food company Dole Asia, and Australian gift retailer RedBalloon

“In 2016 we launched in the U.S. market and demonstrated how an autonomous AI could execute convoluted marketing processes,” Shani said. “In 2017, our focus was setting up the company operationally to serve enterprise and agency clients, as well as refining our value proposition with these user types in mind. In 2018, all of this work will culminate in an expanded offering and exponential growth across regions.”

Albert shifted its official headquarters to New York City in 2017, were it currently counts 80 employees work, though its main R&D hub remains in Tel Aviv where it has around 100 employees at present.