Tens of millions of users evaluate their doctor’s visits with star ratings and written reviews on WebMD, Healthgrades, RateMDs, and other platforms. In theory, health provider scores aren’t a bad idea — as many as 80 percent of people trust online reviews as much as personal recommendations, studies show — but fraudulent submissions from bots, trolls, and other bad actors threaten to compromise their integrity.

“Reviews aren’t the end-all and be-all, but a good review written with some thought and nuance is like a referral from a trusted neighbor you’ve never met,” Chan told VentureBeat in a phone interview.

It’s a lot of data to keep track of. To date, CareDash’s users have contributed around 100,000 reviews across the profile pages of 3 million doctors and health care providers. But processes like statistical distribution modeling and risk modeling help find needles in the proverbial haystack.

“As we started to build this business, we ran into issues with folks trying to game the system,” Chan said. “We have to be the gatekeepers and make sure reviews are coming from real people. We reject thousands of fake reviews from bots.”

Reviews on CareDash aren’t published immediately, and they have to be approved. The company settled on an automated review approval process early on, although a human team still manually evaluates some reviews. The system was initially a tad aggressive — Chan said it only let through 20 percent of reviews — but over time, as engineers reviewed its mistakes and retrained its algorithms, it became better at distinguishing fake reviews from real ones. 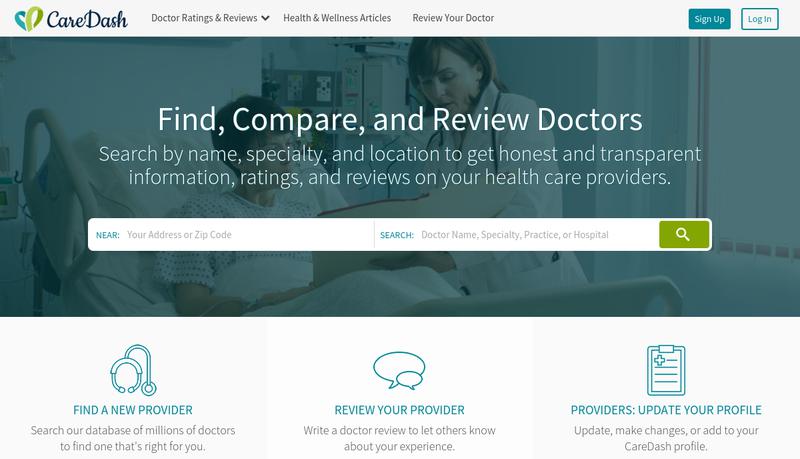 Above: A screenshot of CareDash’s homepage.

When it comes to fake reviews, some reviewers are themselves automated, typically under the direction of a botnet. Others are unscrupulous reputation managers and agencies, the nepotistic staff of a health system or private practice, or overzealous spammers.

“The traffic [of pages] is driven by how many reviews they show [search engines like] Google they have,” Chan said. “People take those ratings to be really important.”

There’s a good reason for that. A whopping 77 percent of patients use online reviews as their first step in finding a new doctor, a study conducted by Software Advice found, and as many as 47 percent say they would go out of network for a doctor who has more favorable reviews.

No matter the source of the reviews, CareDash’s system treats all of them with the same level of scrutiny, employing language processing to detect patterns in writing style and formatting. Reviews are rated using an internal scoring system, and suspicious similarities are immediately flagged for the team to peruse.

“There’s different levels of sophistication. The algorithms need a certain amount of training and data before they start to learn,” Chan said.

CareDash’s data science team recently expanded its purview beyond reviews to include physician payments from pharmaceutical and device companies. In the U.S., since the passage of the Payments Sunshine Act in 2010, health care providers and hospitals are required to disclose gifts, including food, beverage, travel, speaking fees, and more.

The company’s principal sources of revenue are advertising, co-registration, and portfolio-sharing with sister sites Well Within You and Unsugarize. It has raised $2.5 million to date from an impressive list of investors that includes Jeff Parker, former chairm and CEO of Thomson Financial; Food Network founder Joe Langhan; and former chair of McGraw-Hill Publishing Ron Schlosser.