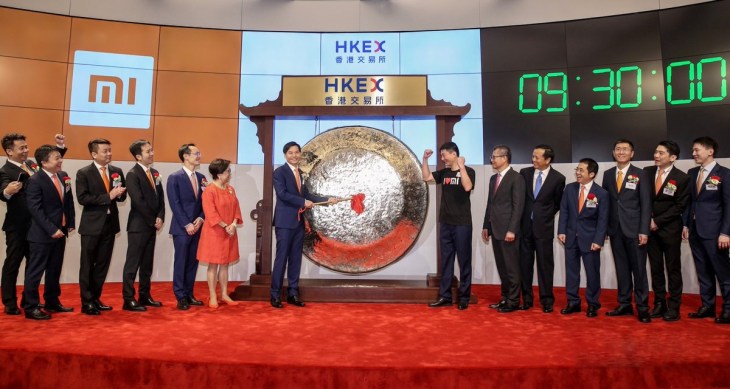 China’s Xiaomi, the world’s fifth biggest seller of smartphones, made an underwhelming public debut after it hit the Hong Kong Stock Exchange amid concerns around an ongoing trade war between the U.S. and China.

Media reports in the lead up to today’s bell ringing suggested that eight-year-old Xiaomi was shooting for a valuation of as much as $100 billion. In the end, it had to settle for a more modest $54 billion valuation as it raised $4.7 billion from the IPO.

CEO Lei Jun acknowledged that “global capital markets are in constant flux” thanks to tensions between Beijing and the White House, which has seen trade tariffs levied on each side. However, Lei — one of China’s most successful technology entrepreneurs — said that the situation doesn’t diminish his belief in his business.

“Although the macroeconomic conditions are far from ideal, we believe a great company can still rise to the challenge and distinguish itself,” he said in a speech at the listing ceremony.

Xiaomi enjoyed an understated debut. The stock opened at HK$16.60, below the list price of HK$17, and it quickly fell to HK$16 before later recovering. Its closing share price for the first day of trading was HK$16.78.

Aside from global market concerns, investors are said to have been unsure of Xiaomi’s ecosystem story. The company pitches itself as going beyond devices to offer internet services, such as video streaming, although it has yet to see significant revenue in the services category.

Prior to listing, Xiaomi pledged to keep its gross margin to just five percent to ensure that its products are well priced for consumers, but that requires the company to find other ways to monetize and that’s where the services play is aimed. Xiaomi also offers a long-tail of products developed by third parties, such as tech like smart speakers and non-tech items that include bags and pens, which it sells directly to its consumer base using its e-commerce sites and ‘Mi’ brand.

Finally, another core push is its international expansion plan.

China continues to account for the bulk of its revenue, although that is dropping. For 2017 sales, China represented 72 percent, but it had been 94 percent and 87 percent in 2015 and 2016, respectively. One market it has made significant progress in is India, where it was recently ranked the top smartphone seller thanks to a strong brand.

However, it’s unclear how the firm has performed in other markets in Asia and whether it can succeed in Europe, where it has made a push in recent months. The U.S. market is another key challenge that Xiaomi has yet to find a solution for, despite Lei Jun and other executives claiming it’ll enter the country before the end of next year.

You can read more about the Xiaomi business and IPO plan in our review below:

Note: The original version of this article was updated to correct Xiaomi’s valuation and target valuation.

Apple must allow alternative payments to Epic Games, US judge