Millions of car owners in the U.S. have yet to secure automotive insurance of any kind, which isn’t surprising considering the average policy costs a sky-high $1,099 annually. Recent estimates peg the share of uninsured drivers at 13% nationally, or one in eight drivers, with Florida topping the list by state at 26.7%.

It’s what led Derek Brigham and Kyle Nakatsuji, former colleagues at American Family Insurance, to cofound Clearcover in 2016. The Chicago, Illinois-based startup taps an AI tool trained on millions of data points to match vehicle owners with affordable insurance policies, and to expedite the claims-filing process with instant disbursements for repairs necessitated by accident-related damage.

In anticipation of growth, Clearcover recently closed a $50 million series C financing round led by Omers Ventures. The capital infusion, which Nakatsuji says will enable growth by accelerating the expansion of Clearcover’s geographic footprint, follows on the heels of a $43 million series B in January 2019 and brings the firm’s total raised to $108 million.

“The market is taking notice of how Clearcover is redesigning the model of running an insurance company in further service of customers,” added Nakatsuji in a statement.

Nakatsuji asserts that because Clearcover — which is available in Arizona, California, Illinois, Ohio, and Utah — runs a lean operation by opting not to advertise widely, it’s able to pass substantial savings onto its customers. Another overhead saver? Over 90% of policyholders prefer to use our award-winning mobile app to service their policy. As a result, their average service costs are 20% lower than the industry. 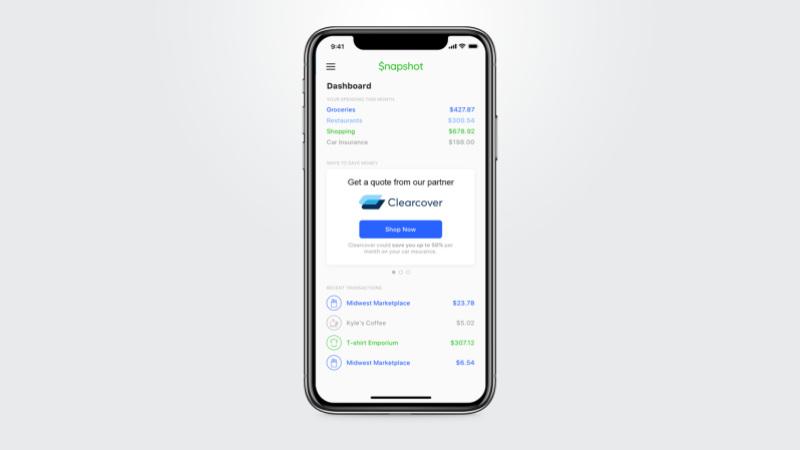 Clearcover also builds in lower rates for vehicles with advanced safety technologies and furnishes policyholders with funds for bikes or rideshares, and it relegates most policy management tasks to its mobile apps for Android and iOS. Speaking of, those apps let customers file claims digitally and offer features like a quick view ID card, which shows insurance information even when cellular service isn’t available.

On the backend, Clearcover has an API that integrates with personal finance apps, automotive websites, and insurance shopping websites to figure out which customers are seeking to buy car insurance. (Clearcover pays its API partners based on how many introductions to potential customers they’re able to make.) A visitor to one of the sites or apps might get an ad to check out a quote from Clearcover, many of which Nakatsuji claims are 15% to 40% less than quotes from large carriers.

But Nakatsuji isn’t concerned. He tells VentureBeat that Clearcover tripled policy sales year over year while quadrupling total premium. “This [latest] investment enables us to continue delivering deliver better coverage and great service for less money to more of the 230 million licensed U.S. drivers,” he said.

Omers Ventures managing partner Michael Yang intends to join Clearcover’s board of directors in the coming months, after which Clearcover plans to double the current headcount of about 100 employees across its product, engineering, and data science teams.