The world’s largest video streaming service fell short of its latest quarterly subscriber targets, so naturally pundits across the internet and Wall Street are busy engraving its tombstone.

“Netflix is falling off a cliff,” TechCrunch announced.

What’s remarkable is the short-term memory loss such analysis requires. Netflix’s subscriber growth, which has been dramatic over the past several years, is never a smooth upward curve. Sometimes it wildly outperforms in a quarter, as it did in Q1 this year. Sometimes it misses badly.

Just look at the miss in Q1 2017. Or in Q2 2016. This is just a thing that Netflix does. Why? The company actually tried to explain in its investors’ letter.

“As a reminder, the quarterly guidance we provide is our actual internal forecast at the time we report, and we strive for accuracy, meaning in some quarters we will be high and other quarters low relative to our guidance,” the letter says.

The company also included this handy chart, which shows the hits and misses for each quarter. Netflix has had three misses in the last 10 quarters, and seven beats, including a couple of quite large beats in Q4 of 2016 and 2017. 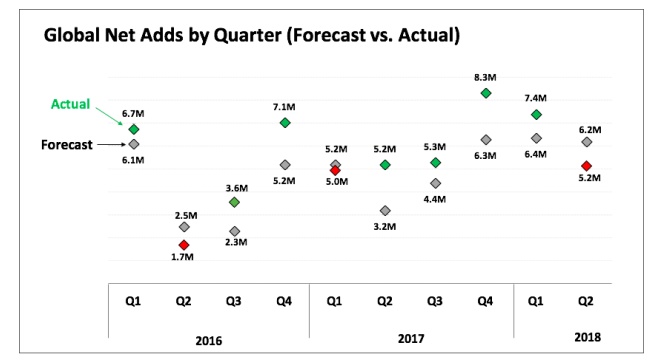 Still, most of this falls on deaf ears, as such explanations tend to do, whether the news is good or bad. When it’s good, the market overreacts. When it’s bad — same story. As a result, the company’s stock was down around 13 percent in after-hours trading. That’s hardly a disaster, as the stock has still doubled over the past year.

But this temporary blip masks Netflix’s growing might, something that will be particularly important now that HBO’s new owners are making noise about wanting to invest in and expand the service to better compete with Netflix. Indeed, HBO’s own streaming service has been doing quite well since it launched a couple of years ago.

So overall HBO has remained stagnant while Netflix has enjoyed a boom. But that still overstates HBO’s online prowess. As Bloomberg notes here, HBO has just 2 million streaming-only customers; the rest log in as an extension of their cable subscription account.

Worse, the company is hampered by other problems internationally. Its content outside the U.S. is still typically shown via other paid-TV services. In France, where I live, it’s shown primarily on OCS. Those services have their own streaming apps, and so HBO’s streaming apps remain blocked in many countries. Of course, HBO gets revenue from the relationships, but not much brand recognition. And in terms of expanding its relationship with those customers, well, it doesn’t really have a way to do that.

Of course, HBO likes to brag that it’s about quality, not quantity, a philosophy that appears to be a source of tension with its new AT&T overlords. But the fact is that even on the creative front, HBO has been slipping for a long time.

Yes, it still has Game of Thrones. Yet as that show heads toward its final season, HBO’s response seems to be ordering several more GOT-related series. Not really a sign of a creative renaissance. While it produces the occasional buzzworthy miniseries, it’s hard to think of a show on HBO that’s having the cultural impact of The Sopranos or the The Wire or Sex in the City.

As if to drive that point home, Netflix just broke HBO’s 17-year Emmy winning streak when it received more nominations, something Netflix bragged about in its shareholder letter. The knock against Netflix is that it is just cranking out a huge volume of shows. But while there are certainly plenty of duds, the Emmy milestone is still amazing for a company that just began producing original content five years ago.

HBO, by comparison, has had a several-decade head start. Compare that impact to Amazon Studios, which began producing series in 2013. Not even close — either in volume or quality — to Netflix.

Certainly, Netflix will have to continue pushing to increase those subscriber numbers as new competition comes online, including Apple’s foray into original content and Disney’s streaming service that’s set to launch next year. But perhaps sitting inside the U.S., where HBO has been such a cultural force for so long, obscures the global domination Netflix has achieved.

The former DVD rental service has become the largest producer of original video content on the planet. Its brand has begun to reach global recognition on the level of McDonald’s and Starbucks. No matter the pedigree of competitors or the ups and downs of quarterly subscriber growth, Netflix is going to be mighty hard to dislodge from its video streaming throne.