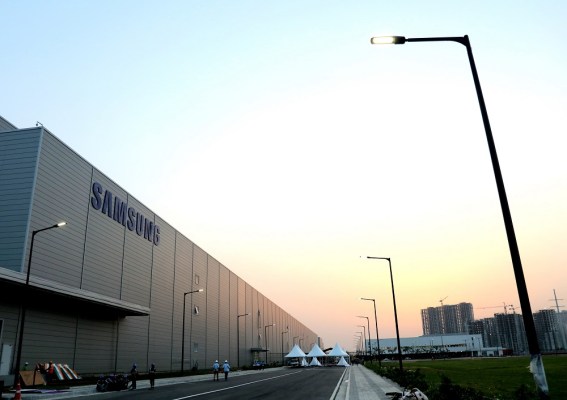 This week Samsung is opening what it’s calling the world’s largest mobile phone factory in the the world’s second largest smartphone market. Expansion, which will be fully complete in 2020, is expected to nearly double Noida (New Okhla Industrial Development Authority), India’s current phone producing capabilities from 68- to 120 million phones per year.

The electronics giant has been producing phones in the country for well over a decade (while the original factory dates back to 1996), while much of the competition has mostly been dabbling. Earlier this year, for instance, Apple started a manufacturing trial run of the iPhone 6S, after having previous done a small batch of the iPhone SE.

Along with bringing jobs, such localized manufacturing could also go a ways toward helping bring the cost of devices down. India’s government, naturally, is excitedly embracing the announcement as art of its “Make in India” initiative. As such, Prime Minister Narendra Modi was on-hand for the opening ceremony, along with South Korean president Moon Jae-in, repping his home country’s largest company.

“Our Noida factory, the world’s largest mobile factory, is a symbol of Samsung’s strong commitment to India, and a shining example of the success of the Government’s ‘Make in India’ program,” Samsung India CEO HC Hong said in a release tied to the news. “Samsung is a long-term partner of India. We ‘Make in India’, ‘Make for India’ and now, we will ‘Make for the World’. We are aligned with Government policies and will continue to seek their support to achieve our dream of making India a global export hub for mobile phones.”

India represents a massive — and growing — smartphone market. Last year the country passed the U.S., becoming the number two market after China. A commitment to local manufacturing will no doubt go a long way for Samsung, which currently ranks as the number two smartphone maker in the country, behind Xiaomi.