Some Spotify users were so annoyed by the recent Drake promotion that they asked for and were granted refunds, according to a report from Billboard. The streaming service had heavily promoted the artist’s latest album, “Scorpion,” even using his image on playlists that didn’t even contain his music, like “Massive Dance Hits,” “Best of British” and “Happy Pop Hits,” for example.

The promotion, dubbed “Scorpion SZN,” was the first-ever global artist takeover of Spotify’s service and the first time an artist took over multiple Spotify playlists on the same day.

While it’s not uncommon for artists to receive promotion on Spotify, some felt that the Drake promotion had gone too far — the album and Drake’s image were everywhere in sections like Browse and Playlists.

One Reddit user shared how they were able to obtain a refund from customer service, and that post soon went viral. The screenshot of their chat with the support rep has, to date, been viewed nearly 12,000 times. That transcript doesn’t indicate any official policy on Spotify’s part here, but was instead the efforts of a customer service rep helping retaining an individual’s business.

However, a few other people then tried similar tactics, and were also able to get refunds, they said.

Spotify isn’t officially commenting on the pushback from users, but Billboard claims the number of refunds were minimal.

It’s clear that the streaming service noticed the complaints, however, as it was responding to users on Twitter to clarify that things would soon be back to normal.

Hey there! We’re celebrating Drake’s new album and his spot as most streamed artist in the world right now. The Browse section and Playlists will be back to normal soon /JX

While Spotify has never refunded customers unhappy over a promotion — the larger news here is not the financial loss of those refunds, or even that they happened at all, but rather the damage this has done to Spotify’s reputation.

For those who complained, the problem wasn’t just that they weren’t Drake fans (though that’s obviously a part of it), but rather that they felt they were viewing advertisements when they were paying for a Premium, ad-free version of Spotify’s service.

Me: I’m looking for some good music..

Spotify: How about Drake?

Me: Eh.. Kinda in the mood for something else..

In addition, a heavy-handed promotional effort like this flies up against Spotify’s desire to position itself as a service that’s personalized to its subscribers’ musical tastes.

With Drake showing up all over Spotify playlists and recommendations, the overall effect was one of discounting users’ own interests — those who complained were likely not Drake fans or perhaps not even heavy listeners of hip-hop in general. As a result, they felt like Spotify was trying to push them to listen to music they didn’t like.

Though Drake is a hugely popular artist, there may not be an artist out there who could withstand a promotion like this. It’s just too much. After all, there’s a fine line between being excited about an album release and promoting it, and shoving something in people’s faces. Spotify crossed that line.

Billboard noted that some people had even compared this to the Apple/iTunes scandal when the company gave away U2’s “Songs of Innocence” back in 2014 by downloading it without consent to users’ iTunes libraries. But it’s not quite as bad as that. The issue was not one of stealthily downloading content to your device, which is far more of a violation.

That said, the user outrage feels similar: I don’t like this music, why are your forcing it on me?

Spotify’s original intention was to promote Drake’s album and the artist in a more playful way. It put Drake on the cover of its biggest Rap, R&B, Pop and Mood playlists, including RapCaviar, Beast Mode, Are & Be, Summer Party, Today’s Top Hits,  Morning Commute and others.

In those cases where Drake’s image was used on the playlist but not his music, the idea was that it would showcase the artist’s personality. But these efforts clearly fell flat. Users were confused as to why Drake was appearing on playlists that didn’t make sense — like those featuring a different genre of music.

The album broke the U.S. one-week streaming record for an album in three days, Billboard also reported, and the album was being streamed more than 10 million times per hour the weekend of its release, Spotify said. The album is estimated to reach more than 700 million streams in the U.S. by the end of the tracking week on July 5.

Not everyone thought the promotion was that big of a deal.

Some people said that while they noticed the suggestions, they just bypassed them and listened to their own music as usual. But even then, some sympathized with those who complained that this felt like an advertisement on what’s supposed to be an ad-free service. 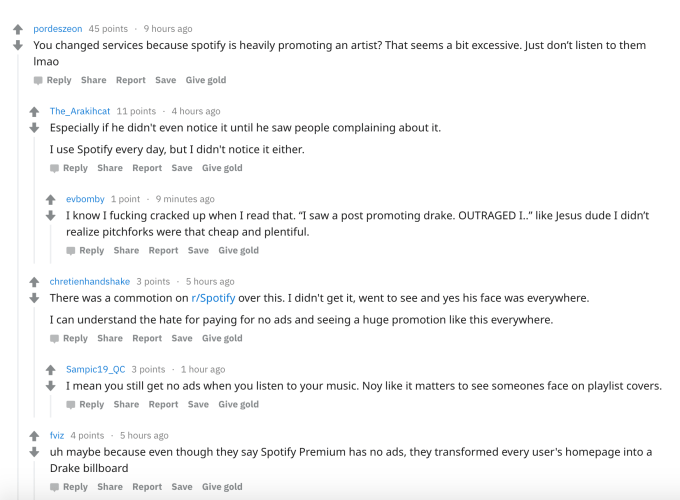 Spotify collaborates with artists on promotions — the details of Drake’s takeover weren’t dictated. (In fact, it’s not even the biggest promotion from a financial investment standpoint.) So Spotify will likely chalk this up to a learning experience that may help it craft better promotions in the future that don’t involve as much overreach.