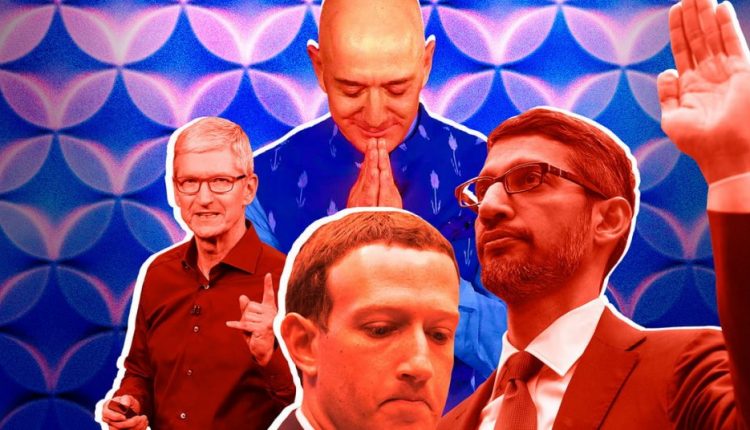 Over the years, the one criticism Big Tech has been unable to overcome is the ongoing dialogue about how these companies’ seemingly boundless power is a threat to the open market and needs a more strident set of regulations.

Last week, the CEOs of four of those companies — Facebook, Google, Amazon, and Apple — appeared in a virtual antitrust hearing to address whether they are turning into monopolies.

The downfall of another Big Tech threat

Over the past weekend, TikTok, which has been accused of siphoning American user data for the Chinese government, was served an ultimatum by the Trump administration: Either sell your U.S. business within 45 days or exit the country altogether.

One of the leading contenders to take over TikTok is Microsoft, another giant tech corporation.

“Microsoft fully appreciates the importance of addressing the president’s concerns,” Microsoft wrote in a blog post on Sunday. “It is committed to acquiring TikTok subject to a complete security review and providing proper economic benefits to the United States, including the United States Treasury.”

TikTok has emerged as the outsider whose viral rise to the top has caught companies like Facebook off guard. Handing its reins to Microsoft, the second most valuable publicly traded company, is ironic to say the least — especially at a period when Washington is increasingly investigating the magnitude of these tech giants. But Trump and his administration have focused in on TikTok, calling it a national security danger.

In a span of two years, TikTok has managed to capture the attention of an entire generation, soaring to more than 80 million active users in the United States alone. In cpmparison, Facebook-owned Instagram, which has been operating in the U.S. for a decade, is said to have 110 million active users.

TikTok has also been able to take giant revenue leaps and evolved into advertisers’ favorite platform for targeting Gen Z. While the video app’s expected $500 million U.S. revenue this year is a far cry from the billions Facebook and Google earn every quarter, it’s an impressive feat for such a young service.

With its soaring figures, TikTok has been a topic of worry for both Google and Facebook. However, if Microsoft takes over, the Big Tech ascendancy will remain unabated.

Trump’s single-minded focus on TikTok — while ignoring similar privacy concerns at other Big Tech apps — undermines and undoes the several official investigations being conducted on the expanding scale of these tech firms.

Since TikTok in the United States is expected to run separately, the move will also knock millions of overall views from the platform, hurting both creators’ and the video app’s own revenue. Meanwhile, Facebook is already testing its own TikTok competitor: Reels. Concerns over TikTok shutting down may drive creators directly into Facebook’s open arms — further increasing its power.

TikTok isn’t the only Chinese company targeted by Trump, of course. The Trump administration has spent the past year crippling the business of Huawei — the top global smartphone maker last quarter. Thanks to its in-house line of chipsets and ample resources, Huawei is the one corporation that can put a dent in Apple’s dominance in the U.S. smartphone market.

More importantly, Huawei has been able to build a line of software services with an enormous reach globally, and even has the potential to eat into the app store monopolies Apple and Google run. With them out of the picture, consumers will have little choice in where to go.

By forcing these companies out, the government is also taking the easier route and sidestepping issues like the absence of end-to-end data protection laws. The personal data of U.S. citizens is still mined in astounding quantities. Forcing a TikTok sale won’t change that.

The takedown of two key Chinese tech companies in quick succession offers Big Tech assurance that they don’t need to worry about competition from the world’s biggest economy. It fosters an ecosystem where four of the biggest tech companies can respond to questions from Congress by understating their respective size one day, and the next day announce record quarterly profits even when the rest of the economy is crumbling.

It’s nearly impossible for an American company to start from scratch today and take on the giants irrespective of how popular it becomes. The only potential competition Big Tech has is from Chin,a and with that out of the question, the day when it will be even remotely possible for us to quit Big Tech may never come.

Apr 9, 2021
Yahoo Answers, one of the internet’s longest-running Q&A forums, will finally be shutting down after almost 16 years of service to curious internet…