Twitch has one of the largest and most dedicated audiences on the internet, but it is still difficult to carve out your own following on that platform. The company announced today that it is working on a broad initiative to help people discover content that they’ll like and to help broadcasters attract new fans. 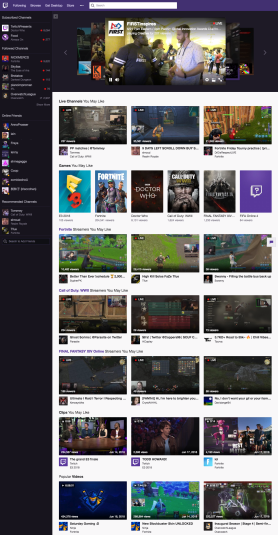 Above: The new Twitch homepage with tons of recommended content.

The company has launched a page on the collaborative working site Trello to give viewers and livestreamers transparency into what Twitch engineers and designers are working on. For example, it is planning to rework its homepage to replace its social-networking-like Pulse tools with more recommended channels, according to a blog post by Twitch product manager Tom Robertson.

You can see in the image to the right, which Twitch posted as a heads-up to streamers on its Trello, that it is looking at various categories and offering up channels and clips. The company said it is looking at your past behavior, and it will offer up a customized home page specifically for you.

“Whenever we talk with streamers about how Twitch can help them, how to find an audience is one of the topics that comes up most often,” said Robertson. “With more than 2 million streamers and counting going live on Twitch each month, it’s easy to understand why this is top of mind.”

Twitch has always worried about discovery, but it has prioritized viewer experience, technology, and monetization higher for years now. But it is in a strong place with many of those aspects, and now the platform is so large that it does feel like you can never stand out as a creator. Robertson says that his team are going to do a lot more to improve that situation.

“We don’t believe Twitch should be a popularity contest,” he explained. “So much of what makes Twitch special are the interactions between streamers and their viewers and viewers chatting with each other. Some people want to feel the roar of the crowd and rally around epic gameplay, while others want a more intimate experience with familiar faces. Since finding the right communities and new streamers to connect with can be difficult, we’ve been working on ways to make forming those long lasting connections easier even as we grow.”

Other features coming to Twitch include detailed tags that enable broadcasters to better describe their streams for searches as well as an update to channel pages. Soon, when someone shows up at your page, they will see more panels, videos, and clips. They will also see the follow and subscribe buttons more prominently.

Of course, all of this is not going to make your livestreams better. If you want to grow a following, you still need to broadcast on a rigid schedule, you need to interact with the audience, and you need to be able to beat the tutorial of Cuphead.