You know what sucks? A good vacuum. And we’re here to find the perfect one for your everyday needs. We know that finding the best vacuum cleaner can, well, suck – there are just so many models to choose from, and who really wants to spend their time finding an appliance that means more work around the house?

The thing is, vacuum cleaners have come a long way since the days where you had to haul out that massive corded behemoth from your hall closet and plug it into a new socket every few minutes. Compared to some of the slick vacuums on the market today, that’s practically medieval.

Today’s vacuums are much slimmer, and while most are still controlled by hand there’s a growing number that have robotic brains and can clean up all on their own. Many of today’s vacuums also run on battery power, so you won’t have to worry about dragging cords all around your house.

While it’s still a ‘chore’ in the traditional sense, vacuum cleaning can now be done in far less time and with far greater ease thanks to cordless vacuums. But if even that sounds too hard, you’ll likely be chuffed to learn that most robot vacuums can be set on a schedule, so they’ll even clean your house while you’re out living it up (or working).

It’s true that high-end vacuums can be quite costly, but they can also be the sort of investment where the benefits become almost immediately clear. As soon as you’ve experienced the added ease and efficiency first-hand, it’s hard to go back to anything else.

Whether you’re after a lightweight cordless, a super-powerful upright or the kind of brainy robot cleaner that’d give Will Smith night-terrors, these are the best vacuum cleaners currently available in Australia. They all suck, but in the best possible way. 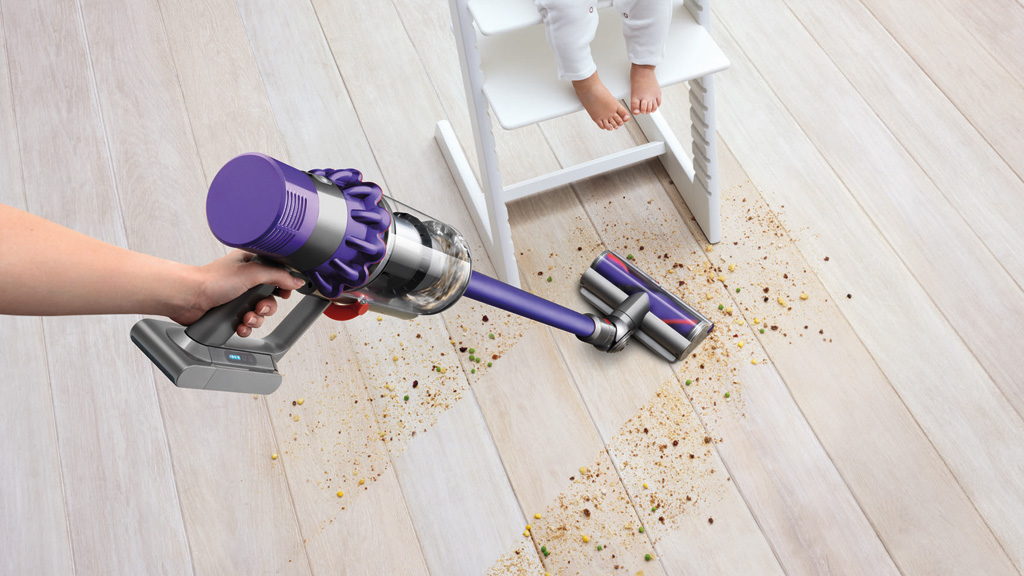 Dyson’s so confident in the sucking prowess of its newest vacuum, the Dyson Cyclone V10, that the company is ceasing the production of new corded vacuums going forward. When you consider how many corded vacs it still sells, that’s a pretty big statement to make. Thankfully, the Cyclone V10 can back it up – and then some.

Simply put, the Cyclone V10 is the best vacuum Dyson has ever made. Dyson has redefined its cyclone technology to produce more suction power than ever; the new V10 digital motor is 20% more powerful than the previous V8, and, we can assure, it sucks a lot (we mean that as a compliment).

You’ll notice a number of crucial changes between the V10 and older V models. For example, the barrel is now front-facing, and all attachments connect here directly. This design allows for greater suction efficiency, according to Dyson. The V10 is smarter than ever before, too, and can even detect differences in altitude, air pressure and temperature, and auto-adjust itself for maximum performance.

Prices and models vary across regions, but needless to say, you pay for the Cyclone V10’s souped-up suction. And while the Cyclone V10 is more powerful than ever and boasts a more energy-dense battery than previous models, putting it on the highest setting will drain the battery in about five minutes. At the lowest setting, however, you’ll get up to 60 minutes of use, and that should be plenty for your everyday messes. 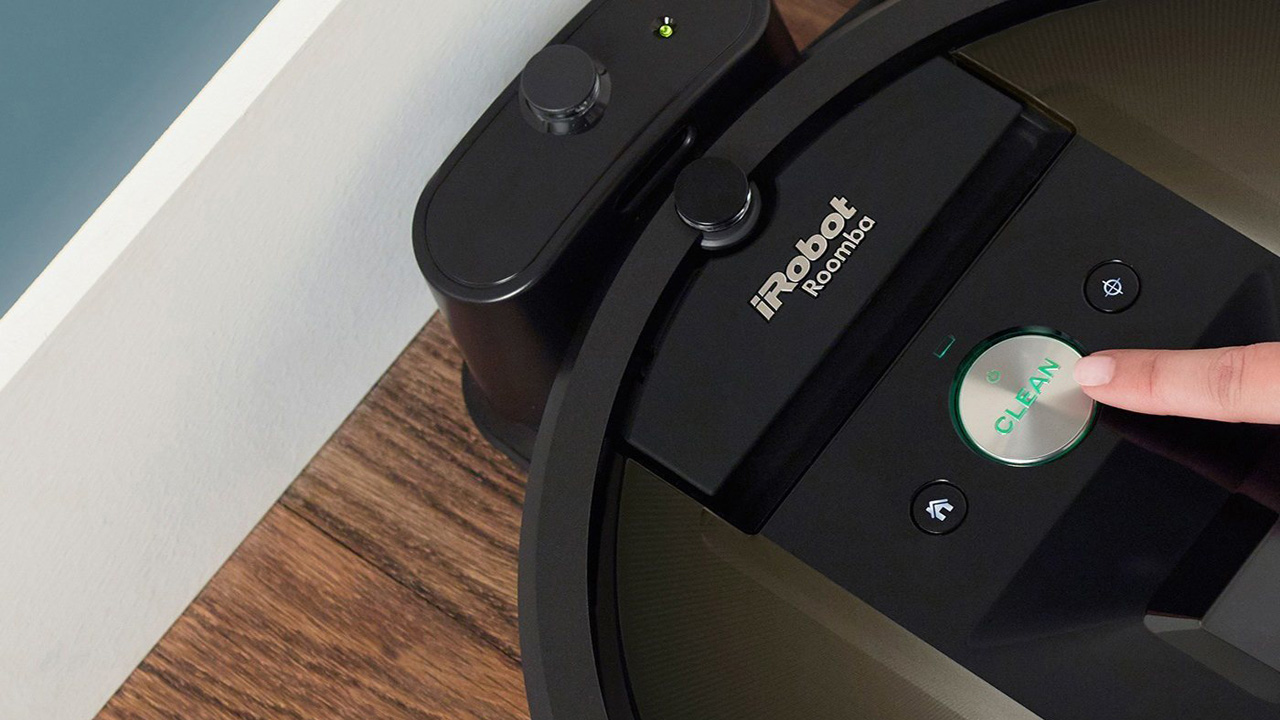 Dyson might be dominating the handheld vacuum arena at the moment, but when it comes to the robot vacuum space, many people rate iRobot and its Roomba 980 vacuum cleaner at a similar level of esteem.

With its low-clearance design and smartphone app control functionality, this dirt-sucking disc is intelligent enough to go about its business in your home without much prompting on your part. The Roomba 980 will intelligently map your home for problem spots, kicking into a high-power mode whenever it rolls over carpets, and weaving around chair legs and other potential obstacles.

Making things even easier, you can manage the Roomba 980’s daily schedule from the device’s accompanying iOS and Android apps, allowing you to set the time and duration of its cleaning routine however you see fit. You will have to empty it out after each use, though.

With an impressive two hour battery life, it’ll also manage a longer cleaning cycle than any cordless or robot vacuum from Dyson, and when it’s running low it’ll automatically head back to its dock to charge itself.

Other smart features of the Roomba 980 include its battery-powered Dual Mode Virtual Wall Barriers which you can place around your crib so that your ‘bot will know which areas to avoid, such as rooms you don’t want it to enter or floor-level pet food bowls you don’t want it to crash into.

However, the Roomba 980 does still have some room for improvement, with its app being a little sluggish at times. The robot also has a tendency to get trapped in cables and stuck under furniture.

Sure, it’s pretty pricey for what is admittedly a cleaning luxury, but it really is like having a robot maid that will keep your place clean. If you hate vacuuming and can afford it, the Roomba 980 offers exceptional cleaning convenience. 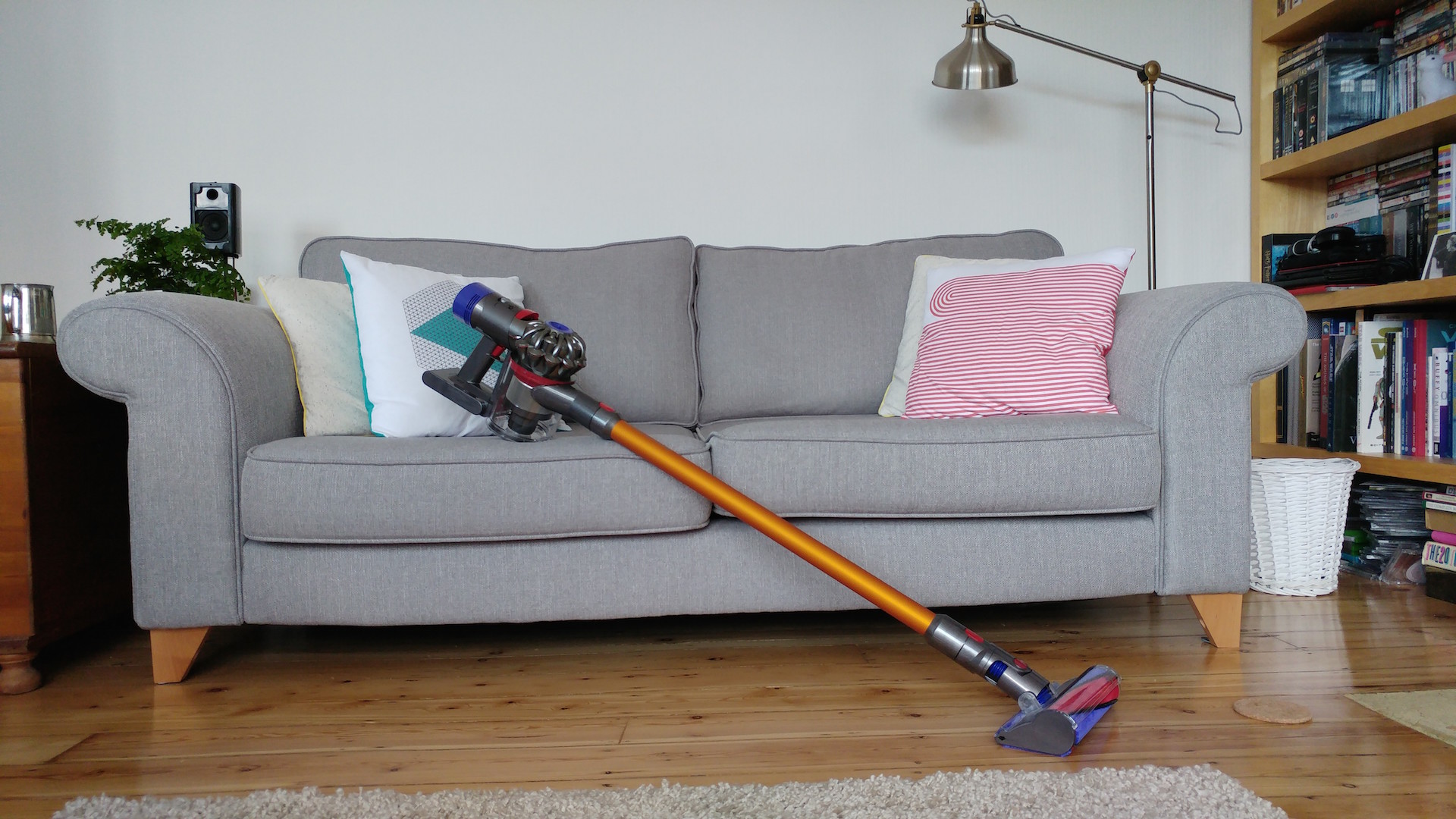 Until recently, it was the best cordless vacuum experience that money could buy, and while it’s been dethroned by Dyson’s own Cyclone V10, the excellent Dyson V8 Absolute is still a top-of-the-line battery-powered vacuum cleaner. It also remains an absolute joy to use. (See what we did there?)

The first thing you’ll notice is its lightweight design. With a removable extender pole and equipped with six different heads for different surfaces and use cases, the V8 Absolute is easy to manoeuvre and run around with, especially when you want to point it up towards the hard-to-reach corners of your house.

But with the suction motor in the pistol-grip handle area, you can take the extender pole out of the equation and clip a head directly onto the main unit, turning the whole thing into a portable cleaner that’s perfect for getting into smaller areas or for other tasks, such as going up the stairs of vacuuming the interior of your car.

A full-charge will give you around 40 minutes of use, which is really impressive for a cordless cleaner – though mileage will vary once you start using the motorised heads, or switch on the V8 Absolute’s MAX mode, which will blast through your battery in minutes.

You’ll rarely need that extra suction though – for a handheld, this cleaner can rival an upright for sheer dirt-sucking power, even when its on its medium setting. It’s got a pretty large bin, too, which will take in plenty of dirt before you need to empty it out – another convenience not often seen in cordless vacuums.

Best of all, now that it’s been superceded by the Cyclone V10, the Dyson V8 Absolute works well as a cheaper alternative, with the vacuum now available for under $700 at some major online retailers. 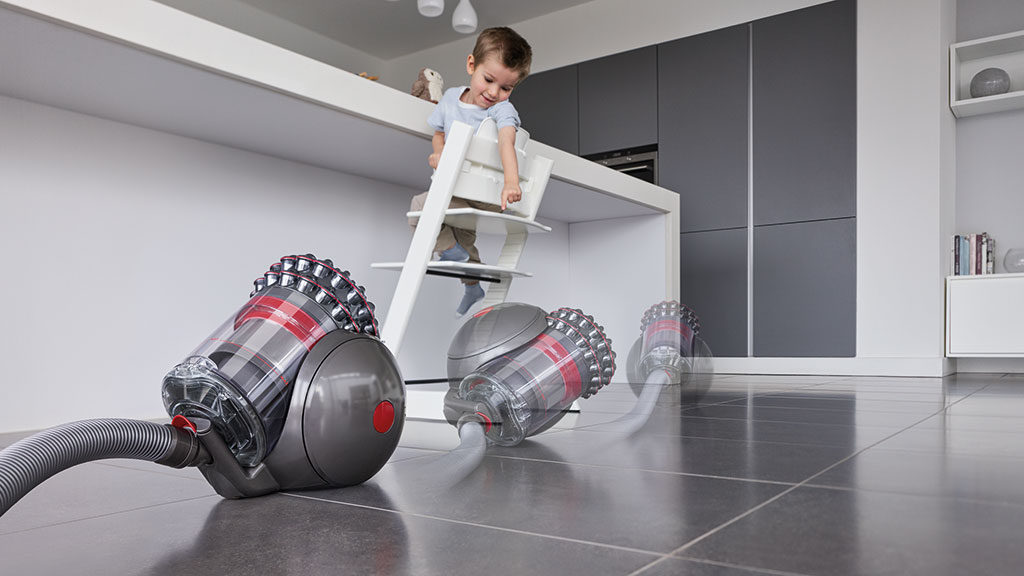 There’s no question that Dyson’s manoeuvrable and endlessly convenient stick vacuums are incredible, sporting powerful suction and a modular design that allows for a number of area-specific attachments – all without having to worry about pesky cables getting in the way. However, cordless vacuums do have their caveats.

Getting a limited amount of vacuum time from a battery that takes hours to charge can be extremely frustrating, and there are times when you may require a more powerful and heavy-duty vacuum solution. Cordless models are often pretty darn expensive, too.

If you share these concerns, Dyson’s Cinetic Big Ball vacuum may be a terrific alternative, offering the same quality cleaning experience that the company’s vacuums are known for, while avoiding all the usual annoyances that make inspire people to choose a cord-free option.

Most vacuums will tip over as they’re dragged along the floor — not the Cinetic Big Ball, with its ball-shaped design that has been perfectly weighted to roll back into place whenever it falls down — it’s a neat example of Dyson’s knack for finding solutions to problems that have plagued these kinds of products for decades.

Another advantage over cordless vacuums: its suction power leaves them in the dust — literally. At 250 air watts, the Cinetic Big Ball is even more powerful than the new Dyson Cyclone V10, which offers around 150 air watts of suction.

Taking into consideration that you can now pick up a Dyson Cinetic Big Ball for under $500, and what you have is a highly-recommended alternative to Dyson’s pricier cord-free options. 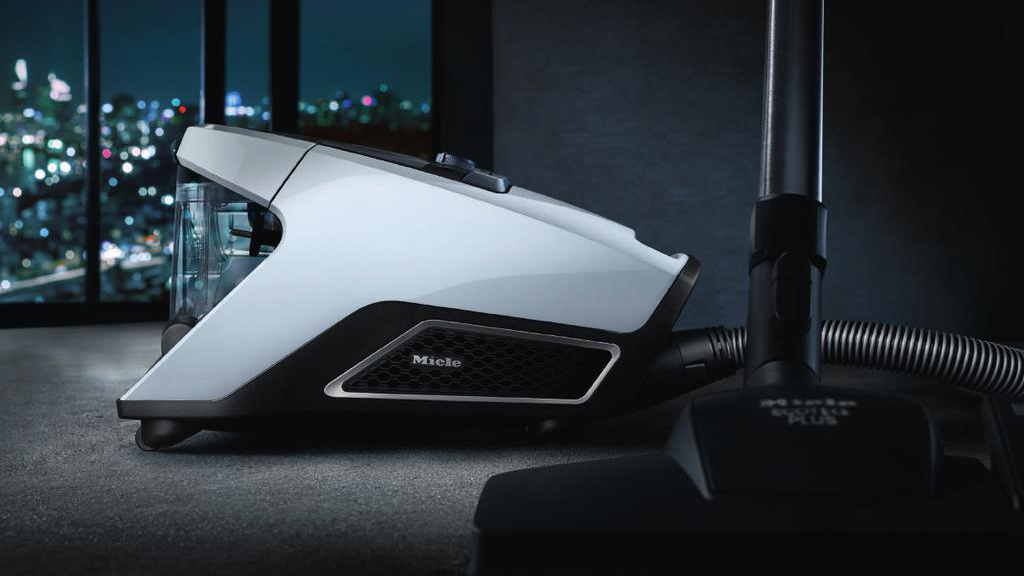 Like most Miele vacuums, the cat and dog version of the CX1 is a little more expensive than the non-pet versions, but that extra cost is offset by the additional attachments you get that will help you round up and deal with shed hair and the general mess that comes from having four-legged members of your family.

Plus, when you consider how affordable it is compared to the average Dyson product, the price of the CX1’s ‘deluxe’ model will seem quite reasonable.

We also love that it’s got an AirClean lifetime HEPA filter to remove allergens from your household, as well as an extremely high airflow that works hard to remove as much dust and debris from your floors and carpets as possible. It’s also the first bagless Miele device, and it does a pretty darn good job of that, too.

Boasting a 1,200W “Vortex” motor, the Miele Blizzard CX1 Cat Dog Bagless delivers an air speed of more than 100km/h and still manages to separate dust into two types: coarse stuff goes into the clear dust container, while the finer stuff is caught and trapped in its own filtered container.

Impressively, the Blizzard CX1 also sports a new CleanStream filter, which has a sensor-controlled self-cleaning system. You’ll still need to clean the filters yourself on occasion, though.

That’s not the only big change Miele has in store for us: the design is also quite modern-looking, putting the device in a league above its predecessors. For a vacuum that goes for less than $500 at some stores, Miele has certainly stepped up its game with the CX1 Cat Dog Bagless.