Lego has long been regarded as among the most creative of children’s toys, encouraging the nurture of design skills, and letting young hands make their first steps towards architectural greatness. Likewise, the more advanced Lego Technic line has fostered an interest in mechanics and engineering, with its motorised components and remote controlled models requiring a little more expertise to assemble.

But thanks to an ongoing partnership between Lego Technic and Volvo, the two companies are looking to an even more exciting future – autonomous vehicles. And they’ve enlisted the next generation of engineers – Technic obsessed children – to help in the design. 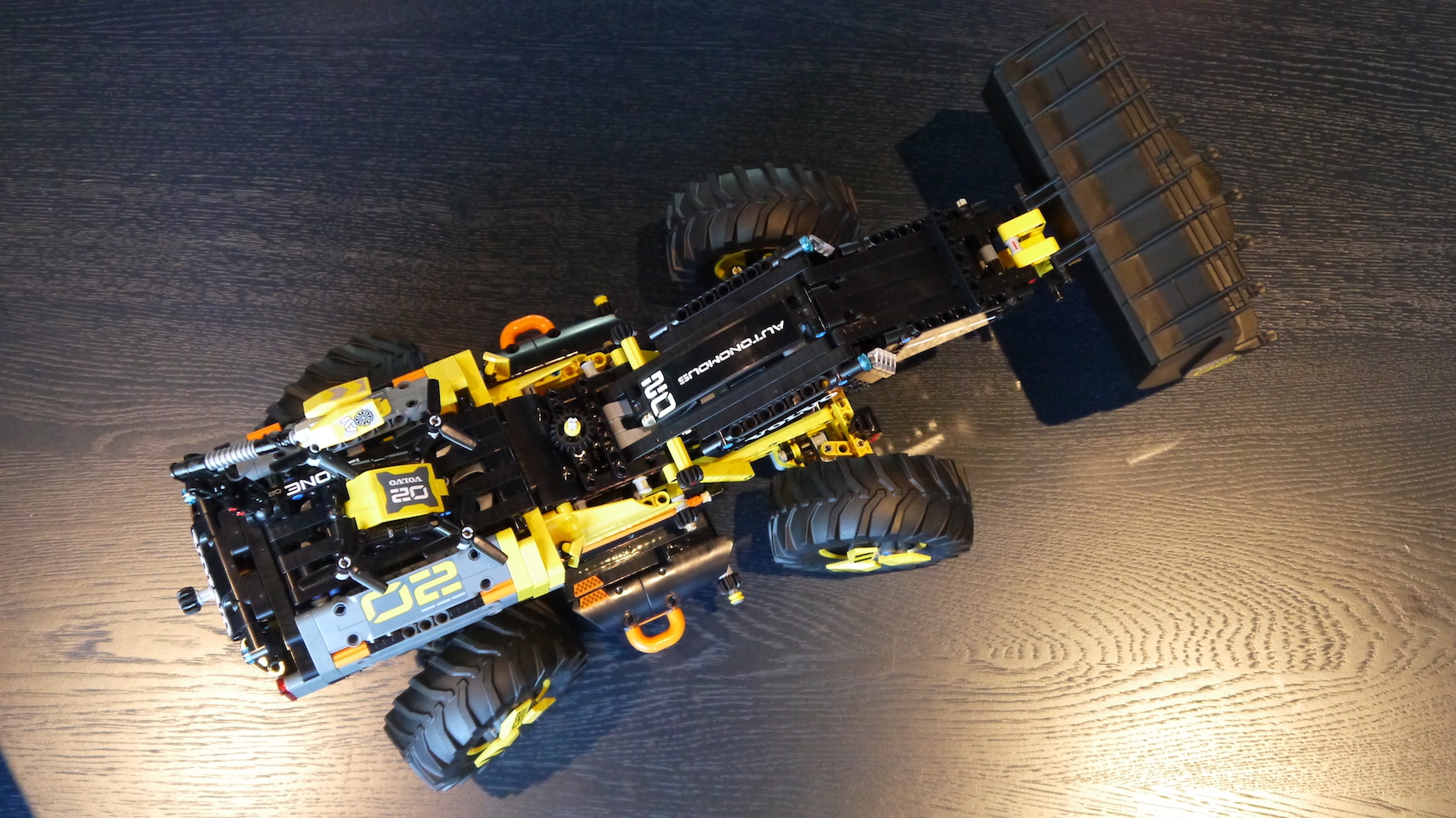 The Zeux is the latest entry into the Lego Technic line, a 1,167-piece wheel loader that comes with articulated four-wheel steering, a working boom and bucket and an active counterweight that raises and lowers the chassis.

It’s the impressive result of a collaboration between the two companies, which now stretches back to 2016, and is inspiring Volvo’s autonomous vehicle ambitions, with elements of the Zeux concept now patented with the intention of introducing them into full size, industrial-working models.

“One of the coolest things about this is that it was a true collaboration, a mixture of Volvo designers and engineers and Lego Technics designers, capturing that knowledge of how real machines should work, how it could be more efficient and effective, and letting the designers go crazy,” said Andrew Woodman, Senior Design Manager for the Lego Group. 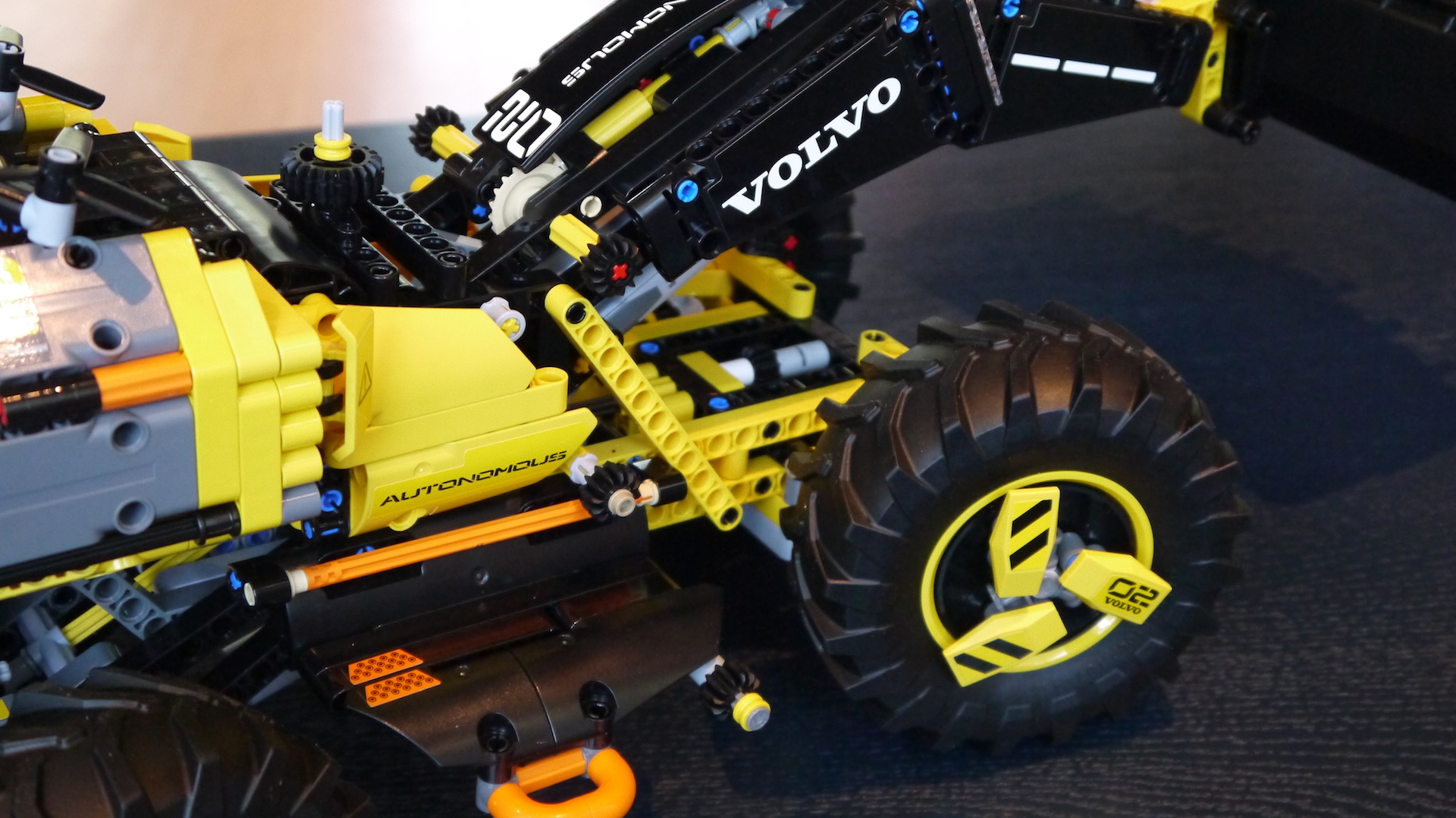 “Not having restrictions, but having the ability to put things together in a whole new way was something really interesting. The mixture of the teams, and the energy that created, was beneficial to both groups.”

From Wall-E to a child’s possible reality

The final rendered model, intended as a blueprint for future AI-driven vehicles, appears far more personable than most of the relatively-faceless autonomous vehicles we see in development at the moment. There’s a hint of Pixar’s Wall-E to the Zeux – and that’s in large part thanks to suggestions offered by children involved in the design process.

“For Lego, children are the heart of what we do,” continued Woodman. 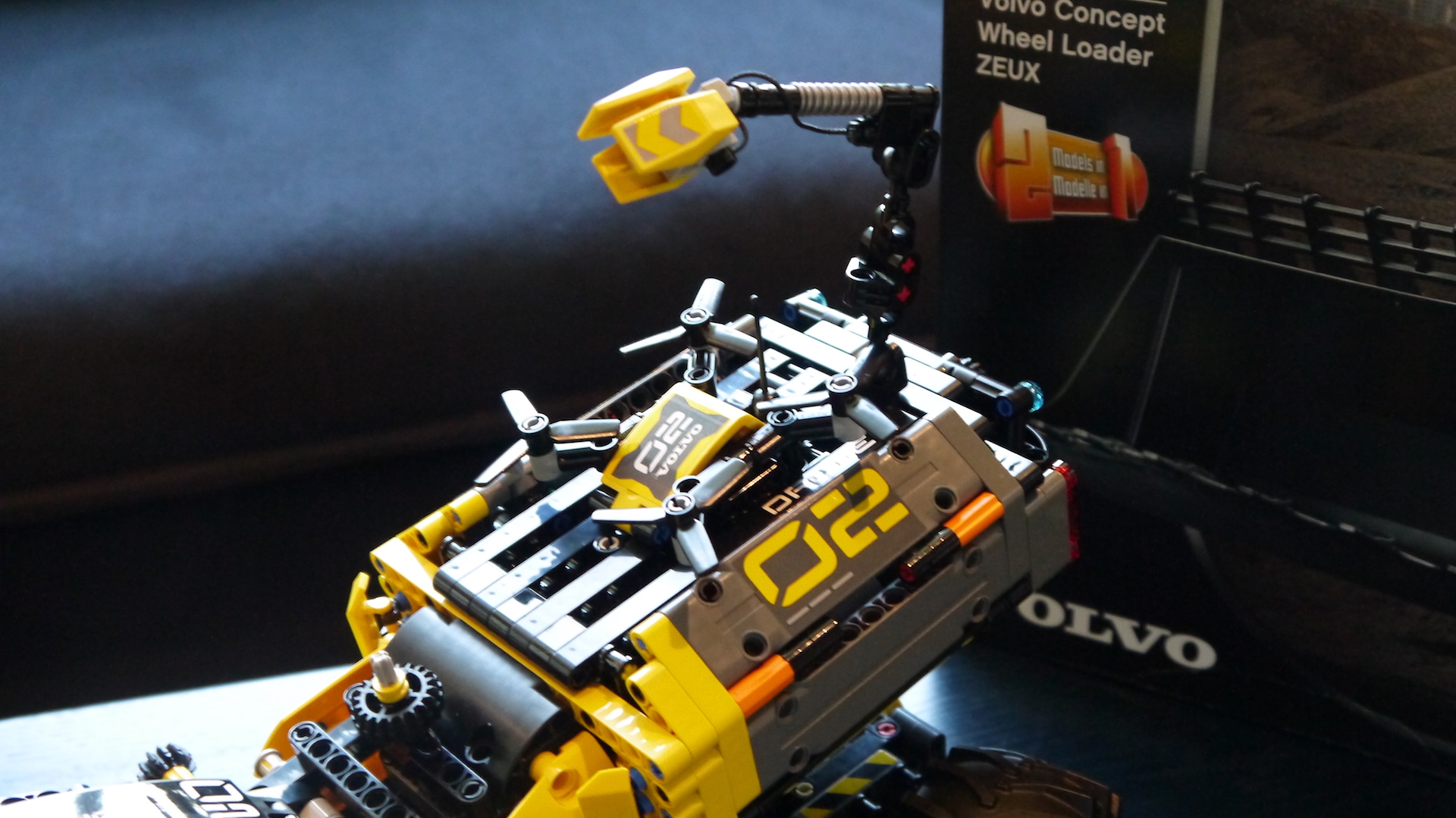 “This project was no different. This time we collected the three favourite directions that we had from the different concepts at the time, we benchmarked it against the very first product we did together with Volvo, with the intention of focussing in on the wheel loader aspect of it.”

With the Zeux intended to be a conceptual showcase for construction products of the future, it proved particularly insightful into the expectations of which children have for the world around them as they grew up. And, with the design resulting in numerous patents being awarded and elements being worked on for real-world application, in this project the children also had the chance to influence an element of the future they’d perhaps eventually grow to be a part of.

“By putting it in front of the kids, letting them play with them and come with their own stories, that’s when we see things really come alive. When we’re testing stuff, it’s not just a case of ‘oh I like this, oh I don’t like this.’ It’s when they tell stories about how they’d play with it and use it, and how it’d be used in the real world, that’s when we really start discovering what the right functions are and features to use. 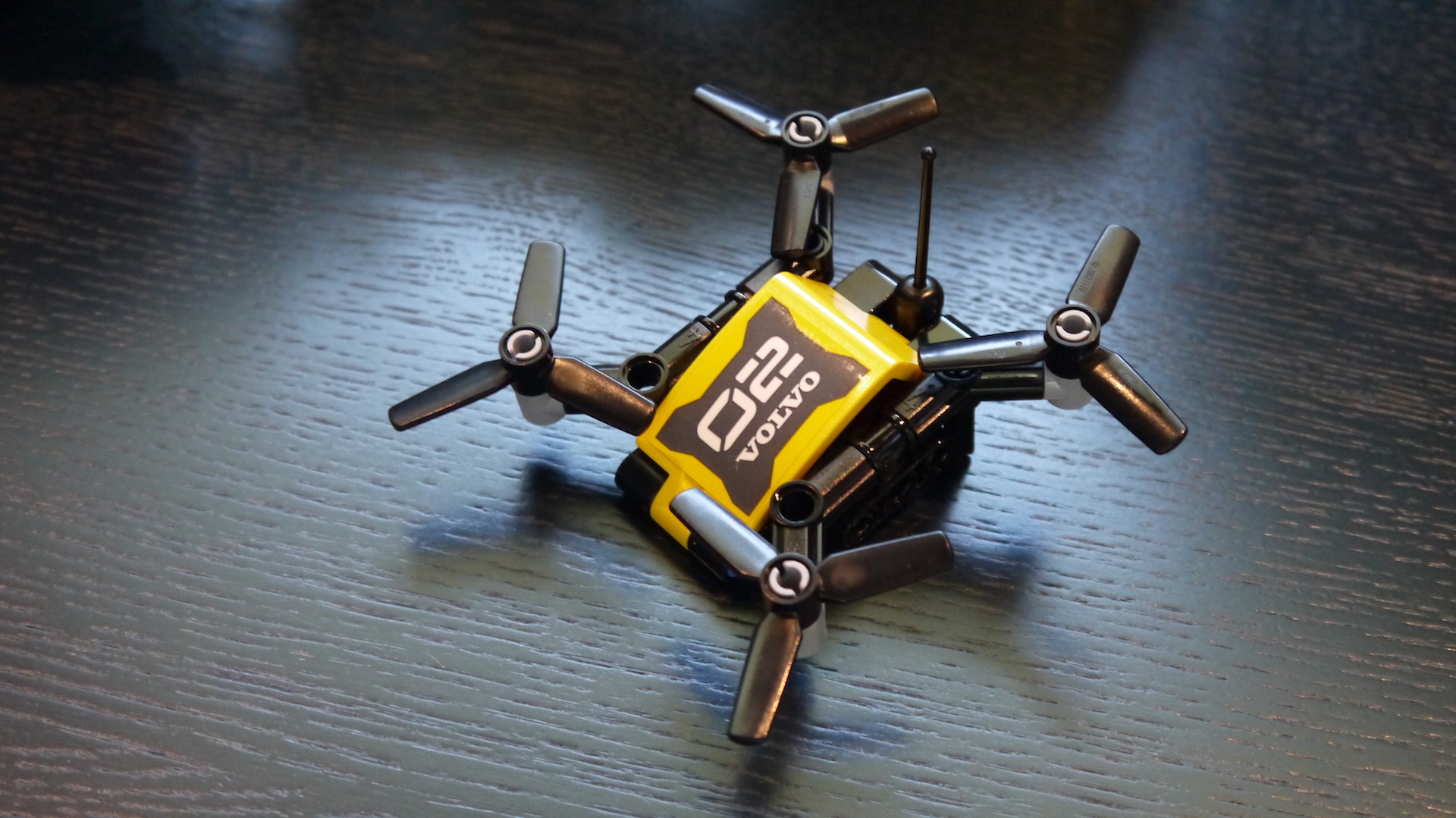 The small mapping drone that’s present with the models was one key feature that the children in the testing groups insisted upon, and points to the level of familiarity and easiness with which youngsters are already approaching concepts around autonomous creations.

“[The children] don’t even see or think about the driver, the machine would be controlled through the drone. That for them was instant – that’s just the way it should be, the way it is. They don’t even think there’s something missing, which is really cool.” 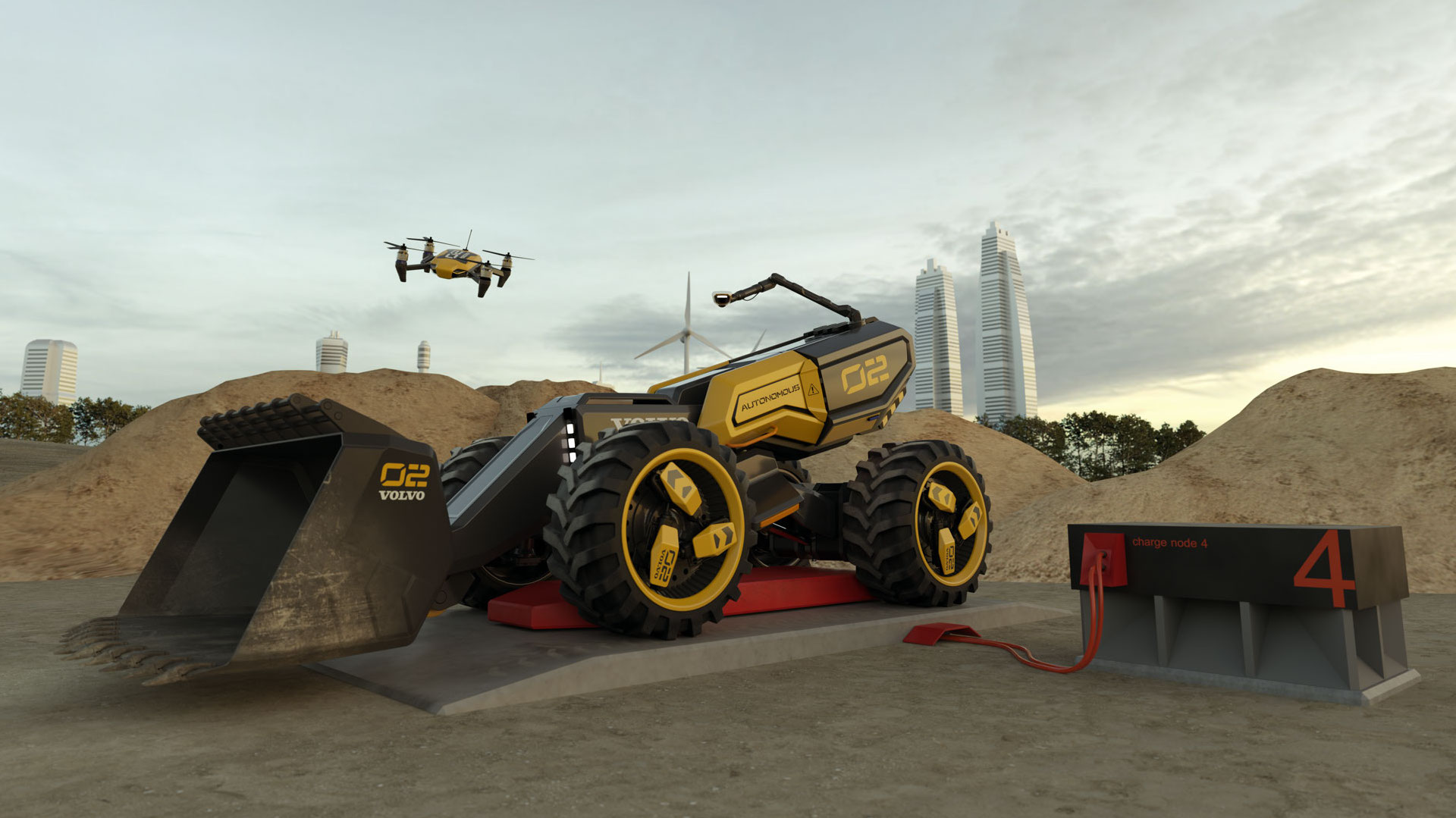 Likewise, the “personable” camera eye, conceptually rendered to be expressively moving around on an articulating arm – letting you be aware of the autonomous vehicles point of focus, and giving it its Wall-E like personality – was a design consideration reinforced by the influence of the children involved.

“[The camera is something] we’re really proud of, as it’s letting you connect as a person with an autonomous vehicle,” said Woodman.

“When you walk in front of a car parked at a junction you instinctively make eye contact with the driver. You then make a series of decisions in order to know it’s safe to cross, based on that eye contact. If you have a vehicle with no way of communicating with you, even if it could never run into you, or move with you around – but you don’t know that. So the kids stories helped with the camera to personalise the autonomy.”

While the Technics model measures 18cm, any realised full size Zeux would weigh more than 13,000kg, and measure just over 6 meters long, running fully autonomously off an electric battery.

“There’s a little bit of a blank spot on the map with autonomous products. You have the cars already, planes, drones. You’ve seen those before. But what is this? It’s not a people transporting product. It’s more like something you work with – a co-worker almost.

“The closest relative would be maybe Wall-E from the Disney movie, or maybe even a Transformer or something like that. We’re very excited about this.”

The Lego Technic Zeux concept wheel loader will be in shops this August, with prices for each market to be determined. As for the real thing? That’ll be some time further into the future, one that will have been, in part, designed by the children of today.